My dam, my water 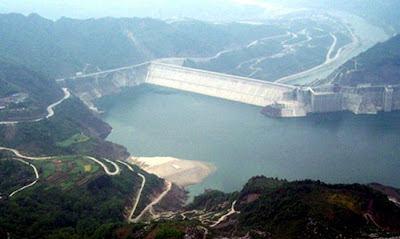 The problem is that nations or states are always ready to 'share' water with others living upstream, but their perception changes when the question comes to 'sharing' with lower riparians, says Claude Arpi after attending a 3-day conference in New Delhi on conflict resolution in the faceoff over water

The ban on the release of a new movie in Tamil Nadu made it to the front page of the national press. Why? Because the film deals with an extremely hot issue, water.
Dam 999, produced by BizTV Network from the United Arab Emirates and directed by Sohan Roy, is based on the award-winning documentary Dams - The Lethal Water Bombs and the Banqiao dam disaster which claimed 250,000 lives in China in 1975.
Tamil politicians immediately saw a parallel with the Mullaperiyar dam in Kerala. Fears have been exacerbated after the 116-year-old dam developed cracks following mild tremors recently experienced in the region.
While Tamil Nadu, beneficiary of the water released from the dam, continues to demand an increase in the height of the dam, the government of Kerala (the dam, controlled by Tamil Nadu is located in Kerala) believes that the life of several lakhs of people is in danger, and Tamil politicians reacted quickly and forced theatre-owners in Tamil Nadu to boycott Dam 999; it is against the interests of the state, they say.
The dispute has been pending in the Supreme Court for years. Kerala had argued that the agreement on the Mullaperiyar dam giving Tamil Nadu a 999-year lease over the dam was signed during the Raj by Madras Presidency and the Raja of Travancore and is therefore invalid. At the same time, Kerala proposed to construct a new dam, a move which is fiercely opposed by Tamil Nadu 'as it would affect the state's interests'.
If this type of incident can occur between neighbouring states of the same country, one can imagine the conflict which can be generated if a similar dispute arises between rival nations.
In the 1995, Ismail Serageldin, then a senior vice president of World Bank had predicted: "The next World War will be over water."
Was this declaration prophetic?