And what about Tibet? 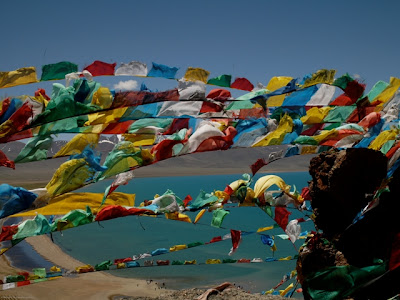 UNESCO was given full Membership to the Palestinians.
But what about the Tibetans?
Don't they have a separate culture? A separate language? A script? A unique religion? A long history with ups and downs?
I remember my old friend Claude Levenson telling me: "We should do something to get Tibet as a Member of UNESCO". I think it was the last time that we met.
What can be done? I don't know.


Canada stops funding for UNESCO over Palestinians
AP
2 Nov, 2011
TORONTO: Canada joined the US on Tuesday in cutting off funding for the U.N. cultural agency UNESCO because it approved a Palestinian bid for full membership.
Foreign Affairs Minister John Baird said Monday's decision by UNESCO is not in the best interests of peace in the Middle East, so Canada is freezing all future voluntary contributions to the agency. Canada contributes about $10 million a year.
``We're just deeply concerned with the decision that UNESCO has taken,'' Baird said. ``This issue should be negotiated between the two parties. It is not in the best interests of peace in the Middle East and we're, you know, tremendously disappointed.''
The United States also has announced it will pull its $60 million in funding from UNESCO, which depends heavily on U.S. funding.
The UNESCO vote was a fallback plan for the Palestinian leadership after its bid for UN recognition as a state and full membership in the global body failed in September. UNESCO is funded by both legally binding and voluntary contributions from member states.
A spending plan for the Foreign Affairs Department tabled in Parliament shows Canada plans to give UNESCO about $12 million a year until 2014 as part of its legally binding obligation. Those payments will continue. UNESCO admitted Palestine as a full member state Monday by a vote of 107 to 14, with 52 abstentions.
Canada and the United States, both staunch allies of Israel, were among the 14 countries in opposition.
Posted by Claude Arpi at 8:20 AM