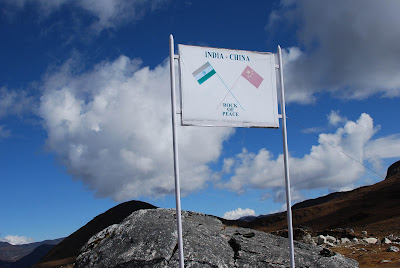 This Xinhua article is important because it is published in the main stream 'official' press.
The hard-hitting commentary probably reflects the view of many in the Party.
Li Hongmei, the analyst says: "In a nutshell, to grow up to be a real power and stand as a sound competitor, India needs to, first and foremost, break through its own psychological fence."
One could, of course, speak of the 'bamboo curtain' in China's mindset: their century-old complex of superiority and their arrogance.
Regarding the 1962 War, Li mentions India's jealousy which: "can sometimes be put in the same breath of inferiority. India could trace its sense of being so self-abased to the brief border war with China in 1960s, when it was beaten by the Chinese army. And India has since eyed China with deep-seated distrust."
Interestingly, early October 1962, as China was planning to attack India Chairman Mao spoke of the possible isolation of China on the world scene, but he did not consider that it was a ‘decisive factor’: “China needn't fear isolation, as long as the front line troops fight well, we will be in an advantageous position. …It's better to die standing, than to die kneeling. If China fought successfully, in an awe-inspiring way, this will guarantee at least thirty years of peace”.
Thirty years of  peace and an inferiority complex, is what the Communist regime believe to have earned from the conflict.
Though the infrastructure may more developed on the Tibetan side of the border, the Indian Army has certainly no inferiority complex vis-a-vis China today.
Indian jawans and officers are a motivated lot, perhaps more than their Chinese counterparts. It has been reported that Chinese soldiers pay bribes in some cases not to be posted on the Indian border. This is not happening on the Indian side.


India's undue worry about China results from inferiority complex
Xinhua
2011-11-24
By Li Hongmei
BEIJING, Nov. 24 (Xinhuanet) -- India jitters at the sight of China gaining prestige in Asia, in particular, in South Asia and Southeast Asia, and takes China's ever-growing regional influence in recent years as a strategic encirclement to target and contain India.
Not a few Indians believe the Chinese have a tradition of favoring encirclement game, as Jaswant Singh, former Indian finance minister, foreign minister, and defense minister, put it in his recent article: Asia's Giants Colliding at Sea?
"China, has wei qui (known in Japan as go), which focuses on strategic encirclement. As Sun Tzu advised many centuries ago, 'Ultimate excellence lies...not in winning every battle, but in defeating the enemy, without ever fighting." Singh wrote in the article.
It sounds nothing more than a loud jealousy, for the simple reason that China has done what India could not, especially when India perceives that China's influence has well reached to its doorsteps and created tremendous impact on those who should have banked on India as imagined.
For India, the sense that a struggle for regional mastery is occurring has become increasingly keen. Chinese activity in Pakistan and Myanmar, the expansion of China's port agreements in the Indian Ocean (the so-called 'string of pearls'), and heightened Chinese naval activity in the Indian Ocean have jangled India's security antennas." said the article.
This also explains why India has been living under the delusion that China lays out a strategic chessboard to lock up and contain India, and thereby every act and every move of China could touch a raw nerve of India.
Jealousy can sometimes be put in the same breath of inferiority. India could trace its sense of being so self-abased to the brief border war with China in 1960s, when it was beaten by the Chinese army. And India has since eyed China with deep-seated distrust. The Indian media are always given to wild speculations on what on earth China intends to do. Any move Dragon takes in the region would in all likelihood vex Elephant.
On this basis, India would be bent on plotting to break through the so-called Chinese encirclement, and Mr. Singh would produce the delusional article conjuring up a picture of two giants colliding at sea.
Perhaps, when Mr. Singh turned out the article, he has yet to comprehend what it is as reality: What China has thus far done is a have-to as a nascent leading power with steady development, but China has already avoided setting foot on a path that many other great powers would follow in their history of growth and rise----invasion and plunder.
Instead, China has sought after a win-win model when it develops economic and trade relations with its neighbors, including India.
Why India appears so impatient to take more agreeable strategies in its periphery is still beyond understanding. But one thing is certain: Today's India, no matter how anxious it intends to lead the region and even the world, is far from potent and prosperous to act of its own accord----By currying favor with China's neighbor, in particular, those who have brewed disputes with China, India would assume, it could instigate these smaller nations to engage in a gang fight against China and contain China's growing clout in the region.
Unfortunately, either India or Mr. Singh seems to have miscalculated the situation: Nowadays, it is no longer those who have only teeth and muscle that can finally loom on the horizon posing as winners, but those who are confident and courageous, and have a strong body with a sound mind, the latter more important for a great power.
India might as well bear in mind: To build up a real power, neither self-satisfaction nor self-inferiority is a mature and constructive mindset.
In actuality, India has already learnt a good lesson in this regard. Its iron-clad suspiciousness of China and shortfall of confidence in opening to others put sand in the wheels of its own progress.
Two months ago, Industrial and Commercial Bank of China, or ICBC - the world's biggest lender by market value, set up business in India, which is the first of four Chinese lenders to start operations in India and was expected to greatly boost investment in India's backward infrastructure sectors and foster the growth of a rupee-yuan market. While in comparison, even more than a decade ago, the same operations started up in Southeast Asian countries bringing an impetus to the local economies and remain as booming even today.
Back in 2006, China and India reopened crossborder trade through the Himalayan Nathu La Pass, 44 years after a brutal frontier war shut down the ancient route. It was expected to give a major boost to bilateral trade between the two countries. But, it turns out to be a picture of contrasts — ambitious tradesmen on the Chinese side vs. slackness of the Indian businessmen.
If India were as courageous as what China has managed to do — daringly reaching out to attract foreign investment and confidently going global, and perhaps, if India could forgo its restrictions on Chinese products and investment, it would progress even faster and would really rival China in the foreseeable future. "No competition, no progress", which is an inbuilt principle in market economy.
If India could carry itself with some ease and confidence, it would not be belittled by others, including China. But if it persisted in its "strategic encirclement" thinking of its giant neighbor, India would virtually step on a loss-making route, at least, in mentality.
In a nutshell, to grow up to be a real power and stand as a sound competitor, India needs to, first and foremost, break through its own psychological fence.
Posted by Claude Arpi at 7:30 AM