One more dam in Tibet 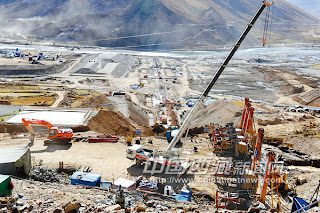 China announces the construction of one more dam in Tibet. This time near the Tibetan capital on the Lhasa river.
It was inaugurated by Zhang Qingli and Jampa Phuntsok, the bosses of Tibet in July 2009.
One report mentions the cost as 700 million yuan while the other says 4.5 billion yuan. A small difference!!

Phomdo hydro project goes well
Nov.18, 2010
China Tibet Online
Currently, the construction of Phomdo project is going on smoothly, according to the project office in Lhasa, capital city of southwest China's Tibet Autonomous Region (TAR). The cut-off wall, reported as the world's highest of its kind, was completed on Oct.12, 2010. 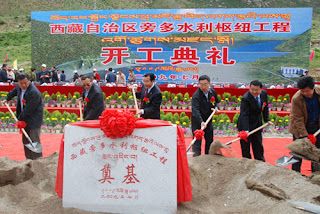 From China Tibet Information Center April 29, 2010
Phomdo dam project as the largest project of Phomdo water control project is expected to start the construction in this May, with the total investment of 700 million yuan.
At present, the Phomdo water control project started in July 15, 2009 is making good progress with the open tender of dam safety monitoring system, highway improvement project carrying on well.
Phomdo water control project as the backbone water reservoir project at the upstream of Lhasa River, has the total reservoir storage capacity of 1.23 billion cubic meters, and 160,000 kilowatts installed capacity. It will play an very important role in developing integrated water resources of Lhasa River, enhance the flood control capacity, and improve the ecological environment in Tibet.