The Diversion of the Brahmaputra: the madness of Guo Kai 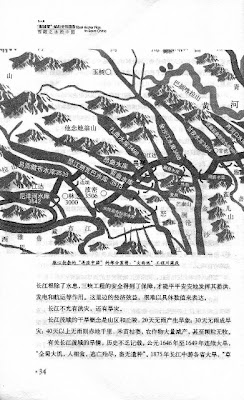 Yesterday the Indian press commented on the official announcement by Beijing that the construction of the Zangmu dam on the Yarlung Tsangpo (Brahmaputra) has started (it was an open secret).
In this context, I am reproducing here an extract of a book written by Jonathan Watts, the correspondent of The Guardian in China, When a Billion Chinese Jump: How China Will Save Mankind - Or Destroy It (2009, Faber & Faber).
The extract relates to the ambitious plan to divert the Brahmaputra to Northern China.
This plan is a brainchild of Guo Kai, a retired Chinese General who worked closely with Li Ling, the author of Tibetan Waters will save China. They proposed to built a Shuotian Canal.

About Li Ling's Book
Back Cover
The purpose of Shuotian Canal (朔天運河) [The name Shuotian comes from the contraction of the origin of the canal near Shuomatan and the city of Tianjing at the end]. is to transport 206 billion m3 of water from Tibet to the north or western north China area where there is drought or a lack of water. At same time, the flood in Yellow river can be eradicated, inland water transport in north China can happen, and the flood in Bangladesh and India will be prevented.

1. Flood
Argument:
Shuotian Canal can solve the root problem of the source of the flood. Guo Kai said the flood in the upper course of Changjiang [Yangtze] happens 15 days a year with the total quantity of 50 billion m3 and if Shuotian Canal is built with 16 dams in the upper course of Changjiang [Yangtze], it can have a reservoir with the capacity of 280 billion m3 and the water can be diverted to the north in the speed of 30 to 40 thousand m3 per second. Thus, Changjiang [Yangtze] river can defend any large scale flood, and then Three Gorges can be safe, whose economic values can hardly be stated.

2. Drought
Argument:
Shuotian Canal can transport the water from Nujiang [Salween] River, Lancang-Mekong River, and Brahmaputra to Changjiang [Yangtze], which make sure Three Gorges can function properly to supply electricity and its transport can be maintained.