Will the Dalai Lama retire? 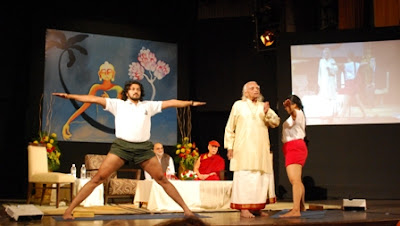 The Dalai Lamas of Tibet have traditionally two hats, a spiritual and a temporal one. Recently the present Dalai Lama, the Fourteenth said that ‘he was contemplating retirement within months’. He however quickly added that the ‘final decision will be taken after consultations with the [Tibetan] political leadership and Parliament-in-exile’.
He later explained "I want to inform them about my intention although I briefly mentioned (about it) already." When requested to give a date, he said: "I do not know; may be next few months." The Indian (and foreign media) immediately titled: “The Dalai Lama to retire soon”.
But retire from which job?
Spiritually, the Dalai Lamas are the incarnation of Avalokitesvara, the Bodhisattva of compassion and Saint-Patron of Tibet. Ages ago, they have taken the vow:


For as long as space endures
And for as long as living beings remain,
Until then may I too abide
To dispel the misery of the world

It is said that the present Dalai Lama still takes this vow every day.
Therefore there will be no spiritual retirement for the Dalai Lama.
As far as the ‘political’ retirement is concerned, the present Dalai Lama has regularly expressed the ‘wish’ to retire.
The main reason for this is that he considers that as a political system democracy is far superior to theocracy. Over the years, he had to struggle against his own fellow countrymen to impose democracy to the Tibetan Diaspora.
As early as 1963, he had stated: "Even prior to my departure from Tibet in March 1959, I had come to the conclusion that in the changing circumstances of the modern world, the system of governance in Tibet must be modified and amended so as to allow the elected representatives of the people to play a more effective role in guiding and shaping the social and economic policies of the State. I also firmly believed that this could only be done through democratic institutions based on social and economic justice."
The democratic system entered gradually into the Tibetan psyche; first with the election of a Parliament-in-exile, then with the direct election of a Kalon Tripa or Prime Minister for the Central Tibetan Administration located in Dharamsala, Himachal Pradesh.
The present Kalon Tripa, the eminent monk-scholar, Prof Samdhong Rinpoche is due to retire early next year and a first round of voting has already taken place. Early 2011, six candidates will fight for the coveted post during a second and final round. The experiment has generated a lot of excitement and hope in the Tibetan community.
The recent declarations of the Dalai Lama have to been seen in this perspective. Having pushed down the throat of the Tibetans the concept of democracy, it is logical that he resigns or at least consult the elected leaders (parliamentarians and the new Kalon Tripa) though they undoubtedly will ask him to continue provide leadership until an acceptable solution is found with the People’s Republic of China on the future status of Tibet.
But there is more.
The Dalai Lama is not only an institution, but also a ‘private’ human being. As such his personal philosophical thought has evolved since 1959.
In the 1980’s, he developed the concept of ‘universal responsibility’ for which he was awarded the Nobel Peace Prize in 1989.
A few years ago, I had a long interview in which he explained his personal vision of his role and the place of Tibet in it.
This explains his so-called resignation.
He had then said: “I have three commitments: promotion of human values, promotion of religious harmony and promotion of awareness of Tibetan cause.”
When asked if there was an order in these commitments, he immediately retorted: “Yes, it is in this order. As a fellow human being, promotion of human values is my first priority; this covers 6 billions of human beings. Then, I am a Buddhist, and as a Buddhist I want to promote religious harmony: it addresses perhaps half of these 6 billions who are religious believers. The third one is about Tibet. There is 6 millions of Tibetans. If you take [in consideration] the Tibetan environment, there are more than 100 millions of human beings dependent on Tibet. North India, Pakistan and Bangladesh depend on rivers flowing from Tibet like the Indus or the Brahmaputra in India; the Mekong in Indochina, the Yellow River or Yangtze in China and many others rivers.
But my three commitments are not separate, there are interlinked. He rightly pointed out: “the Tibet issue is also connected with human values.”
Elaborated further, he commented: “Out of three commitments, number one and two are mostly on volunteer basis. Till my death I committed myself to these causes. Regarding the third one [Tibet], in a way it not a voluntary commitment;it is due to past history and the [existence of] the Dalai Lama institution. I am bound to this commitment and this responsibility, because I am the Dalai Lama who played a role in past history of Tibet. More importantly, Tibetans inside and outside Tibet put their total trust in me. That is why I have the moral responsibility to serve them as much as I can. In the meantime, the Tibetan cause is the cause of a nation, this struggle should continue from generation to generation. My life represent only one generation. It is therefore very important, for the people themselves take more responsibilities.”
He continued by saying that he was deliberately promoting democracy: “I truly believe in this concept: for the past 46 years [it was in 2006], we are fully committed to the democratization of the Tibetan society. Our biggest achievement is to have now an elected leader, the Kalon Tripa. Since the last elections, I consider my position as of a semi-retirement. If we return to Tibet with a certain degree of freedom, then I will fully resign. Therefore, my third commitment has some limitation. But even in my complete retirement, I will continue with the promotion of human values and promotion of religious harmony.”
He ended as usual by a joke: “My retirement will not be through voting [democratic], it is my individual human right”
He could not stop laughing. He was quite happy at his own joke.
Before the end of the interview, he became serious again: “In fact, if I had the full responsibility and that one day I die, then there would be total chaos. This [democratic] process started 20 years ago and I often tell the Tibetans officials: ‘You should carry full responsibility as if there was no Dalai Lama”. He also explained to his people: “for the work you can do, you should take full responsibility.”
Another argument is if the Tibetan people take their responsibility, “that way I will have more energy and time to do some other work that you cannot do”.
What is the other work that others cannot do?
One example can be given: last week in Delhi, the Dalai Lama initiated a dialogue between science and spirituality. 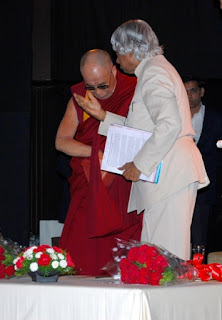 The Mind Science Conference was organized by the Mind Life Institute from the United States and the Foundation of Universal Responsibility based in Delhi; The National Institute of Advanced Studies, Bangalore, and the Central Tibetan University, Sarnath also participated. The entire exercise was the brain child of the Dalai Lama who has been meeting reputed scientists for the past 25 years to see if meditative practices can be corroborated by modern science.
The main theme was ‘the emerging field of Contemplative Science which can investigate the effects of contemplative practice on human biology and behaviour’.
Apart from world famous scientists, former President APJ Abdul Kalam and renowned yogi B. K. S. Iyengar provided valuable inputs.
It was a great privilege for this writer to listen to eminent scientists, monks, scholars and yogis dreaming of a confluence of science and spirituality.
At one point the Dalai Lama said that traditionally the Buddhist have taken three refuges, in the Buddha, the Dharma and the Sangha; he suggested that the time had perhaps come to add one, Science. For him, if a religious belief contradicts modern science, it should be discarded.
Only the Dalai Lama has today the moral authority to initiate such a fascinating and futuristic process.
In the meantime, the people of Tibet through their elected representatives will certainly ask him to continue to guide their destiny for the years to come.
Posted by Claude Arpi at 5:20 PM