Could they attack India soon? 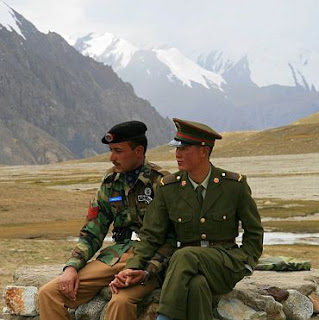 Mulayam Singh says that China 'could' attack India 'soon', it is probably true that they 'could', but why 'should' they?
The top leadership is too busy jockeying for the top slots in the Politburo and the Central Military Commission to be 'decided' by the end of 2012.
Another issue is that there is no leader in China today who has the authority to decide to go to war against India.
But yes, they 'could'.
Infrastructure is ready. On the day Mulayam was making his declaration in the Lok Sabha, Xinhua reported that "Promotions for off-season travel helped drive up visitor numbers to southwest China's Tibet Autonomous Region in the first 10 months by 20.8 percent over the same period last year. ...While the majority of the 6.37 million tourists were Chinese, the 'roof of the world' also received about 204,000 foreign tourists from January to October, up 34.1 percent year on year. ...The region's tourism income grew 45.1 percent year on year to 6.45 billion yuan (966 million U.S. dollars)."
Wang Songping, Tibet's deputy chief of tourism explained that the growth in tourist arrivals was due to local government efforts to promote tourism in the fall and winter: "These included sponsoring a series of Tibetan culture activities, and cutting hotel rates and ticket prices to major tourist destinations", said Wang.
In other words, tourism is subsidized.
It is one way to see this development. It can also be argued that the infrastructure used to bring millions of tourists can very well be used to bring troops to the border. In that case, the subsidy becomes a hidden defence budget (more than one million of tourist will visit the border prefecture of Nyingchi).
On the other side of the McMahon line, the Government of India still believes in an antediluvian Inner Line Permit system.
What to say? The Chinese certainly 'could', but is it their interest to do anything against India right now? It is doubtful.
The main players still have to place their pawns before Fall 2012.

China may attack India 'soon', Mulayam warns in LS
Hindustan Times
November 9, 2012
Former Defence Minister Mulayam Singh Yadav on Tuesday claimed that China could attack India 'soon' and the threat needed to be taken seriously against the backdrop of the 1962 invasion.
"China is laying claim on several of our states including Arunachal Pradesh, Himachal Pradesh and Uttarkhand besides Ladakh region....It is going to attack us soon...The attack can take place any time", the Samajwadi party supremo said in the Lok Sabha during Zero Hour.
JD(U) chief Sharad Yadav supported the contention of Yadav while SP member Ramkishun felt China is a threat as it eyes Indian market.
The SP chief wanted Parliament to immediately discuss the issue threadbare in view of the threat.
He had unsuccessfully tried to raise the issue as soon as the House met for the day.
While Parliamentary Affairs Minister Pawan Kumar Bansal said he would draw the attention of the defence minister to Yadav's statement, finance minister Pranab Mukherjee said, "We will discuss this issue."
The SP chief said when he was defence minister, roads had been laid on the borders with China which have now turned bad. As against this, China has built four to eight lane roads on its side of the border. Yadav claimed that the Army top brass has been warning the government over the Chinese threat.
His statement came close on the heels of Army chief Gen V K Singh's remarks that India was "not sure" of China's intentions for developing infrastructure along the borders. At the same time, the General had said that a repeat of the 1962 aggression was 'never' possible.
"China is doing a great amount of infrastructure development, which it says is for locals of the area. No bones about it, no crib about it. But our problem is we are not very sure about the intentions. And when intentions change, with this capability, things can go wrong. And that is what is a matter of concern," the Army chief had said.
file:///C:/Program%20Files/Courier%20Email/HtmlDocs/CCAL3E8CE400.HTM http://www.hindustantimes.com/StoryPage/Print/623870.aspx
Posted by Claude Arpi at 6:56 AM