The most reliable messenger, the pigeons 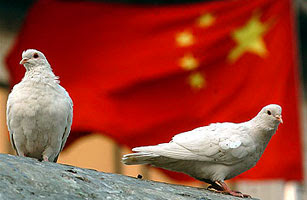 Ritu Sharma's article in The New Indian Express raises a very serious problem: the lack of proper infrastructure along India's border with China.
In 2007, I had written on this issue: "Another fact demonstrates the way the Chinese function: When you make an ISD call from Tawang, the person who receives the call at the other end can see Lhasa's code, and not India's (91), followed by the STD code of the Tawang district as the caller ID. Is the Government even aware of this blatant violation of India's sovereignty? Beijing clearly knows where its interests lie."
And India does not know.
In 2008, I had asked Kiren Rijiju, then MP from Arunachal about this. He explained: "It happens not only in Tawang, but also on the Bangladesh border, in Meghalaya. There you use the Bangladesh network, since BSNL is not there. The problem is that there are too many restrictions in India. It is what I call negative policies not to develop border areas. So there are no roads, no mobile phones, no televisions, no infrastructure. This is the mindset of our country."
All those living in border areas know that it is not only true for telecom towers, but for TV broadcast also.
But there is perhaps a solution.
A Member of the French Parliament recently suggested to boost the use of military pigeons for the French Army.
In a written question, Jean-Pierre Decool, a MP from the UMP majority (from Northern France) asked for the return of the military pigeon as a weapon.
He forcefully spoke of "the usefulness of the pigeon in the event of armed conflict. In 2011, the Chinese army has decided to 'recruit' some 10,000 pigeons, in addition to the existing 200. Indeed, if during an armed conflict, a generalized failure of communication networks may occur. Consequently, the pigeon will remain one of the only communication tools capable of transporting messages," Decool said in the Parliament.
In his response, the French Minister of Defence stated: "historically, the pigeon presented a certain interest for military communications. Safe and reliable, it has often helped to get rid of the insecurity of the other lines of communication. The French Army has the last pigeon dovecote in Europe on the site of Mont-Valerian, near Paris. In addition, France has identified nearly 20,000 pigeon lovers, who could provide valuable assistance in case of strong 'weakening' of telecommunication networks."
At Mont Valerian, the 8th Signal Regiment has kept the tradition of maintaining a military national dovecote.
Regarding China, a year ago, the Time Magazine spoke of "China's Most Secret Weapon: The Messenger Pigeon". The reporters asserted:


Though the world's attention has recently been focused on the unveiling of China's first ever stealth fighter jet, the Chinese military has been busy investing in another type of furtive flyer: the humble messenger pigeon. According to reports in state media, late last year, the Chengdu division of the People's Liberation Army (PLA) began training 10,000 pigeons as part of a push to build a 'reserve pigeon army' that would provide support to the military's conventional communications infrastructure in the event that war rendered its plethora of modern technology unusable.

"These military pigeons will be primarily called upon to conduct special military missions between troops stationed at our land borders or ocean borders," air force military expert Chen Hong told China Central Television after the announcement. According to reports, the birds will be dispersed to communications bases across China's remote and mountainous southwestern region, particularly around the Himalayan foothills. The pigeons, flying at speeds of up to 75 miles (120 km) per hour, will be trained to carry loads of up to 3.5 oz. (100 g). (See the top 10 militant animals.)

China has the telecom towers plus the pigeons. What about India?
Will someone suggest to Mr. A.K. Antony to use some of these gentle birds, at least for the jawans to communicate with their family at Nathula, Demchok or Bumla.

The Indian jawan and the great calls from China
New Indian Express
Ritu Sharma
NEW DELHI
26th Aug 2012
Chinese mobile towers along the Indo-China border are burning holes into the pockets of Indian soldiers deployed at forward bases.
Most of the time, when Indian armymen posted at Nathu La in Sikkim dial home, the Chinese mobile towers pick up the signals, therefore turning them into international calls on roaming.
Strangely, there are no mobile towers of Indian cell phone providers along the border, though soldiers use their cell phones very frequently.
“It is a peculiar situation.
Whenever we try calling home from Nathu La, our cell phones catch signals from the nearby Chinese towers.
Many times we end up paying up to `130 for one call,” said a soldier ruing about the problem.
Earlier this year, the Parliamentary Standing Committee on Defence had brought to light the poor connectivity issue and said that jawans posted at Nathu La were even forced to borrow handsets from their Chinese counterparts on the other side of the fence to stay in touch with their families.
Even as the Indian soldiers’ attitude in this treacherous terrain is painted on the mountains with declarations like “Hum hi Jitenge! (Only we will win)”, what seems to be failing them is the lack of infrastructure development including the absence of telecom structures in the area, which was once part of the Silk Route.
The government has been aware of the problem in telecom connectivity but there has been no development on this front.
Most private telecom players are concentrated in Sikkim’s capital Gangtok and nearby areas.
The public sector BSNL, which is the major service provider near Nathu La, has not been able to install towers and telephone exchanges in the region.
“Satellite phones are available with the units but their numbers are not proportionate with the strength of the troops,” an army official said.
This has also created a piquant security situation since the phone calls of soldiers can be easily monitored by the Chinese.
At Nathu La, only a stretch of dilapidated concertina wire serves as the line of demarcation between the two countries who fought a brief but bloody war in 1962.
On September 7, 1967, Chinese troops had opened fire on Indian troops at Nathu La as they were putting up the wires, leading to a six-day border conflict.
Posted by Claude Arpi