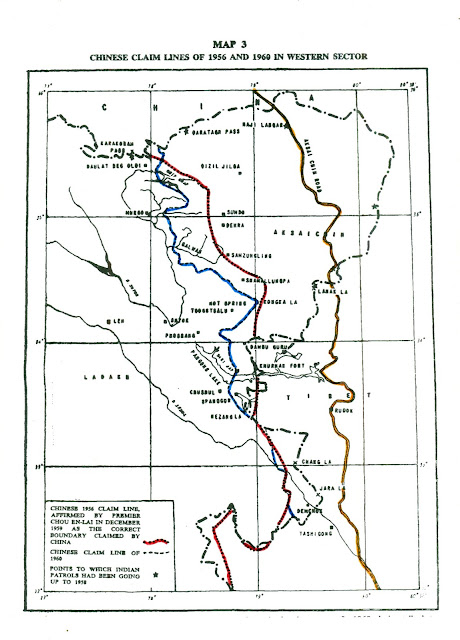 The border dispute with China since May 2020 seems to be a repeat of the episode which took place in the 1950s. The then Indian leadership made a mistake by keeping it away from the public and the media. What remains to be seen now is whether Delhi has learnt its lesson and will do better this time.

One of the greatest tragedies of post-Independence India is having let China occupy the Aksai Chin plateau and with barely any protest. The nation still suffers the consequences of this blunder today in Ladakh.

The fact that China occupied this part of north Ladakh and built a road on Indian territory was known to the Indian leadership as early as 1952, when the first surveys were conducted by the People’s Liberation Army (PLA). The Chinese started to build the road sometime in 1954, but the issue only came up for discussion between Jawaharlal Nehru and Zhou Enlai, the Chinese Premier, in September 1959, more than two years after the road was inaugurated.

A year earlier, on 18 October 1958, Foreign Secretary Subimal Dutt had sent a feeble protest to Beijing: “It had come to the Government of India’s [GoI] notice that a road had been constructed by the PRC [People’s Republic of China] across the eastern part of the Ladakh region of the J&K State, which is part of India.” The note continued: “It is a matter of surprise and regret that the Chinese Govt should have constructed a road through indisputably Indian territory without first obtaining the permission of the GoI and without even informing the Government of India.” The note sounded more as an encouragement to go ahead than anything else.

In September 1959, the Prime Minister, who knew that the Chinese had built the road, explained India’s rationale to his Chinese counterpart: “We did not release to the public the information which we had about the various border intrusions into our territory by Chinese personnel since 1954, the construction of a road across Indian territory in Ladakh, and the arrest of our personnel in the Aksai Chin area in 1958 and their detention. We did not give publicity to this in the hope that peaceful solutions of the disputes could be found by agreement by the two countries without public excitement on both sides.”

Delhi did not want ‘to make things worse’, probably fearing a violent reaction from Beijing, but what can be worse than the 1,00,000 troops facing each other now, in the harsh winter of Ladakh. One can’t rewrite history but we can learn from it: Had the Indian public and media known about the road in 1953-54, India might not have been facing China in Ladakh today!

However, is the mindset of today’s babus different from what it was in the 1950s and 1960s? Undoubtedly, it is more difficult to keep such secrets today, but the babus’ modus operandi and motto remain the same: Keep everything secret. They probably feel that they derive their power from the fact that they control the information, forgetting that silence and secrecy have often, as in the case of the Aksai Chin, endangered the interests of the nation.

I am particularly thinking of the fact that since the beginning of the India-China Special Representatives’ process in 2003, the public has never been informed that the Line of Actual Control (LAC) was a myth and that there were actually two Lines of Perception, and that anything could happen in between. Why was the Indian public not informed that the Chinese had refused to provide maps of their ‘perceptions’?

Beijing has no scruples in changing the posts, whenever it is convenient. The correspondence between Nehru and Zhou Enlai for the period between September and December 1959 brings some light on the treacherous intentions of the Chinese in Ladakh today. On 8 September 1959, Zhou Enlai wrote to his Indian counterpart: “I find from your letter that there is a fundamental difference between the positions of our two Governments on the Sino-Indian boundary question.” Two weeks later, Nehru replied that he was ‘greatly surprised and distressed’ to be told that there was a dispute on the border: “[in January 1959], I had no idea that the People›s Republic of China would lay claim to about 40,000 square miles of what in our view has been indisputably Indian territory.”

It is true that no Chinese had ever set foot in the area in the early 1950s. It is unfortunate that today, Beijing continues to change, despite speeches of the New Helmsman, Xi Jinping, about a community of “shared future for mankind”.

In September 1959, Zhou explained: “The Punjab Western Himalaya and Adjoining Parts of Tibet compiled by British John Walker by order of the Court of Directors of East India Company (published in 1854) corresponded fairly close to the Chinese maps.” This line, though not acceptable by India, was mid-way between the present Chinese claims and India’s traditional boundary, coinciding with the Kunlun watershed.

On 21 October 1959 a serious incident took place within Indian territory, south of the Kongka Pass and 10 CRPF personnel were killed—that was a turning point.

With the situation fast deteriorating on the border, on 7 November, Zhou offered that each party should withdraw 20 km from where they were: “to ensure the tranquillity of the border regions and to create a favourable atmosphere for a friendly settlement of the boundary question.” Less than two weeks later, Nehru replied: “Unfortunately, we do not yet know with any precision where the frontier line lies according to the claims of the Chinese Government. This is a matter for surmise based on small scale maps published in China. These maps themselves have not always been consistent, and different lines are sometimes indicated in them.” China would refuse to exchange maps and kept publishing maps with different alignments, though the lines kept moving more and more inside India’s territory.

On 16 November, the Prime Minister suggested the Indian troops withdraw “all personnel to the west of the line which the Chinese Government has shown as the international boundary in their 1956 maps which, so far as we are aware are their latest maps.” At the same time the Chinese troops should return north of the Aksai Chin. This was obviously not acceptable for Beijing who wanted to continue using the newly-built road. Zhou replied the next day: “The line up to which each side exercises actual control in this sector is very clear… As a matter of fact, the Chinese map published in 1956, to which Your Excellency referred, correctly shows the traditional boundary between the two countries in this sector;” clearly confirming that China stood by the 1956 Line, faraway from Beijing’s claims in the area today. A few weeks later, China advanced further its line, engulfing large parts of India’s territory.

The situation since May 2020 seems to be a repeat of the Chinese advances in 1959. The question which remains here is: Has India learnt its lesson? Let us hope that it has.