On November 3, 2006, I wrote this piece on Maj Som Nath Sharma, PVC for Rediff.com
It was entitled The soldier who won India's first Param Vir Chakra.
On the anniversary of Maj Sharma's death, I republish the article 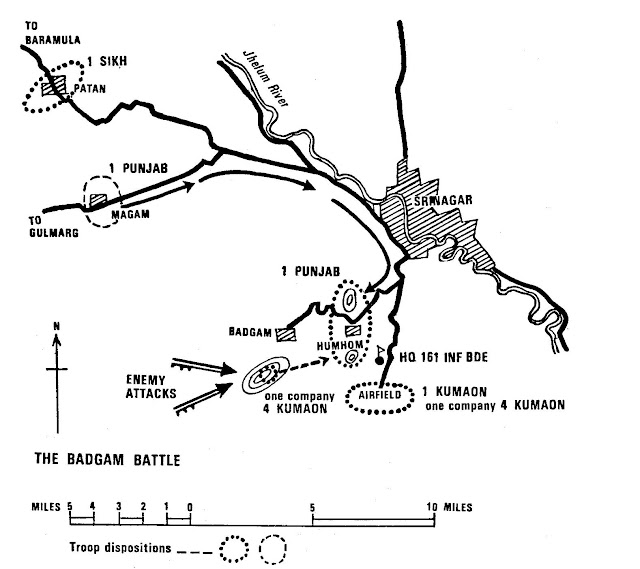 The next morning Som Nath Sharma landed in Srinagar (where he met S.K. Sinha). The situation was fast deteriorating.
Two days later on November 3, the 'raiders' reached Badgam a few miles away from the Srinagar airfield. Brigadier 'Bogey' Sen, the commander in Srinagar, immediately dispatched Sharma and his company to Badgam.
At 2:30 pm, supported by 3-inch and 2-inch mortars, a 700-strong tribal force attacked the Indian jawans. Being outnumbered by 7 to 1, Sharma immediately sent a request to Brigadier Sen for reinforcements.
He knew that if the enemy advanced any further, the airport would be lost and Kashmir would become a province of Pakistan; the airfield was the only lifeline between the Valley and the rest of India.
His last wireless message to the headquarters stated: 'The enemy are only 50 yards from us. We are heavily outnumbered. We are under devastating fire. I shall not withdraw an inch but will fight to the last man and the last round.'
Soon after, Som Nath Sharma was killed by a mortar.
By the evening, when reinforcement reached Badgam; it was too late. The Kumaonis had suffered over 50 per cent casualties though they had inflicted much heavier losses to the 'raiders' who lost 200 men and the airport and Kashmir.
Major Som Nath Sharma was awarded the first Param Vir Chakra, the highest Indian gallantry award (the Indian equivalent of the Victoria Cross).
The citation read: 'Keeping his nerve, he skillfully directed the fire of his section into the ever-advancing enemy. He repeatedly exposed himself to the full fury of enemy fire and laid out cloth airstrips to guide our aircraft onto their targets in full view of the enemy. His leadership, gallantry and tenacious defence were such that his men were inspired to fight the enemy outnumbering them. Major Sharma set an example of courage and qualities seldom equaled in the history of the Indian Army.'
Three days later, Sharma's body was recovered. Though mutilated beyond recognition, a few pages of the Gita that he always kept in his breast pocket and the empty leather holster of Tewari's pistol helped to identify the body. The pistol was gone.
During the last chat with his friend before flying to Kashmir, Som Nath had joked that either he would die and win the Victoria Cross or become the army chief. It is his younger brother V.N. Sharma who in 1988 became chief of army staff.
Today, the world has gone topsy-turvy: true heroes are forgotten and terrorists become martyrs.
Posted by Claude Arpi at 11:00 AM

I salute true son of mother india...however, after 70 years of rule, congress has managed to pseudo secularise this great country of sages where their own martyrs are ignored and terrorists, extremists are sympathised...Only secularists of congress creed can answer this as to what they think it will take us...

Very well penned narration of this braveheart and his valour.