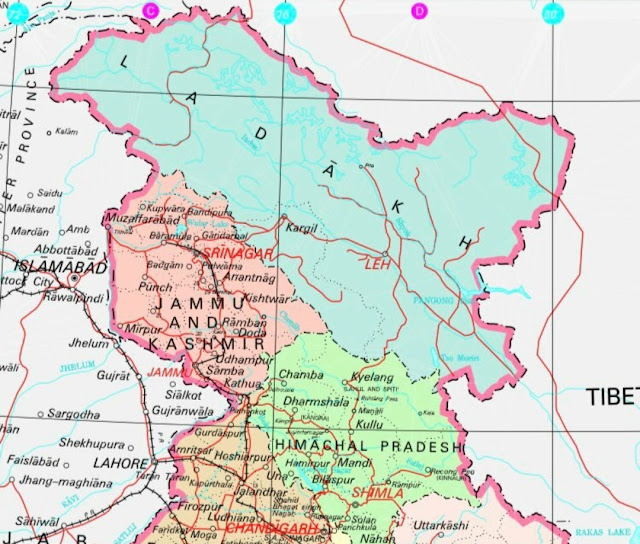 The Indian Government has asked US social media giant Twitter to explain within five working days why it showed Leh as part of Jammu and Kashmir instead of a separate Union Territory.
In case Twitter’s answer is not ‘satisfactory’, the government will proceed further: “we can block access to Twitter under the Information Technology Act, and a police case can be filed with up to six-month imprisonment,” said a government source.
In a notice to the micro-blogging platform owned by Jack Dorsey, the government said that they viewed the matter as “a deliberate attempt by Twitter to undermine the will of sovereign Parliament of India”, which had declared Ladakh as a Union Territory of India with its headquarters in Leh.
A Twitter spokesperson was vague, "Twitter remains committed to partnering with government of India and Ministry of Electronics and IT to serve the public conversation. Duly responded to the letter and as part of our correspondence, shared a comprehensive update with latest developments regarding geo-tag issue."
Earlier, Twitter had also shown Leh as part of China, after which the secretary of the Electronics and Information Technology Ministry had written to Jack Dorsey. In response, Twitter had made changes though it has not yet corrected the map to show Leh under the Union Territory of Ladakh; Leh still appears as part of Jammu and Kashmir.
For unknown reasons, the government has remained silent on Google maps showing Arunachal Pradesh as part of Shannan Prefecture of the Tibet Autonomous Region.
Why was no action taken?
Both the US firms should be punished according to the laws, if they refused to show properly the Indian territory.

It is not new, the United States have  published maps wrongly depicting the borders of India in the past.
For example, a "Projection of the International Map of the World" in 1950 shows Demchok in Ladakh as Tibetan territory and not Ladakhi.
Another map of "Tactical Pilotage Chart" published by the Director, Defence Mapping Agency in the US (Fairfax, Virginia) in 1995, also shows the entire Ladakh range (and Demchok) in Tibet.

At the same time, maps of Tibet published by historian Tseton Shakabpa and former British diplomat HE Richardson show correctly the Kailash range south of Fukshe, being the frontier between India and Tibet (and not the Ladakh range).
It is particularly important at a time rumours are floating around that the government is ready to compromise and vacate the heights on the Kailash Range, South of the Pangong lake.
The 1960 Chinese claim line (some authors call it 1959 Line), does not follow any geographic or historical (customary or administrative) principles. It suddenly cut across from the Kailash to the Ladakh range without any basis (perhaps because the Chinese had never visited the area before 1962).
It is obviously regrettable that the US have mapped the area without any knowledge of the historical background or even consulting the Government of India.
Unless the Indian Government strictly deals with Twitter and Google, the farce will continue.

Incidentally, there was no dispute between Ladakh (J&K) and Tibet in this area.
Richardson in his Précis mentioned the only disputed place which is Drokpo Karpo, north of Pangong tso.

The Boundary
The area under dispute [Drokpo Karpo] is high, uninhabited, grazing land. It appears that the boundary, as in most grazing countries, had never been fixed. The claims of both sides, which neither would relax, are shown on the accompanying sketch map. No decision was possible. The Government of India did not think that the Kashmir Durbar's claim was likely to succeed, and suggested a graceful concession, but the Durbar declined.
In 1929, the government of India decided that the matter, which was of no real practical importance should be allowed to drop, and this hope has so far been fulfilled, although the Tibetan Government did touch on the question in 1937.

The issue was not solved at the time of Independence.
Anyhow, the Kailash range was clearly the border between Ladakh and Tibet in the South and Demchok was the last Ladakhi village, while Tashigang was the first Tibetan one.