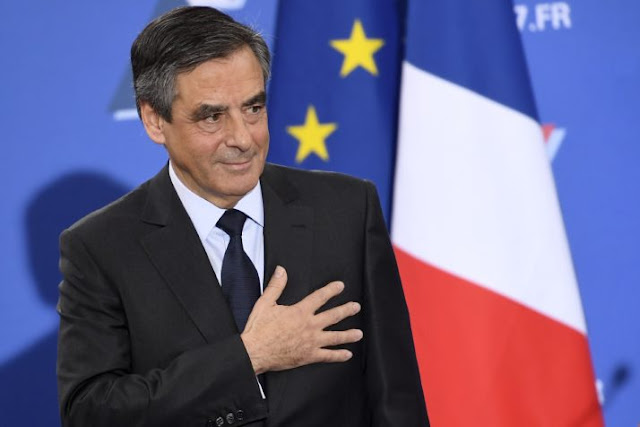 I had written this before the televised announcement by President Hollande that he will not stand for next year Presidential Election.
His withdrawal does not change much the analysis.

The French are known for their revolutionary spirit. One could have expected a lots of patakas during the Primaries of the Republican Party (Les Républicains), knowing that the winner of the contest will have good chances to win the Presidential elections next April.
After having watched for months the ugliness of the US Presidential campaign, it was a bit of a surprise (and comfort) to see that the seven candidates engaged in the first round kept a rather decent attitude.
Not only did the main contenders: Nicolas Sarkozy, the energetic former president, Alain Juppé, the mayor of Bordeaux and François Fillon, who served as prime minister under Sarkozy, discuss their respective programs of how to take France out of the current depressing slump, in a composed way, but there was hardly any viciousness in the debate.
However, this time again, like during the US election or the Brexit vote, the surveys went completely wrong. They had predicted an easy victory for Juppé, with Sarkozy closely coming second.
But on the ‘E’ Day of the first round, Fillon, who had been catching up in the last leg of the campaign, won with a hefty margin against Juppé.
The former PM won 44 % of the votes, while Juppé obtained 28 %. Sarkozy came third with 20 %, while the four other candidates finished with less than 3 percent (the only lady, Nathalie Kosciusko-Morizet, coming 4th with 2.6 %).
Sarkozy immediately accepted the verdict. It is probably the end to his political career. Voters were certainly ‘tired’ of Sarkozy’s ‘hyper’ style of functioning and his harsh words for those who did not agree with him (he once told someone who refused to shake hands with him, “get out of my way, poor asshole”).
While millions of voters apprehend the extreme right of Marine Le Pen, (who was not part of the Republicans primary), during the first round, the ‘anything but Sarkozy’ was prevalent: the former President is under several investigations, including over allegations of receiving funds from former Libyan dictator Muammar Gaddafi for his 2007 presidential campaign.
As he was leaving the political scene, Sarkozy advised his supporters to vote for Fillon in the second round: “[he] seems to have understood best the challenges that France faces."
Thereafter, the second round was a formality for Fillon who gathered 67% of the votes to be the presidential candidate for Les Républicains.
He is now the great favorite for the ‘real thing’ in April next year. With his radical rightist, though softer program, he will appeal to a larger electorate and probably defeat Marine Le Pen.
President François Hollande’s Socialist Party is in total disarray and divided over who should run for the 2017 elections. Hollande has beaten all the records of unpopularity (only 4% of the French approve his policies). It is mainly due to his lack of charisma and some blatant mistakes; for example things that a president should not do: riding on a bike behind his bodyguard to visit his girl friend or confiding State secrets to journalists for a book. Though he does not want to quit, Hollande is considered a definite looser.
To compound the President’s problems, his Prime Minister Manuel Valls is a likely candidate to the Socialist primary, while Emmanuel Macron, a close protegé of Hollande not long ago, has already announced that he will be a candidate for the top job.
The 38-year-old former Economy Minister (who worked as an investment banker for Rothschild) believes that he has witnessed the ‘emptiness’ of France’s political system; he wants now to ‘bring optimism’ to the country. Today, Macron’s party ‘En Marche!’ (‘On the Move!) directly challenges Hollande’s candidature.
The Time wrote: “In his position as Economy Minister, which he resigned from in August, Macron becomes an unlikely champion to many ‘outsiders’, like youth, immigrants and minorities.”
However, he is considered by others part of the ‘establishment’ due to his banker’s past. His candidature has certainly created further confusion in the left.
After winning first round with a large margin, Fillon declared: “My project will trigger a new hope," adding: "everywhere my fellow citizens told me they wanted change, authority and being respected."
These three points may take him to Elysée Palace a few months from now.
What really differentiates him from his opponents (Juppé and Hollande in particular), are his views on Russia.
During Hollande’s presidency, the Russian President has been made a demon. Fillon asserted that it was "ridiculous to portray Putin as a monster with hands full of blood". The presidential candidate also called for an end of EU sanctions against Russia as he sees Putin as an ‘indispensable ally’ against the Islamic State (IS) in Syria, advocating that France should support Bashar al-Assad against IS while helping the Syrian Christians.
Hollande’s anti-Putin campaign had taken such proportions that two Mistral-class helicopter carriers, which had been ordered (and paid for) by Moscow were never delivered to the Russian Navy. The deal had been signed in January 2011 by …Alain Juppé, then Defence Minister.
Hollande decided to refund Moscow and eventually, the two Mistrals were resold to Egypt (did Saudi Arabia paid the bill?). The latest gossip is that Egypt will sell them back to Moscow because the ships were fitted to Russian specifications. What an irony it would be.
After the second round, Fillon told his electors: "I will take up an unusual challenge for France, to tell the truth and completely change its software."
He will probably succeed to become the next French President; to change the software may not be so easy.
Posted by Claude Arpi at 6:36 AM