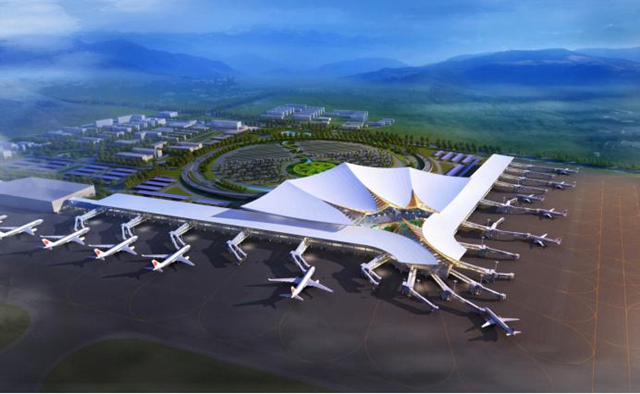 Recently, the design of Terminal 3 of the Lhasa Gongkar has been made public.

It is said that the design was inspired by “traditional Tibetan culture in the pursuit of  the heart of the sun and the moon - the eternal Shambhala".
What does this mean? Is not clear.
China Tibet Net added that this project will “not only meet its functional purpose, but also perfectly combine architectural style and regional culture".
I leave it to the readers to decide if the culture of Tibet is represented in the model.

Importance of Gongkar Airport
On July 1, China Military Online had reported that new steps had been taken to “help PLA Air Force (PLAAF) cope with emergencies.”
A joint meeting on the development of military-civilian integration of dual-use airports of the PLAAF had been held in Beijing on June 17.
On the agenda was the "Interim Provisions of Operation Security at Dual-use Airports of the PLA Air Force." The PLA website said that it is based on win-win principles for both the military and civilian sides.
The new arrangement, to integrate the development of military-civilian airport resources between the PLAAF and civil aviation is being implemented, noted the website, which further explained: “Its main purpose was to establish a complementary management mechanism with smooth coordination and shared resources to gradually form a support capability that guarantees flight safety at peace times and meets combat needs at wartimes.”
Beijing believed that “two [first] airports [Lhasa and Sunan Shuofang] are good examples of dual-use airports.”

Why Lhasa Gonggar Airport?
As it provided “important support for Tibet's economic development and national security in China’s Southwestern region.”
Lhasa Airport has always been the hub to ‘defend' China’s borders …against India.
China Military Online remarks: “On the one hand, as an important force in Tibet’s transportation, the airport has made great contributions to Tibet's economic construction. It has safely transported more than six million passengers in total since it was put into use. The cargo throughput also surpassed 140,000 tons.”
It adds: “On the other hand, the airport is an important channel to transport the PLA's new recruits and strategic materials to Tibet. The airport is also a major ‘airborne bridgehead’ in Southwest China.”

Today, Xinhua announced that the number of passengers 'handled' by Lhasa Gonggar Airport will exceed 3 million in 2016: "it shows the rapid development of its civil aviation industry," says the agency.
For the first time in 2006, the Lhasa airport saw the number of passengers crossed 1 million and in 2013, it reached 2 million.
A senior regional civil aviation official told Xinhua: "The rapid growth in passenger numbers at Lhasa airport shows people's confidence in Tibet's social stability, and is a symbol of the rapid economic development of Tibet."
For the Chinese authorities, the so-called stability of the plateau is clearly linked to the number of passengers using the 71 routes from the Mainland to Lhasa.

Incidentally,  on November 25, China Daily announced that more than 20 new highways will be built in the TAR in 2017 (with a total investment of more than 33 billion yuan or 5 billion US dollar).
Among them, a highway between Lhasa and Shigatse Airport and the one between Gongkar Airport to Tsethang.
Posted by Claude Arpi at 2:34 PM