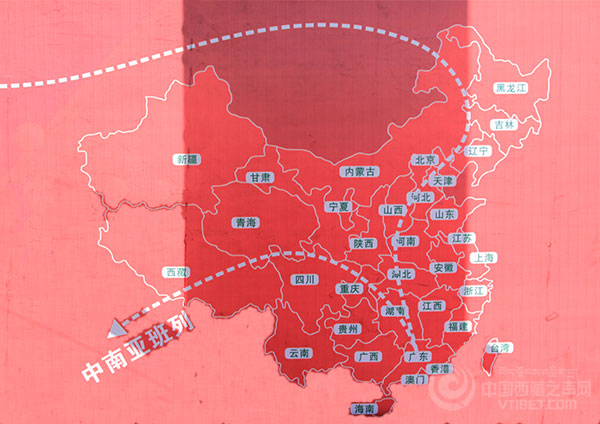 I have already mentioned in this blog that during the coming year, the Tibetan Autonomous Region's government is planning to construct more than 20 new highways (included new routes from Lhasa to Nagchu; Dege to Chamdo; Chamdo to Jaka; Lhasa to Shigatse Airport; and Gongkar Airport to Tsethang) with a total investment of more than US$ 5 billion.
More information has now come out. 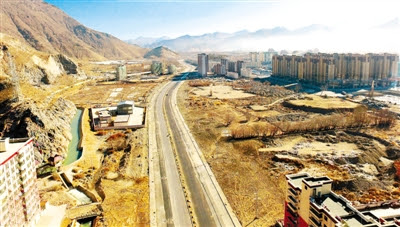 Loop-line around Lhasa City
A 73-kilometers 'loop-line' around Lhasa is under construction. Some 4.9 billion yuan has been spent so far on the project and the basic work is completed.
According to China Tibet News, the loop-line is expected to be finished by the end of this year. The website says that the project “is meaningful to perfect city traffic network, drive the exploitation and utilization of land around, and reserve space for the urban development in the future.”
It is probably necessary to receive 25 million tourists.

Lhasa Nyingchi (Nyingtri) railway line
The Lhasa Railway Office has announced that the main engineering work for the Lhasa section of the Lhasa-Nyingchi Railway has been completed. Next year, the beam-laying  will start on this section.
The total length of Lhasa-Nyingchi Railway will be 430 kilometers; it is designed for a speed of 160 kilometers an hour. It will have 9 stations including Gongkar, Chanang, Tsetang, Sangri, Gyaca (Drumpa), Nang County, Minling, Chaoyang and Nyingchi.
Started in 2014 it should be completed in 2021.
One difficult section is the tunnel under the Galai mountain; it will opened in 2017. With a total length of 4,373 meters, the tunnel is “one of the controlling projects of Lhasa-Nyingchi Railway. At present, most half of the project has been excavated and it is expected to be completed in the next year. Adopting ballastless track laying skill, passengers can feel more stable and comfortable in the process of driving,” says the website.
Some 700 workers are employed on the line. Part of the work is sub-contracted to transportation, labour service and equipment leasing companies.
The Chinese website explains: “This project plays an important role in promoting economic coordinated development of eastern and western areas, perfecting regional railway network layout, connecting Yangtze River Economic Zone and Sichuan-Chongqing Economic Circle, promoting the opening up of Sichuan Province and Tibet Autonomous Region, accelerating the development of Shangri-La ecotourism area [in Yunnan], improving investment environment, promoting economic development and new township construction, improving people's living standard, and speeding up the poverty alleviation work.”
Clearly, the intention of the Chinese government is to link their different ‘corridors’, till one day they reach the most important one, the China Pakistan Economic Corridor (CPEC). In the meantime, the work is progressing fast in the TAR, Sichuan and Yunnan Provinces.
Regarding the Lhasa-Nyingchi railway line, defense is not mentioned but is certainly one of the most important factors as the terminus will be near the Indian border of Arunachal Pradesh. 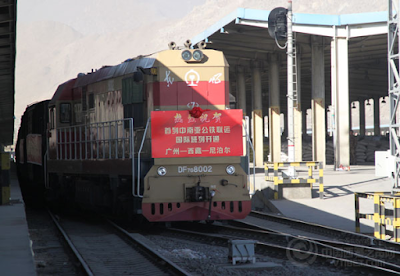 The Train to Nepal
No mention is made of the present stage of construction of the Shigatse-Kyirong railway line, though on December 5, Chinese news agencies reported that the first Guangzhou-Tibet-Nepal 'block train' reached the freight terminal of Lhasa Railway Station …on his way to Nepal.
One site, VTIBET.com wrote: “It was said that it is the first time that road-rail intermodal transport is used in the Tibet Autonomous Region. The modern transportation mode has effectively reduced transportation cost and enhanced and guaranteed the timeless of logistics. The opening of this transportation line will boost the trade of Tibet Autonomous Region and Guangdong Province and also play on distinctive role in coordinate regional economic, social development nationwide, which marks the successful operation of the line.”
And more importantly, it could one day link the Mainland to Nepal.
The block train started from Dalang in Guangzhou province; it used the Chengdu-Chongqing Railway, Qinghai-Tibet Railway, Lhasa–Shigatse Railway, Shigatse-Gyirong Highway before crossing into Nepal at Kyirong and finally arrived in Katmandu. The 6,070 km long journey included 4,200km by rail and 870 km on highways.
The cargo was worth of 19 million yuan; it included garment, furniture, electric appliances, electronic products, etc.
All what India does not want to be dumped on her territory.
However take a look at the map above, it seems to indicate that China would not mind continuing the line to southern Nepal and India.
To dump what?

The Tibet-India Border trade
Incidentally, during the current year, the Indian trade with Tibet via the Nathula pass in Sikkim has surpassed all previous records. According to The Times of India, during the May-November trading season, the export of Indian goods to the TAR amounted to Rs 63.68 crore as against imports worth Rs.1.8 crore: "Bilateral trade saw an increase of around Rs 16 crore this year as far as exports were concerned. Imports plummeted by around Rs 5 crore as against that in 2015, according to official data."
The report says that initially, Indian traders were reluctant to trade with Tibet due to lack of tradeable items: "After six seasons of low-profile trading, the directorate general of foreign trade in 2012 revised the list of tradeable items and allowed traders from both sides of the border to export and import more commodities."
Interesting development.  By the way, what has happened to the project of having a railway line to Chumbi?