China is getting ready 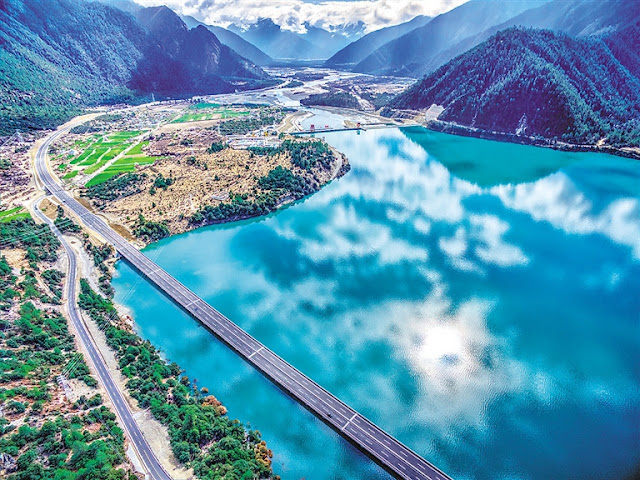 As the Tibetan Sikyong (Prime Minister) begins his second term with a new Kashag (Cabinet) in Dharamsala, (all of the ministers were approved after a majority vote during the first day session of the 16th Tibetan Parliament), the Chinese Government continues to reinforce its presence on the plateau.
Of course, Beijing does not appreciate much democracy; Foreign Ministry spokesperson Hong Lei reiterated that what he calls the ‘so-called Tibetan government-in-exile’ has no legitimacy; the democratic elections-in-exile are considered by China a ‘political slapstick’.
Nothing new!
We know that Xi Jinping’s regime is not very fond of democracy.
Hong Lei even commented on the ‘separatist political group in India’ (i.e. the Central Tibetan Administration or CTA in Dharamsala) by pointing out that the CTA was not recognized by any country.

The deluge continues
In the meantime and perhaps more critical for the survival of the Tibetan identity, the deluge of Chinese tourists continues in Tibet.
According to Lhasa’s Tourism Bureau, Lhasa received 176,100 tourists during the May Day holiday (April 30-May 2); this represents a year-on-year growth of 11.52 percent. Tourism revenue during this period was 1.1 billion yuans (about 169 million U.S. dollars), up by 18.49 percent compared to the previous year.
Mainland’s travel agencies promote package such as “Three-day tour to Nyingchi for enjoying peach blossoms”, “Three-day tour to Mt. Qomolangma (Everest)”, “One-day tour to Namtso”, etc.
The promotions tell the tourists that they will not only “enjoy beautiful scenery but also visit local families and taste unique Tibetan delicacies.”
With more serious consequence for India, Bayi’s Tourism Bureau announced that the district received more than 174,000 tourists from January to March in 2016, up by 53.23 percent.
Bayi lays just at India’s doors.
Bayi (it translates by ‘8-1’, meaning that the area belongs to the People’s Liberation Army whose anniversary fall on 8-1 or August 1) is located north of Indian border of Arunachal Pradesh.
During the same period, the tourism revenue for the area reached 157 million yuans (about 24.13 million U.S. dollars), a year-on-year increase of 37.3 percent.
Xinhua says “Tourism is developing steadily and rapidly”.
An understatement!
The Chinese government promotes "Pure Land, Beautiful Nyingchi" or the “The Switzerland of Tibet” or the gorges of the Yarlung Tsangpo (Brahmaputra).
Beijing says that the area: “enjoys unique ethnic culture, biological culture and beautiful scenery. Bayi District has developed rural tourism, folk custom tourism and other forms of tourism.”
In the meantime, the Indian Government sticks with its archaic mindset; an antiquated ‘Inner Line Permit’ dating from the Raj still prevails and there is no will to change this in Delhi. India is unable to emulate China (in this field at least).

Infrastructure Development
In order to welcome millions of tourists, the infrastructure has developed at fast pace on the plateau.
On May 23, China Tibet Online asserted: “News World's most beautiful highway, Lhasa-Nyingchi Super Highway”
A spectacular picture is captioned. “Ecology corridor, green gallery, landscape avenue ...stunning scenery of the Lhasa-Nyingchi Super Highway attracts lots of people.”
And of course, the road leads to the Indian border.
Then, China plans a new railway between Chengdu and Lhasa.
The Economist recently wrote: “Plans for a new railway line into Tibet pose a huge technological challenge—and a political one.” 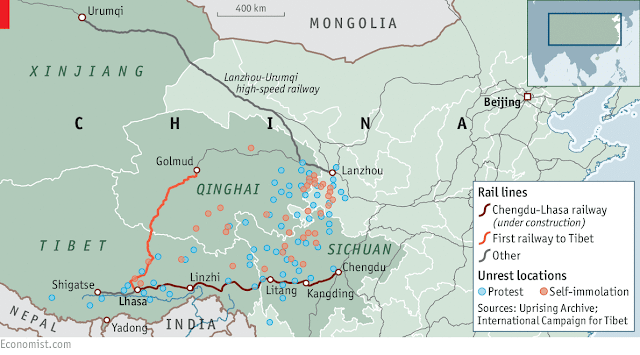 The London-based publication noted: “A COLOSSAL roller-coaster is how a senior engineer described it. He was talking about the railway that China plans to build from the lowlands of the south-west, across some of the world’s most forbidding terrain, into Tibet. Of all the country’s railway-building feats in recent years, this will be the most remarkable: a 1,600-kilometre (1,000-mile) track that will pass through snow-capped mountains in a region racked by earthquakes, with nearly half of it running through tunnels or over bridges. It will also be dogged all the way by controversy.”
The Economist added: “It will be just under half as long again as the existing line to Tibet, but will take three times longer to build. The second line’s estimated cost of 105 billion yuan ($16 billion) is several times more than the first one. Lhasa is about 3,200 metres (10,500 feet) higher than Chengdu, yet by the time the track goes up and down on the way there—crossing 14 mountains, two of them higher than Mont Blanc, Western Europe’s highest mountain—the cumulative ascent will be 14,000 metres.”
It does not seem to be a problem for the Chinese planners.
Once the railway is functional, the ‘Middle Path’ approach of the Dalai Lama will have no meaning as the entire plateau will be integrated to the Mainland and 100 million Chinese tourists will pour into the Roof of the World every year.
Is the new Kashag of Dharamsala aware of this?

Other developments
In parallel to the new railway line, smaller projects are going on.
For example, the Gonggar Railway Station at the Lhasa Airport, now under construction.
Xinhua reported: “At present, station projects of Gonggar Railway Station in Tibet Autonomous Region of the Sichuan-Tibet Railway is stepping up its construction, and expected to be completed by the end of 2016.”
The news agency adds that the new station will be adjacent to 101 Provincial Highway, 15 km distance from Gonggar/Lhasa Airport, “It will provide convenience for many domestic and overseas tourists in and out of Tibet after the completion of the railway station.”
The building of a sophisticated electricity grid is also progressing at fast pace.
According to China Tibet Online: “Key western development projects—the Qinghai-Tibet networking project has been in operation for 5 years, withstanding the cold, low atmospheric pressure, high winds and sand, and other harsh environmental tests. Operations have remained safe and stable, bringing benefits to the people along the ‘bright, heavenly road’ in Qinghai and Tibet.”
The National Grid Qinghai Electric Power Company provided some data: since its inception, the Qinghai-Tibet networking project has already conveyed 3.3billion kW/h to Tibet, equivalent to 416,900 tons of standard coal transport, which is a reduction in carbon emissions of 1.03 mlillion tons.
More interestingly: “The Qinghai-Tibet D.C. power system successfully carried out reverse-carry loads. The Tibet power grid achieved 332 million kW/h of hydropower delivery during the high water level periods, all of which was consumed within Qinghai Province.”
It means that once a few dams, now under construction are operational (particularly on the Yarlung Tsangpo/Brahmaputra), Tibet will be able to supply China with electricity.
The Chinese website further describes the project: “The Qinghai-Tibet networking project is a key western development project. It is also the world’s highest D.C. electricity transmission project and the longest transmission line across frozen ground. Located mostly in a low atmospheric pressure area with a lack of oxygen, cold, high winds, and radioactive hot spots, at an average elevation of 4,500 meters high, the highest elevation point is at 5,300 meters high. More than 900 kilometers of the line are located in areas above 4,000 meters high.”
All this has important strategic implications for India.
Why?

Implications for India
In an article titled “Across China: Heavenly road brings the high life to Tibetan Plateau”, Xinhua explains the reason.
The article is about the Xinjiang-Tibet Highway, known in China as National Highway 219 and in India by his infamous name ‘the Aksai Chin road’. Infamous because the Nehru government took more than 5 years to discover that the PLA had built a road on Indian territory.
Xinhua remarks: “It is the melon season in neighboring Xinjiang Uygur Autonomous Region, fresh fruit is stacked up at the roadside, waiting to be ferried through the Kunlun Mountains and up to the plateau along the Xinjiang-Tibet Highway.”
This road has not only linked the two most strategic (and restive) provinces of China (Tibet and Xinjiang) but also helped to tremendously cut the cost for the occupation Western China by the PLA.
Xinhua takes an example: “Less than a decade ago, a kilogram of melon could sell for 60 yuan (about 10 U.S. dollars) on the plateau.”
It then quotes Zhang Lei, head of an armed police transport detachment stationed in Ritu County along the highway: “Last year the price was just a little over 10 yuan.”
National Highway 219 is built at an average altitude of over 4,500 meters and is the world's highest motorable road. 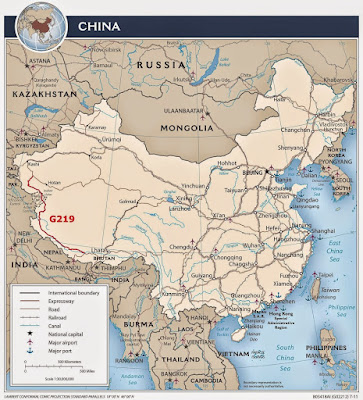 The Chinese news agency gives a historic background: “Originally covered by gravel in 1950s, the 2,340-kilometer highway was almost fully paved by 2013, slashing the travel time between Yecheng County in southern Xinjiang and Ngari Prefecture in Tibet from 15 days to just one day, with another day to reach Lhasa. Accidents and fatalities also decreased dramatically.”
Song Shibing, chief of a transport police troop, says that the area has seen dramatic changes in the lifestyles of local people: “Back in 2003, he tried to buy an axe from a herdsman for 100 yuan (several times the price of an axe in a shop), but the herdsman refused his money and brandished an empty 5-liter bottle instead. He wanted diesel.”
The article concludes: “The highway today looks to me like an airport runway -- wide, flat and smooth - a heavenly road, indeed.”
It is certainly a great boon for the PLA and China’s border management in general.
Xinhua explains: “With a safe, modern highway, transportation costs from Yecheng to Ngari have fallen by 55 percent, leading to cuts of about 40 percent in the price of commodities in the Tibetan town. Better yet, the number of tourists in Ngari has surged five-fold.”
In other words, the ‘Indian front’ will get its supplies faster and cheaper.
The time has perhaps come for Delhi to wake up and study what is happening on the other side of the LAC.
It is particularly important at a time, when the 2 fronts facing India (in Ladakh and Arunachal) have been merged into one Western Theater Command, greatly improving the management of the borders with India.
A telling image: last week photos of 15th Airborne's Corps exercising in Tibet appeared on the Chinese Net.
A caption says: “a mechanized regiment of 15th Airborne Corps, conducted a battalion size rapid deployment into the Tibetan Plateau. Pictures from this ‘independent action’ exercise.”
China is clearly getting ready.
Watch the 15th Airbone Corps practicing on the plateau. 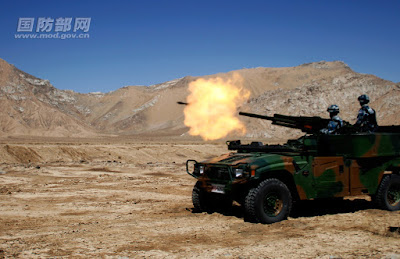 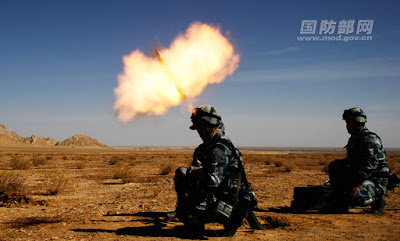 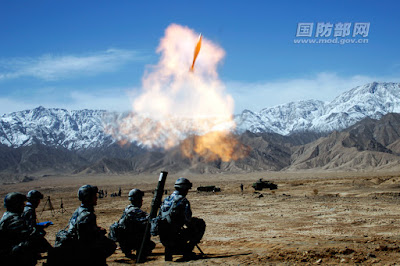 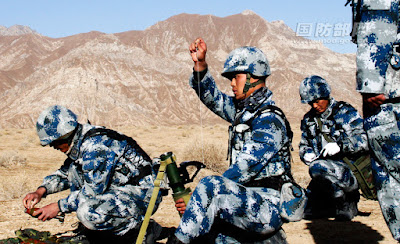 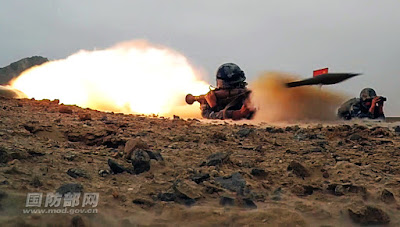 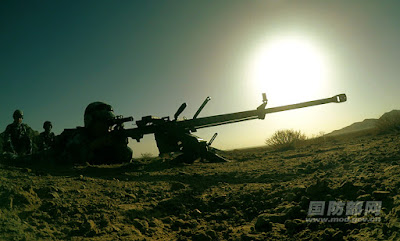 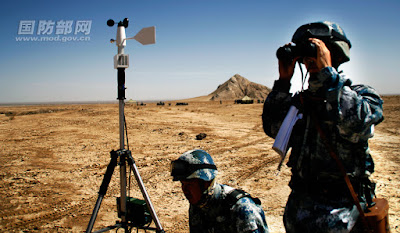 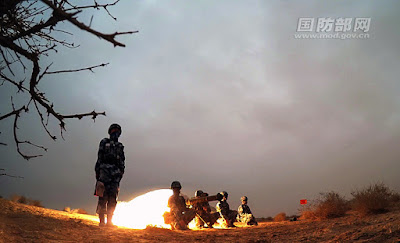