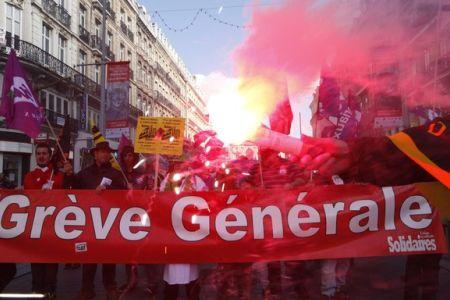 In France, May is traditionally the month of pleasant weather, but also the period when the French go on strike.
Considering that as a student I lived through the momentous month of May 1968, I should not have overlooked this detail when I booked a ticket to visit my family.
This year, the French confront a new wave of strikes; this time it is against a new Labour bill, known as the ‘El Khomri Law’ after the lady minister who introduced it.
For the CGT, the hard-line trade union, like every spring, the ‘rolling strikes’ are a ‘make-or-break’ situation. Why?
Francois Hollande’s government has invoked Article 49.3 of the Constitution, allowing the government to bypass the parliament to get the new labour law through.
The Government used this rare procedure because part of the ruling Socialist party were ready to vote against their own government and like in India, whenever the Government proposes a reform, the opposition does everything to block it …for the sake of opposing something they would have liked to propose themselves.
You may ask what a ‘rolling strike’ is.
It is a French specialty, when truckers, then rail workers, then dockers, then airport staff, etc, go on strike one after the other.
President Hollande, whose popularity has rock-bottomed in recent months, has remained firm: “Too many governments have given in, that’s why the country was in the state we found it in 2012. A compromise has been reached, a balance has been found, the pro-reform unions and the majority of Socialist supporters are behind this reform,” he said in an interview, though more than 1000 protesters have already been arrested and 300 people have been hurt in clashes with the police.
But despite the periodical turbulences and the seasonal depression, France is doing ‘better’, in Hollande’s words.
Not everybody is convinced, but some facts speak for themselves.
Take the order from MSC Cruises, signed in April with STX of Sant-Nazaire, for four new cruisers. The 200,000 tons ships will be able to carry 5,400 passengers each; the first one, based on a next-generation technology, will be delivered in 2022.
Then Australia selected DCNS, the French shipbuilding giant, to build 12-ship submarines. Many analysts were caught by surprise as the state-owned company — which is building 6 scorpene submarines in India with the Mazgaon docks — was in competition with the Japanese and Germany’s ThyssenKrupp Marine Systems (TKMS). The contract is said to be for US $38 billion.
In his April 26th announcement, the Australian Prime Minister Malcolm Turnbull said that the decision was ‘unequivocally’ in favour of the French: “This was the absolutely unambiguous recommendation from the Department of Defence that came through the competitive evaluation process.”
And of course, there is the Rafale combat aircraft which has done rather well last year: 24 planes were sold to Egypt and 24 to Qatar, and despite the prevarication of the Modi Sarkar (probably due to political considerations after the publicity around the Augusta-Westland scan), Delhi will sign for 36 pieces.
France however remains hardly attractive for Indian investments. A few months ago, Business France, the national agency helping the international development of France’s economy, released its 2015 Annual Report: Foreign investment in France. It analyzed foreign investments in France and their contribution to the French economy. Though over 120 Indian companies are operating in France, employing some 7,000 people, it is not much despite companies like Aequs, a Belgaum-based company specializing in developing and producing engineering solutions for the aerospace, automotive and oil sectors, acquiring the Besançon site of the French company Sira which employs 320 people.
Due to several factors such as the tough French visa policy, the labour laws (pre the 49.3 procedure), the difficulty of the language (compared to UK for example), and also the lack of knowledge about India in general, the investment climate is not rosy.
Another sign: last week, the daily Le Monde published a study showing that the brain-drain from France is becoming an inescapable trend.
Prepared by the Council of Economic Analysis, a report entitled “Préparer la France à la mobilité internationale croissante des qualifies” (Prepare France for qualified people’s mobility) speaks of the exodus of French brain power. According to the National Institute of Statistics, between 3,3 and 3,5 million people, born in France and aged between 25 and 55, live abroad.
The rate of expatriation has doubled between 1980 and 2010, and though the emigration is less than in countries like Germany and the emigration and immigration of qualified people more or less balances, the worrying aspect is that the incoming brains do not settle in France for long; they usually return to their country after a few weeks.
Despite all this, France is the world’s top tourist destination (with 84.7 million foreign tourists in 2013) and tourism is a key sector of its economy, accounting for more than 7% of GDP and two million direct and indirect jobs.
There are indeed many great eatable and drinkable goodies which we can’t advertise in these columns, and though the state of Emergency is still in force after the terrorist attacks of November 2015, the picturesque villages, the old manors, the quiet rivers and the inimitable capital, Paris with its cafes, museums or shows, remain very special.
My country of origin (and Asterix’s too) remains “Douce France, doux pays de mon enfance’’ (Sweet France, Sweet Country of my childhood). My parents’ generation loved these lyrics of the famous French crooner Charles Trenet.
Changing France, even if not always innovative France (mainly due to the seasonal strikes), remains charming France.
Posted by Claude Arpi at 9:25 AM