The UN is wrong about Bhutan. It really is one of the happiest places on earth 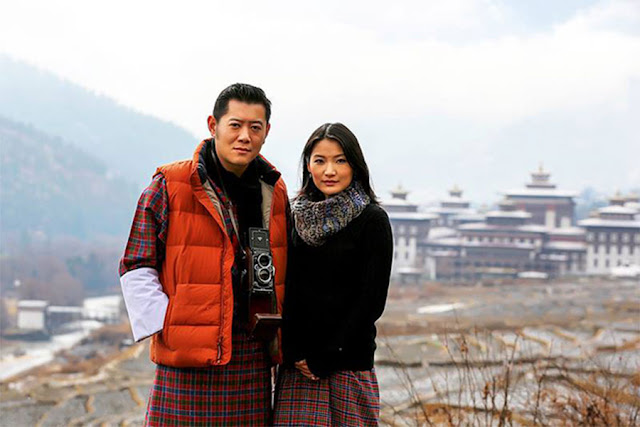 My article The UN is wrong about Bhutan. It really is one of the happiest places on earth appeared in Mail Today.

Bhutan was recently in the news when the Duke and Duchess of Cambridge visited the ‘Land of Happiness’ and trekked up to the picturesque Tiger’s Lair, also known as Paro Taktsang in Dzongka.
The monastery complex, hanging on a cliffside of the upper Paro valley, was built during the 17th century on the spot where the Swat-born Guru Padmasambhava meditated for three years, three months and three days. Paro Taktsang is one the 13 ‘taktsang’ caves which were blessed by the Master of Supreme Happiness.
Variables William and Kate had to walk for nearly two hours to reach the gompa.
Looking at the photographs taken by the journalists who followed them half-way, it reflects that the royal couple must have experienced some bliss during the unusual trek.
Their visit and encounter with the charming royal couple of Bhutan (sometimes patronisingly called, ‘The Himalayan William and Kate’) were moments of rare happiness.
A few weeks earlier, data collected by the United Nations from people in 156 countries had surprisingly ranked Bhutan 84th in the list of Happy Nations.
Different variables were used: real GDP per capita, social support, healthy life expectancy, freedom to make choices, generosity and perceptions of corruption.
The fact that Denmark, Switzerland, Iceland, Norway and Finland are the five toppers shows that these variables are based on Western values.
Can you believe that China is listed 83, while India is 118?
Each country is also compared against Dystopia, a hypothetical nation characterised by human misery, oppression, disease, overcrowding and pervasive fear, a place where everything is wrong.
Dystopia is the opposite of Utopia, synonymous for an ideal society with no crime or poverty.
Despite the Western prejudice in the data collection and analysis, it is interesting to see that the UN has begun studying the concept of ‘happiness’ which has been central to the Indian and Himalayan culture (including in Tibet before the Communists ‘liberated’ the Roof of the World in 1950).
Whether on the Roof of the World, in Sikkim or in Bhutan, Padmasambhava has played a crucial role in this search for a deeper meaning in life and ultimately ‘sustainable happiness’.
It is significant that Bhutan Prime Minister Tshering Tobgay recently gave a most inspirational TED talk at Vancouver, Canada.
Tobgay spoke with great eloquence of the special culture of the Land of the Dragon, its concept of Gross National Happiness, climate change, environment and free education for all. Tobgay said: “Of the 200-odd countries in the world today, it looks like we are the only one that’s carbon neutral. Actually, that’s not quite accurate. Bhutan is not carbon neutral. Bhutan is carbon negative.”

Environment
The ‘Happy’ prime minister asserted: “But it is our protected areas that are at the core of our carbon neutral strategy. Our protected areas are our carbon sink. They are our lungs. Today, more than half of our country is protected, as national parks, nature reserves and wildlife sanctuaries.”
The latter are connected through a network of biological corridors: “Our animals are free to roam throughout our country,” Tobgay added.
Even animals should be happy.
Just before 175 countries signed the COP21 agreement, Topgay mentioned his country’s participation in safeguarding the planet; projects such as ‘Bhutan for Life’ intend to improve the country’s environment… for the benefit of the earth.
With its 70 per cent forest cover (it is the highest proportion in Asia), Bhutan has almost five million acres of protected land, rich in forests, pristine rivers and thriving wildlife.
The question is: can it last? If one believes news reports, dam companies will soon rule the Land of the Dragon. With ‘development’ becoming the universal god, can the society remain ‘happy’ and contented?
Two years ago, the Royal Institute for Governance and Strategic Studies (RIGSS) invited former Foreign Secretary Shyam Saran for a lecture — “Why Bhutan should worry more about climate change”.
The talk touched some serious issues such as hydropower, national revenue, biodiversity, livelihood and, indirectly, ‘happiness’.

Glaciers
Shyam Saran spoke of the climate change taking place in Bhutan, which accelerates the melting of glaciers: “This risk, at any time, can lead to landslide, avalanches and glacier lake outburst floods (GLOFs),” he added.
He mentioned other vulnerabilities, particularly the hydropower plants on which Bhutan is heavily dependent to balance its budget.
Some of these dams, if not properly conceived, could speed up the destruction of natural resources. But, what is this true happiness that everybody is speaking about?
A friend, who often visits Bhutan, told me that on his first visit, he was surprised to see everywhere ‘general stores-cumbar’, ‘hardware store-cum-bar’, even ‘medical shop-cum-bar’.
It is true that the 14thcentury saint, Drukpa Kunley, the Mad Yogi who introduced Buddhism in Bhutan, was an adept of the good things in life and he is still revered by all in Bhutan.
On April 23, the Queen Mother, along with a royal princess and several ministers, trekked for four hours along a 21-km trail where Drukpa Kunley meditated, drank, hunted and subdued demons; it is still a place of pilgrimage with a number of sacred spots linked to Kunley.
I sometime wonder how Padmasambhava would have fared under the UN criteria.
Strange, isn’t it? Ban-Ki-moon should visit the place.
Posted by Claude Arpi at 9:28 AM