Dharamsala and Beijing: the negotiations that never were 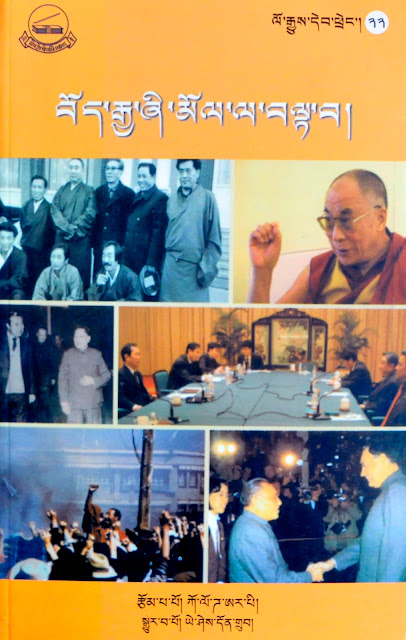 Phayul.com reported that the Tibetan edition of my book Dharamsala and Beijing: the negotiations that never were was launched yesterday in Dharamsala by the Library of Tibetan Works & Archives (LTWA), which edited the translation.
The Dharamsala-based webiste said: "The Tibetan translation of the book Dharamsala and Beijing: The Negotiations That Never Were by noted scholar Claude Arpi was launched today by the Minister of Education (Kalon) Ngodup Tsering at the LTWA in Gangchen Kyishong."
Geshe Lhakdor, the LTWA's Director noted: "It may sound simple and insignificant if we just see it as a work of translation. However, we know that even translating a thin book take a lot of effort. Therefore we need to appreciate such hard work and efforts.”
While thanking those who helped make the book a reality, Yeshi Dhundup, editor at Tibet.net, took around two years to translate the book, using his after office hours and holidays; he explained: "I translated the book with a hope that it would be of some help to those who want to read about the Tibet-China bilateral dialogues in Tibetan and I hope that it would be useful to all the Tibetans.”
Kalon Ngodup Tsering remarked: "It is imperative that we know in detail about the Tibet-China Negotiations, which we often speak on. However, there are not many who have full in-depth knowledge about it. So this book may help especially those doing research works or for anyone willing to know.” 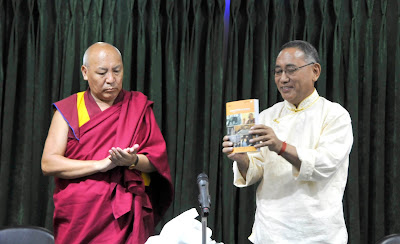 Here are a few comments about the English version:

The book is enriched by the author’s deep access to all the Tibetan principals involved in the dialogue process and the actual negotiations. It is also enriched by the author`s own extensive research on a subject much commented but little researched on. The Negotiations that Never Were will form the basis of future Sino-Tibetan negotiations literature because the book's enduring contribution to this literature is the blow-by-blow accounts it gives of all the contacts and discussions between Dharamsala and Beijing.
www.sify.com

The Negotiations that Never Were will form the basis of future Sino-Tibetan negotiations literature because the book's enduring contribution to this literature is the blow-by-blow accounts it gives of all the contacts and discussions between Dharamsala and Beijing.
In reviewing this book one marvels at the fact that these negotiations took place at all. In international politics, diplomacy is always backed by military force. In conducting such relations among sovereign nations, the unstated message always is, negotiate, or else. The option of war is used as a compelling argument for concerned parties to choose negotiations as a less expensive way to settle outstanding disputes. Tibetans, committed to non-violence, do not have the military option. Despite this, why did the negotiations take place at all? That these negotiations took place is a reflection of His Holiness the Dalai Lama's hold on his people and the quality of leadership he has provided.
A welcome addition in the book is the author's examination of the attitude of individual Chinese to the Tibet question. Although official China says there is no problem in Tibet, un-official China, that vast interlocking network of human rights and environmental activists, writers and scholars who form the country's nascent but growing civil society, sees that there is a big problem in Tibet and the government is mishandling it.
www.tibet.net

The annexation of an independent Tibet is irrefutably outlined in Claude Arpi’s book, Tibet: The Lost Frontier, which was published last year. Arpi, a Frenchman based in South India, is arguably India’s most effective communicator of the Tibetan cause. He displays the research of a scholar and the insight of a strategist. This year he has written a follow-up book, Dharamsala and Beijing : The Negotiations that Never Were, published by Lancer Publishers. The book is an eye opener. It meticulously describes the entire farcical engagement since inception between Beijing and the Dalai Lama’s aides.
www.boloji.com

In 1947 there was no India-China border. There was only the India-Tibet border. Chinese Premier Zhou Enlai hoodwinked Pandit Nehru. From then up till now the Chinese brazenly lied, indulged in doubletalk and blandly denied self-evident truths. From then up till now India and America lamely accepted such contemptuous treatment. In 1954 India and China signed a treaty for eight years by which among other things India recognised Tibet to be part of China. Beijing violated the assurances given in that treaty by transgressing the border. A confused Nehru decided to keep Parliament in the dark. He persisted with secrecy about Chinese encroachments during the following years.
That was when this reviewer through an article in 1960 demanded Nehru’s resignation. As a junior he made this reasonable demand when media doyens critical of Nehru’s China policies such as S Mulgaokar and Frank Moraes could not bring themselves to state this. No wonder it took a child to blurt that the Emperor wore no clothes! Zhou told Nehru that he was ignorant about the McMahon Line until he studied the border problem. And today China claims Arunachal Pradesh to be part of China! Beijing and Tibet broke ice. Beijing allowed fact-finding missions from Dharamsala to visit Tibet and view its progress. The Chinese genuinely thought that better roads and infrastructure had made Tibetans happy. The frenzied reception given to the Dalai Lama’s representatives by the Tibetans stunned them. Four succeeding missions were doomed to fail. I think the Chinese fail to empathize with Tibet because Tibetans believe in God. Most Chinese don’t.
In 2005 former Defence Minister, Army Chief and Vice Chairman of the Central Military Commission, Chi Haotian, said in a speech: ‘Maybe you have now come to understand why we promulgate atheism, if we let all Chinese people listen to God and follow God, who will obediently listen to us and follow us?’
Claude Arpi’s book exposes the painful repetitiveness of all contacts between China and Tibet, between China and the rest of the world. Tibet was like a woodpecker trying to penetrate a block of steel. The Chinese refused to countenance the slightest change in Tibet. In 1988 Dalai Lama made the Strasbourg Proposal and adopted the Middle Way, demanding autonomy instead of independence. Beijing kept calling him a ‘splitter’. China continued to lie and deceive the world to keep talks going. Only once in 60 years did a senior Chinese official speak the truth. In 1980 CCP General Secretary Hu Yaobang admitted: ‘Our party has let the Tibetan people down. We feel very bad!’ Very soon he had to eat his words and fall in line. The world kept hoping for China to change. It was a futile hope.
The Statesman

The book
In October 1950, Communist China invaded Tibet. After nine years of difficult co-habitation with the occupiers, the Dalai Lama, the young temporal and spiritual leader of the Tibetans, had no choice but to flee his country to take refuge in India.
It took 20 years for the Tibetans to renew a dialogue with the leaders in Beijing. Soon after Deng Xiaoping’s return to power in 1978, the first contacts were made. Using rare documents, this is the story of thirty years of encounters between the Tibetan Administration in Dharamsala and Beijing.
Today the stalemate continues; Beijing refuses to offer any sort of concession to the Dalai Lama’s demand for a genuine autonomy for Tibet. Just like the border ‘talks’ between India and China, the negotiations with Dharamsala have never really started.
Reading through this book one understands how the relations between India and China are inextricably linked to the status of Tibet. Further, the present unrest in Tibet renders China unstable and increasingly belligerent towards India which gave refuge to the Tibetans.

Email ThisBlogThis!Share to TwitterShare to FacebookShare to Pinterest
Labels: LTWA, The Negotiations that never were, Tibetan translation, Yeshi Dhundup