The migration of populations from the frontiers, particularly the borders with China in Ladakh, Uttarakhand or Arunachal Pradesh, is a modern tragedy.
It is rarely mentioned in the Indian press, though a few weeks ago, The Times of India (TOI) reported from Dehra Dun: “As villages along the international border in Uttarakhand face out-migration on an unprecedented scale, uninhabited areas lie open to territorial claims by the Chinese.”
The journalist studied the case of Niti, the last Indian village, located 26 km south from the Niti pass, which demarcates the border between Tibet and India. For centuries, the village, situated at an altitude of 3,600 metres, saw traders, pilgrims and officials freely moving between the two countries and the area was flourishing. Unfortunately, all this stopped in 1962; today only 35 families remain in the village; a few decades ago, there were 250.
Trade with Tibet (today China) is dead and the area is virtually closed to outsiders; an Inner Line Permit is not easy to obtain from the local authorities.
Located 88 km from Joshimath, though the village could have been developed into an eco-tourism centre, it was not done, probably due to the ‘sensitivities’ of the Chinese authorities on the other side of the pass.
Even amongst the remaining 35 families, most of the young people have moved to the plains in search of a better life.
The Chinese have no qualms to develop their side of the Himalayan range and while Beijing has taken great leaps forward to built its border infrastructure, Delhi has worked at snail’s speed, struggling to create a semblance of infrastructure; migration is the direct outcome of this slow pace.
Soon after he took over as the Union Minister of State for Home Affairs, this writer had interviewed Kiren Rijiju, a native of Kameng district of Arunachal Pradesh; he had then said, “My immediate concern is to concentrate on the India-China border.” The young and dynamic Minister added, “It means development of infrastructure, roads, communication, other basic amenities; facilities for local people living in the border area. They should be provided with electricity, water, food.”
But it is not a glamourous process; indeed perseverance and an unshakable will are required to change the tide. Migration is today one of the major issues facing the populations along the Line of Actual Control (LAC) in Ladakh or the McMahon line in Arunachal Pradesh.
Why should a farmer or a pastoralist, living near the LAC in Ladakh, remain in his native village with the risk of being harassed by the Chinese People’s Liberation Army, when he can earn a decent living as a taxi driver or by running a small hotel in Leh?
Defence analyst, Nitin Gokhale, who visited most of these borders areas, wrote about the sad situation in Ladakh: “Chushul, an important village very close to the border did not have a single landline telephone and the lone mobile tower in the vicinity was more a showpiece than a functional facility. The anger among the villagers at the lack of what is now a basic necessity was palpable.” 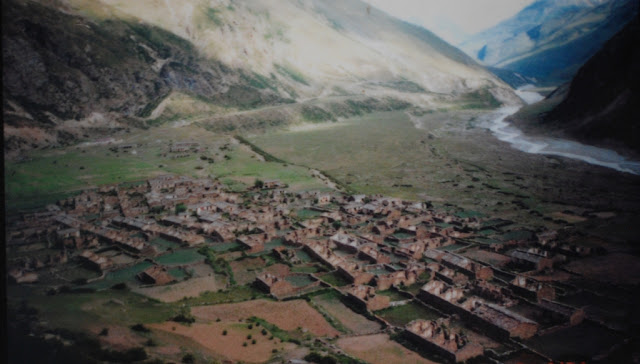 It is not an easy challenge. In one of his monthly radio programs, Maan ki Baat, Prime Minister Modi had announced that he was “deputing Central Government officials to find solutions to problems being faced by the region”. The Ministry of Development of the North-Eastern Region was to send officials to hold week-long camps. The outcome has never been made public.
Remember Verrier Elwin’s A Philosophy for NEFA, so dear to Nehru! Based on French philosopher Jean-Jacques Rousseau’s theory: “Nothing is so gentle as man in his primitive state, when placed by nature at an equal distance from the stupidity of brutes and the fatal enlightenment of civil man,” the romantic view of the tribal folks ultimately amounted to the segregation of a large chunk of the Indian population and a total lack of development of these strategically important regions …and today, irreversible migration.
One of the decisions taken by Modi Sarkar has been to modify the guidelines of the Border Area Development Programme (BADP) drafted some 10 years ago. According to the new notification, “The main objective of the BADP is to meet the special developmental needs and well being of the people living in remote and inaccessible areas situated near the international border.”
The BADP is a 100 per cent centrally funded scheme covering in priority all Indian villages located within 10 km of the International Border. Within the 10 km, some villages are identified by the Border Guarding Forces for most immediate help.
This is one way to counter the Chinese claims, which regularly translates into deep incursions into Indian territory; depopulation plays into the Chinese hands. Will the BADP scheme reduce the migration from the borders? It is doubtful, because despite good intentions, how will the project be implemented on the ground, and crucially how soon?
Another issue is the stagnating petty trade between India and Tibet. While Nathu La is better organised, the traders at Shipki La (Himachal) and Lipulekh La (Uttarakand) face many bureaucratic hurdles. Though border trade could have been a way to stop migration, the local babus are not really motivated, while China is not interested to reopen the traditional passes.
Whether in Uttarakhand, Ladakh or Arunachal, life is hard on the borders.
The serious strategic implication of the depopulation of the entire Himalayan belt is that it has opened wide the door to Chinese incursions.
Take the Barahoti grazing ground in Chamoli district; it is the first area claimed by China as ‘theirs’ in 1954. If there are no Indian grazers to go up with their herds at the beginning of the summer season, the Chinese are quick to send their own to ‘mark’ China’s presence. Recently, Indian district officials had to be sent for a few weeks to ‘stamp India’s presence’ as hardly any grazer from Niti is interested anymore. The TOI admitted: “Barahoti had begun emptying out around eight years ago. Ever since, district officials have been marking the territory at regular intervals.”
And in Delhi, very few ‘strategists’ perceive that in case of a conflict, the ‘local’ population play a crucial role to play.
One possible solution would be to replace the present IAS cadre in these areas by dedicated officers, like it was done in the 1950s and 1960s with the Political Officers (POs) of the defunct Indian Frontier Administrative Service.
Every year, the POs would tour these remote border areas, meet the ‘locals’, get to know their problems and dutifully report in long notes to the ‘durbar’.
One can’t expect young IAS officers, dreaming only of a Delhi posting, to be of the caliber of the old Pos.
Though Mr Modi’s initiative to send officers to the spot is certainly a great improvement in the right direction, a special ‘border’ cadre could help revert the tide. It may soon be too late.
Posted by Claude Arpi at 6:10 AM