On October 25, the Fourth World Buddhist Forum (WBF) closed its doors at the Brahma Palace on the Lingshan Mountain in Jiangsu Province.
The Forum had previously been held in the mainland in 2006 and 2009, and in Hong Kong in 2012. At that time, the Chinese-selected Panchen Lama, Gyaltsen Norbu was the star attraction.
The official press in Beijing asserted that “one thousand Buddhist personages from 52 countries and regions attended the two-day forum, more than all previous years, fully reflecting the WBF’s internationalism and authority.”
This year, the WBF’s theme was “Common Aspiration, Common Action—Embracing Exchanges and Mutual Learning”. Xinhua said that it “embodied the consistent style of all previous WBFs in inheriting the past and ushering in the future.”
The participants spoke of “building a community of human destiny as the common aspiration and work hand in hand through exchanges and mutual learning to highlight the Buddhism’s force of purifying the people’s hearts and good deeds to benefit all.”
This sounds good.
But the most surprising aspect of the event was the extremely discreet presence of the Chinese Panchen Lama who just appeared in the group discussion to suggest stricter discipline measures for Buddhist monks.
Let us remember that Gyaltsen Norbu was selected by Beijing and groomed as the 11th Panchen Lama, while the candidate recognized by the Dalai Lama languishes for the past 20 years under house arrest, somewhere in China.
Why was Gyaltsen Norbu nowhere to be seen during the opening and closing ceremonies, while he had been the Chief Guest on the occasion of the previous Forum?
As I earlier mentioned on this blog, Beijing seems unable to fully ‘control’ their Panchen Lama candidate (see, Hot Summer on the Tibetan Plateau).

Is Gyaltsen Norbu not a good Communist?
In June, Xinhua announced that President Xi Jinping ‘accepted an audience’ with Gyaltsen Norbu at Zhongnanhai in Beijing on June 10. The term ‘accepting an audience’ is a euphemism to say the least, because the ‘audience’ seemed more like summon-cum-lecture.Was Gyaltsen Norbu not following the Party's diktats?
He had probably been speaking too much his mind for Beijing’s taste.
During the WBF, Norbu appeared only briefly during a round table discussion.
The Catholic news agency ucanews.com, reported that at the WBF, he called "for tighter controls over monks to ensure they follow Buddhist precepts.”
The Communist Party is uncomfortable with ‘roaming’ monks not enrolled in ‘official’ monasteries. These monks are believed to be the most subversive elements “particularly prone to breaking precepts. It would also be difficult for any other authority or the police to seize them if they do not break the law," said Norbu. 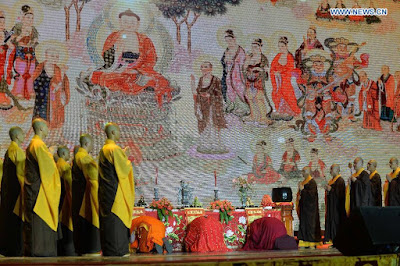 The Communist Party tightly monitors activities in the monasteries through hand-picked Monastery Committees, fierce watchdogs working for the authorities in Beijing.
Monks who follow the Buddha’s ‘wandering’ precepts are considered as extremely dangerous for the Party.
The same ucanews.com noted that “Norbu's remarks represent a return to the party line after a speech in March in which he warned that China's quotas on Tibetan monks and nuns – a rarely acknowledged open secret – meant a danger of Buddhism existing in name only," the news agency adding: “His comments were viewed by some observers as a jab at Beijing's Tibet policies. However, other analysts noted the Communist Party would have vetted his speech in advance.”
Probably not, and that is why he was summoned in Zhongnanhai in June by the President himself.
During the WBF, the Chinese protégé uttered some banalities: “Social changes have also resulted in changes in the system and orders within temples. It is important to adapt to the changes in time" or “it is important to train young talents, …as it would decide what kind of role Buddhism can play in society, …The key is to ensure the practice and doctrine learning of the young Buddhists.”
And he left…
China seems to have a serious problem with recalcitrant Tibetans, even when they are meticulously hand-picked by the Party.
It has been the case of the 10th Panchen Lama, it is now the case of Gyaltsen Norbu, and probably many more not well-known lamas.
According to the White Paper released in September, there are 358 living Buddhas (reincarnated lamas), of whom more than 60 have been selected according to the 2007 rules and regulations of the Party.
How many are fully under the control Party is a question difficult to answer.
Did you notice that Gyaltsen Norbu also missed the festivities held in Lhasa on the occasion of the 50th anniversary of the founding of the Tibetan Autonomous Region? Strange?
Sixty-five years after being ‘liberated’ Tibetans are still rebel. Beijing should find out why.
Posted by Claude Arpi at 11:43 AM