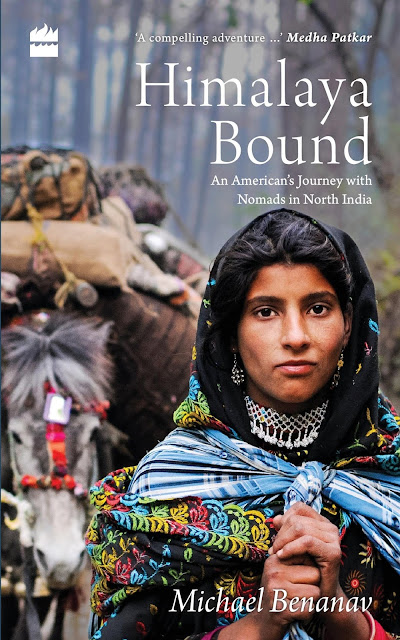 My article Nomads: An endangered species?, a review of Himalaya Bound, an American's Journey with Nomads in North India, written by Michael Benanav and published by Harper Collins, appeared in the Agenda section of The Sunday Pioneer

The book of Michael Benanav, Himalaya Bound: An American’s Journey with Nomads in North India, touches a chord. Not just because I, like most humans, still carry nomad’s DNA, but also because it deals with a much deeper issue: The struggle of our ‘modern world’ vs a more traditional way of life. The author, a writer and photographer, perhaps witnessed one of the last journeys of an endearing itinerant Himalayan community.
During the summer season, Benanav follows a nomadic family, belonging to a tribe known as the Van Gujjars. At a time when it is fashionable to speak of climate change, stake-holders and local empowerment, this tribe is truly an endangered species. Van (forest in Hindi) Gujjars are a forest-dwelling tribe, who migrate every spring to higher grazing grounds. The peaceful vegetarian Muslim community has for generations survived on the milk-products of their buffalos. During 42 days, Benanav documented the tribulations of ‘his’ family, who migrate from their forest in the Shivalik range of Uttar Pradesh to the heights of the Govind National Park in Uttarkashi district of Uttarakhand.

Reading Benanav’s account, one soon realises that these nomads are endangered, simply perhaps the ‘modern world’ does not like nomads, whether they lived in Uttarakhand, Tibet or elsewhere in the world. It is indeed easier for a ‘modern’ State to deal with sedentary populations, rather than ‘nomads’: This is the tragedy underlying the narrative. In recent years, the most serious predicament facing this Muslim family, led by Dhumman, the patriarch, has been Uttarakhand’s Forest Department, who repeatedly threatens to block the nomadic families, whose ancestral summer meadows fall within the National Park, from entering the area. The Indian law is strict, nobody is allowed to live or settle in a National Park; as a rule, it is fair, except that it comes into conflict with the ancestral practices of the Van Gujjars.

The book is the riveting story of a family stuck between the Park’s environmental regulations and the unyielding (and sometimes corrupt) babus, manning the ‘gates’ to the higher pastures. The author describes his journey and gives “an intimate picture of the hopes, fears, hardships and joys of people who wonder if there’s still a place for them on this planet.” In 2009, with his friends, Benanav lives difficult moments, as the family was not permitted to reach their traditional pastures and had no choice but to settle in a new place, higher in the Himalayas. In his Epilogue, Benanav notes that the following year (by then, he returned to the United States), the Forest Department once again banned the Van Gujjars and their buffaloes from the meadows of the National Park. Dhumman faced a familiar and difficult dilemma: “My friends had little faith that the gates to Govind would swing open at the last minute, and they were not eager to endure the kind of tension they’d experienced on the road last time, waiting and praying for mercy from those in positions of power.” They decided to not even try to go to the high meadows. Dhumman arranged with a farmer near Kalsi, “at the edge of the plains, where the Yamuna River emerges from the mountains — to stay near his fields from April through September.” Though at the last minute, Uttarakhand’s Chief Minister ordered the Forest Department to let the Gujjars into the Park; it was too late, the Dhumman family had to stay in Kalsi, despite the ‘unbearable heat’ for the humans and the buffaloes.

Eventually they returned to their traditional meadows in 2011 though they were told by the ‘authorities’ that the permission was not official, but on humanitarian ground only. The following years, the forest officials agreed to close their eyes, but the Gujjars are aware that their years of transhumance are counted. They certainly could be offered a hefty compensation, with a concrete house, to live in a village; the Forest Rights Act provides for such a scheme for forest-dwellers, but they are not interested. As the book was going to the press, the nomads were informed that “no decision had been made to block the nomads in 2015, neither would the forest department officially issue their seasonal grazing permits.” The status quo continues.

According to the author, the officials’ attitude toward the Van Gujjars “goes against current conservation trends. Over the past several years, the global conservation community has begun to embrace the possibility that nomadic herders can be important partners in environmental protection projects.” He cites UN reports, which “now support a diverse array of collaborations between tribes and environmentalists.” Benanav’s account raises larger issues than the ones faced by ‘his’ family. Tibetan nomads too have been facing tough Government policies; Beijing has decided that the nomads were over-grazing eco-sensitive areas on the plateau and should therefore be forcefully ‘settled’ in newly-built villages. As Human Right Watch explained: “Since 2006, the Chinese Government has implemented large-scale programs to ‘rehouse’ …under a policy called Comfortable Housing.” As a result, Beijing “has accelerated the relocation and sedentarisation of nomadic herders in the eastern part of the Tibetan plateau, …and laid the round for similar policies [elsewhere].” In Tibet, the nomadic populations do not have the choice to refuse the ‘welfare’ measures from the Chinese Government.

When Benanav spoke about ‘resettlement’ with his friends, they wholeheartedly rejected the idea of leaving the forest: “They would lose virtually everything in their lives, including their buffalo herds, their intimate connection to the natural world, their sense of freedom, even their sense of themselves,  …the forest is the only thing [they] know.” Dhumman told his American guest: ‘We are part of it and it is part of us. It’s where we belong. … whenever I had to spend more than a few hours in a town, I would inevitably begin to feel sick.” I still remember my first visit in these remote areas more than 40 years ago. Travelling by bus on the Himalayan roads, one would often be stopped on our journey by Gujjars and their large herds (often sheep), I always wondered, from where are coming, where are they going? It is rare today to be blocked on these mountain roads: It simply means that such nomadic life is steadily disappearing. I feel that it is a great loss for humankind. But there is another aspect to the migration, which has serious strategic implications for India.

The entire Himalayan belt is getting depopulated; the villages in the high valleys are fast getting empty of their inhabitants. It is true for the border villages in Ladakh, but also in Uttarakhand or in Arunachal Pradesh; one of the ‘strategic’ consequences is that it has opened the door to Chinese incursions. A leading daily recently reported the case of Niti, the last Indian village, near Joshimath, a few km away from the Tibet border: “Years ago, it was a thriving village of about 250 families. Now, only 35 remain,” wrote the newspaper, adding: “As villages along the international border in Uttarakhand face out-migration on an unprecedented scale, uninhabited areas lie open to territorial claims by the Chinese... At Niti, villagers said life was hard, and many more could migrate. The State Government seldom heard pleas for better facilities.”There are many such examples. If Benanav’s book can bring some awareness about the Himalayan ‘migrations’, he would have rendered a great service to both our border people and the nomadic tribes.
Posted by Claude Arpi at 10:43 AM