The sorry state of India’s Borders

Sometimes, though it is rare, one reads some good news in the national press. One of these refreshing items, for me at least, was the visit of the Minister of State for Home Affairs, Kiren Rijiju, to the Indo-Tibetan Border Police (ITBP) posts in Gunji and Kalapani of Pithoragarh District of Uttarakhand.


Another Rediff interview with Kiren Rijiju

According to Sushil Kumar, the District Magistrate, Rijiju went “to take stock of the defence infrastructure in these border areas.”
The young dynamic minister from Arunachal spent a night at Nabhidhang rest house, on the way to Lipulekh-la, no very far from the trijunction between India, Tibet and Nepal.
He is said to have walked the last eight kms from Kalapani to Nabhidhang to reach the last ITBP border post.
And guess what the minister discovered?
A ‘peculiar security concern’, said the local press.
Indian telecom services are not available in these remote areas; as a result, local villagers have to use Nepali SIM cards. Isn’t it shocking?
Rijiju said: “Villagers in this region walk for five days to reach a road. After Dharchula, only Nepal SIM cards work.”
He told The Indian Express: “It’s a shame that in 68 years of independence, we have not been able to provide over 20,000 villagers in this region with roads, electricity and telecommunication. People, including our jawans, use SIM cards bought from Nepal as Indian telecom signals do not reach here. There is no tower in the entire region.”
On his return to the capital, the minister wrote to his colleagues in the Department of Telecom and the Ministry of Defence asking them to immediately remedy this vital lacuna.
This raises several issues.
First, it is not a new phenomenon. Several years ago, I was told by a politician from Arunachal, who had earlier served as a minister, that when he went abroad and he received calls from Tawang, to his surprise, the identification number showed the Chinese ISD code: it meant that calls originating from Tawang were transiting via China. That was long ago, but the situation on the borders does not seem to have improved much.
Then, Rijiju was the first Union minister to visit these areas. Why? It is simply too far from Delhi’s comfort.
Further, Nabhidhang is not an ordinary border post: it is on the track followed by the MEA Yatra to Kasilash-Mansarovar and one of the 3 official landports (with Nathu-la and Shilpi-la) between India and China.
I would be curious to know how many times the Pithoragargh DM has visited this area. Usually, once in a tenure is enough; local officials prefer to dream of a posting in Dehradun.
A larger, but closely linked issue is the migration of populations from India’s frontiers.
A few weeks ago, The Times of India (TOI) reported from Dehradun: “As villages along the international border in Uttarakhand face out-migration on an unprecedented scale, uninhabited areas lie open to territorial claims by the Chinese.”
The journalist studied the case of Niti, the last Indian village, located 26 km south from the Niti pass, which demarcates the border between Tibet and India. For centuries, the village, situated at an altitude of 3,600 metres, saw traders, pilgrims and officials freely moving between the two countries and the area flourished. Unfortunately, all this stopped in 1962; today only 35 families remain in the village; a few decades ago, there were 250.
Trade with Tibet (today China) is dead and the area is virtually closed to outsiders; an Inner Line Permit is not easy to obtain from the local authorities.
Located 88 km from Joshimath, though the village could have been developed into an eco-tourism centre, it was not done. Even amongst the remaining 35 families, most of the young people have moved to the plains in search of a better life.
The Chinese have no qualms to develop their side of the Himalayan range and while Beijing has taken great leaps forward to built its border infrastructure, Delhi has worked at snail’s speed, struggling to create a semblance of infrastructure; migration is the direct outcome of this slow pace.
On the same subject, The Tribune quotes Dr Shamsher Singh Bisht, a social activist: “The rate of migration has increased after June 2013 as most of the people who lost their homes but received compensation preferred to relocate in safer plains.”
Dr Anil Joshi, a ‘gaon bachao’ advocate explains: “Over 3,000 villages in the hills have been abandoned due to policies of the respective state governments which kept neglecting villages when it came to development policies. …A silent migration from rural Uttarakhand is on.” 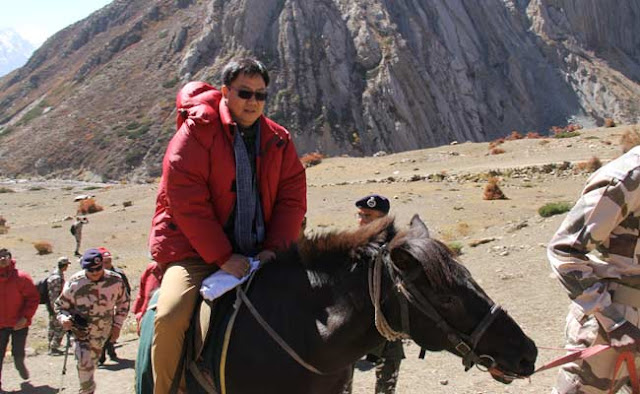 The 2011 census says that 1,065 villages of the state have been deserted.
Why should a farmer or a pastoralist, living in a remote village of Uttarakhand or near the LAC in Ladakh, remain in his native village when he can earn a decent living by running a small hotel in Dehradun or driving a taxi in Leh.
In one of his monthly radio programs, Maan ki Baat, Prime Minister Modi had announced that he was “deputing Central Government officials to find solutions to problems being faced by the region”. The Ministry of Development of the North-Eastern Region was to send officials to hold week-long camps. The outcome has never been made public.
Remember Verrier Elwin’s A Philosophy for NEFA, so dear to Nehru! Based on French philosopher Jean-Jacques Rousseau’s theory: “Nothing is so gentle as man in his primitive state, when placed by nature at an equal distance from the stupidity of brutes and the fatal enlightenment of civil man,” the romantic view of the tribal folks ultimately amounted to the segregation of a large chunk of the Indian population and a total lack of development of these strategically important regions.
One of the decisions taken by Modi Sarkar has been to modify the guidelines of the Border Area Development Programme (BADP) drafted some 10 years ago. The BADP is a 100 per cent centrally funded scheme covering in priority all Indian villages located within 10 km of the International Border.
The sucess is doubtful, because despite good intentions, how will the project be implemented on the ground, and crucially how soon?
Another issue is the stagnating petty trade between India and Tibet. Though border trade could have been a way to stop migration, the local babus are not really motivated, while China is not interested to reopen the traditional passes.
The serious strategic implication of the depopulation of the entire Himalayan belt is that it has opened wide the door to Chinese incursions.
Take the Barahoti grazing ground in Chamoli district; it was the first area claimed by China as ‘theirs’ in 1954. If there are no Indian grazers to go up with their herds at the beginning of the summer season, the Chinese are quick to send their own to ‘mark’ China’s presence. Recently, Indian district officials had to be sent for a few weeks to ‘stamp India’s presence’ as hardly any grazer from Niti is interested anymore.
Who in Delhi realizes that in case of a conflict, the ‘local’ population will play a crucial role?
Though Mr Modi’s initiative to send officers to the spot is certainly a great improvement in the right direction; a special ‘border’ cadre could also help reverse the tide.
Will Rijiju’s trip be followed by the visit of his colleagues of Defence (who obviously prefers the beaches of Goa for his weekends), Telecom or Road Transport ministries to India’s frontiers?
This would be a boon for the borders of India, but it may not happen.
Posted by Claude Arpi at 6:51 AM