The Communist website chinanews.com announced: 'Tibet Sets up Night Schools for Monba [Monpa] Ethnic Group’.
It quotes the local authorities in Cona [Tsona] county of Lhoka prefecture, who said that “night schools [will] offer courses on cultural knowledge every Friday, which greatly enhanced the literacy level of the locals.”
The report refers to an area, north of Tawang district of Arunachal Pradesh (close to the McMahon line). The last Indian post is located at Khenzimane and the first Tibetan village (mentioned in the article) is Lebu, both villages on the western bank of the Nyamjang chu (river).
The article explains that the Monpa “ethnic group is one of the 56 ethnic groups in China with a population of 50,000. Most of the Monpas live in Tibet’s Lhoka and Nyingchi Prefecture [of Tibet].”
The website does not mention the Monpas living in Tawang district in India.
It however admits that while “the living condition of Monpas has risen considerably due to the development policy for minorities, [however] trapped by the bad traffic and communication [sic], the literacy rate is a little low.”
What is amazing is that this admission comes at time when China speaks of a ‘huge dispute’ with India over Arunachal Pradesh and that it is an ‘undeniable fact’.
The sharp tongue of Hua Chunying, China’s foreign ministry spokesperson recently asserted: “There is a huge dispute in the eastern China-India border. This is an undeniable fact. …China always holds a consistent and clear position on the boundary question. The two sides should make joint efforts to maintain peace tranquility of the border area and create favourable conditions for the negotiation of the boundary question."
Though China continues to claim Arunachal Pradesh as an 'undeniable' part of Tibet (and China), it is surprising that local Communist cadres in the border of Arunachal admit ‘low rate of the literacy’ amongst the Monpas.
Wang Weixi, the director of a police station in Lebu Township [village?] of Tsona county told chinanews.com that “the night school established by the police station has made great use of the human resources and facilities. The officers will open courses to promote legal knowledge in the residents’ leisure time.”
What ‘legal knowledge’ is Wang speaking about?
Is the course on the 1962 War (Lebu village is located a few kilometers away from the Thagla ridge, which saw the first Chinese attack on October 20, 1962)?
Does Wang mean ‘political’ literacy?
In what do the Monpas need to be ‘legally educated’?
At the same time, the White Paper 'on the development path of Tibet', praises China for Tibet's progresses in every fields, especially in education: 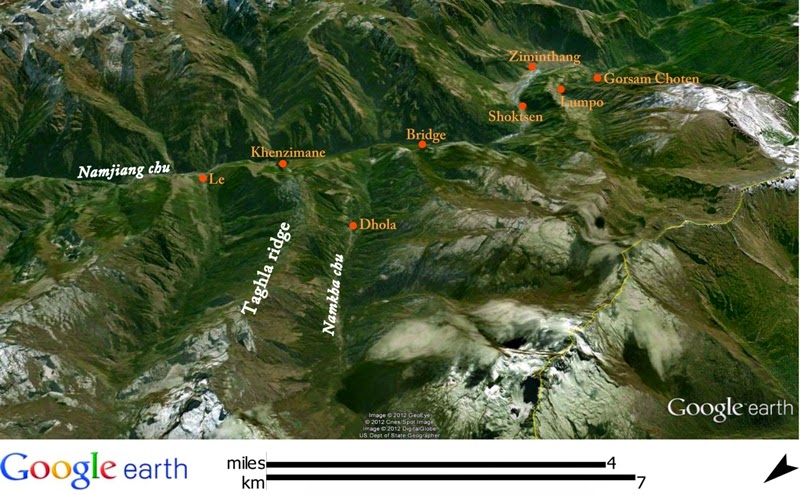 Illiteracy has been eradicated elsewhere in Tibet, but not for the Monpas?
Why do they need ‘legal knowledge’?
According to chinanews.com, Richen, a 27-year-old Monpa youth, knows little about legal knowledge. He is quoted as saying that after the training at the night school, he learns about basic legal knowledge.
The website adds: “A small library was built in Lebu Township in 2013. It opens to public every Saturday. More and more local people borrow books from the library and most of them form reading habits.”
Could the Monpas tempted to cross over to India, therefore the need to be 'legally educated?
It could be one of the reasons behind the Friday night's classes at Lebu Police Station.
Posted by Claude Arpi at 11:15 AM