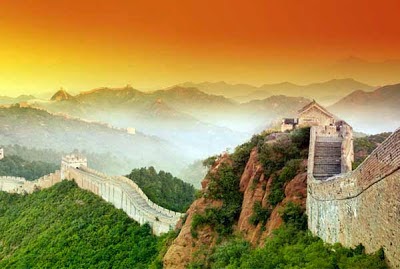 Concluding the recently published 'White Paper on Tibet', Beijing argues that “the only sensible alternative is for the Dalai Lama and his supporters to accept that Tibet has been part of China since antiquity”.
It says:


The wheels of history roll forward and the tides of the times are irresistible.
Tibet's path of development is one imposed by history and chosen by the people. Experience proves to us that only by upholding unity and opposing separatism, only by upholding progress and opposing retrogression, only by upholding stability and opposing turmoil, can the future of Tibet be assured. Any person or force that attempts to resist the tide will simply be cast aside by history and by the people.
The 'middle way' advocated by the Dalai Lama and his supporters, with 'Tibetan independence' as their ultimate goal, is just such an attempt. It places itself in opposition to the prevailing realities of the nation and in Tibet. It contravenes China's Constitution and its state systems. The only sensible alternative is for the Dalai Lama and his supporters to accept that Tibet has been part of China since antiquity, to abandon their goals of dividing China and seeking independence for Tibet, and to begin to act in the interests of Tibet and the country at large.
The future of Tibet belongs to all the peoples of Tibet and to China as a nation. Tibet has every prospect of a brighter future. In the years to come, the people of every ethnic group in Tibet, along with others in the greater family of the motherland, will progress on the path of socialism with Chinese characteristics, striving to build a new, united and democratic Tibet, to celebrate the brilliance of its culture, to develop a prosperous, harmonious socialist society, and to join with their fellow Chinese in accomplishing the Chinese Dream of the great renewal of the nation.

For the sake of argument, let us accept the Chinese contention.
This however raises a question: what is China?
A few years ago, Professor Ge Jianxiong, Director of the Institute of Chinese Historical Geography at Fudan University in Shanghai stated in an article in The China Review: “It would be a defiance of history to claim that Tibet has always been a part of China since the Tang Dynasty (7th to 10th century).”
But Professor Ge went further and questioned the notion of ‘China’.


When discussing the peaceful rise of China and the history of the great powers of the world, it is natural to think of ancient China. Can ancient China be considered a ‘Great Power’? If so, how big was it? This is a prerequisite for knowing the history and comparing development. But up to now, people have held on to a few misunderstandings.


First of all, ‘China’ (Zhongguo) only officially became the name of our country with the founding of the Republic of China in 1912. Before this, the idea of China (‘Zhongguo’) was not clearly conceptualized. The concept of ‘China’ has continued to expand. From referring specifically to the central plains of China, the concept has since grown to now refer generally to a whole nation. Even during the late Qing, ‘China’ would sometimes be used as a name to refer to the Qing State, including all the territory within the boundaries of the Qing Empire, but other times it would only refer to the ‘18 Interior Provinces’ and not include Manchuria, Inner Mongolia, Tibet, and Xinjiang. Therefore, if we want to understand the extent of ancient China’s territory, we can only speak of how large was the actual territory controlled by a particular dynasty at a particular moment.

Prof. Ge then gives Tibet as an example:

If we ask: How big was 8th century China and if we speak about the borders of the Tang Dynasty, we cannot include the Qinghai-Tibetan Plateau. This was ruled by Tubo/Tufan (吐蕃), and so does not count. Tubo/Tufan was a sovereignty independent of the Tang Dynasty. At least it was not administered by the Tang Dynasty. Otherwise, there would have been no need for Tang Taizong to marry Princess Wencheng to the Tibetan king; there would have been no need to erect the Tang-Tubo/Tufan alliance tablet. It would be a defiance of history if we claim that since the Tang Dynasty, Tibet has always been a part of China – the fact that the Qinghai-Tibetan Plateau subsequently became a part of the Chinese dynasties does not substantiate such a claim. Of course, to look back from the perspective of contemporary borders, China’s current territory contains many areas that, from the perspective of 8th century political control, were independent of the authority of the Tang court including Tuobo/Tufan, Nanzhao [in Yunnan], and Bohai.


Second, it goes without saying that since the different dynasties lasted both a long time and a short time, it also goes without saying their territory similarly fluctuated. This is especially so of those dynasties that greatly expanded the scope of their borders from the beginning to the end of their rule, the territory under their control could vary considerably over time. Take for example the Western Han. In the beginning, their western border extended to the Hexi/Gansu corridor. Later, it expanded to Lake Balkhash only to then shrink back to the Yumen Pass in the latter years of the dynasty. In the early years [of the Han] the southern boundaries reached only as far as the Southern Ling Mountains. Even what is now Guangxi and Guangdong was under the control of the Nan Yue. Yet by the middle and later periods, control in the south extended as far as what is today Vietnam.
After Tang Taizong defeated the Eastern Turks, the northern reaches of the Tang Empire extended all the way to the area around Lake Baikal. But when the Turks later regrouped, Tang control retreated to the Yinshan Mountains (in today’s Mongolia). Up to the reign of the Yongzheng Emperor during the Qing Dynasty, China’s borders did not include Xinjiang and it was not until the middle of the 18th century that the Qianlong Emperor was able to pacify the regions to the north and south of Tian Shan and extend Qing territory as far as Lake Balkhash and the Pamir Plateau. However, beginning around 1860, the northern reaches of Heilongjiang, the area east of the Ussuri River, and the northwest part of what is today Xinjiang—over 1,000,000 square kilometers of territory—was seized by Russia. In the 20th century, China for all practical purposes lost 1,500,000 square kilometers of territory that is Outer Mongolia.

In other words, the borders of the empire have fluctuated during the successive dynasties and with the rule of a particular dynasty.
Prof Ge provides some other examples, especially about the degree of 'control' a particular dynasty exercises over a territory:


Moreover, we must differentiate between territory that was actually under administrative control of a dynasty, that which was a vassal state, and that which was ‘within the reaches of our prestige’. [Within a dynasty’s sphere of influence?] For example, take the later stages of the Western Han. Even though the leader of the Xiongnu surrendered to the Western Han, Han Wudi was not able to incorporate the Xiongnu into the Han Empire. Moreover, he had to pay off the leader of the Xiongnu in order to have a guarantee that there would be not attacks across a border marked by the Great Wall. As a result, the borders of the Han Empire did not extend beyond the Yin Mountains and the Xiongnu were never a part of Han territory.
In another example, several times the children and grandchildren of Ghengis Khan marched westward, their cavalry sweeping over Asia and Europe. But by the time that Ghengis’ grandson, Khubilai, established the Yuan Dynasty, Ghengis’ other descendants had already split apart his empire, after which they became known as the Four Khanates. These other Khanates and the Yuan court were independent political entities, only that their rulers had the same ancestors. The borders of the Yuan Empire did not include parts of Xinjiang and the southern territory belonged to another Khanate, never mind Central Asia, Western Asia, and Europe.
Another example is Vietnam, the larger part of which was under the administrative control of the Han and Tang Dynasties. But beginning in the 10th century, Vietnam founded its own independent kingdom, after which, during the Song, Yuan, Ming, and Qing dynasties, it was a vassal state. Of course, this is not the same as complete independence, therefore before France made Vietnam a French colony, France had to force the Qing government to relinquish its sovereignty and claims over Vietnam. Nevertheless, we are not able–at least after the 10th century—to regard Vietnam as a part of ‘China’. Korea, the Ryukyu Islands, Burma are also in a similar category.


Now, what of the countries of South East Asia and Japan that have never officially been the vassals of any dynasty? Chinese history books call them ‘Tributary States’. Actually, it was either international trade under the ‘tribute’ banner or else it was only temporary visits. Most of what the books call ‘Tributary States’ are like this. What is more, we have only the one-sided views of the Qing court records that were based on past precedents and written for the court’s own aggrandizement. For example, people also called Russia, France, Portugal, and the ‘Red Hairs’ as tribute states. (During the Ming, Dutch people were called ‘Red Hair Foreigners’. After the mid-Qing they also called the English, ‘Red Hair Foreigners’) Can we possibly accept that these states were also vassals of the Qing?
Until now, there are those people who feel that the more they exaggerate the territory of historical ‘China’ or China’s successive dynasties and kingdoms the more patriotic they are. Actually, it is exactly the opposite. If China really wishes to rise peacefully, we must understand the true facts of history, only then will we be able to know the sum of our history, learn from our experiences, and so be on a solid footing to face the future.

What to conclude of all this?
To accept that Tibet has been part of China since antiquity, is not a sensible alternative is for the Tibetans, simply because 'China' was then not existing as the new Emperors would like it to exist today.
The only alternative seems to me that the present leadership in Beijing should do their homework and start studying the history of their 'empire', before asking the Tibetans to sign on a dotted line.
They maybe be able to realize that sooner or later, the 'Communist Dynasty' will also collapse; then, the Middle Kingdom will shrink again behind the Great Wall.
Posted by Claude Arpi at 7:15 AM