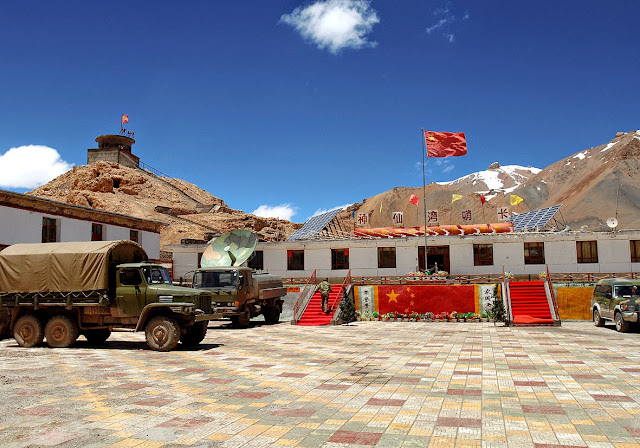 The recent heavy traffic of VIPs/VVIPs in Ngari (Western Tibet)  was not only due to the presence of the Dalai Lama in Ladakh.
It has also to do with Beijing's decision to consolidate its borders, whether there are sea borders in the South China Sea or land borders with India (mainly in Aksai Chin region).
Yesterday, China Military Online reported that Xu Qiliang, a member of the Politburo of the CCP's Central Committee and also one of the 2 vice chairmen of the  Central Military Commission (CMC) inspected Xinjiang and Tibet garrisons.
According to the official website: "Xu Qiliang recently [when is not disclosed] inspected the troops of the People’s Liberation Army (PLA) and the People’s Armed Police Force (PAPF) garrisoning Xinjiang and Tibet."
The article adds: "During the inspection, General Xu Qiliang visited the officers and men in frontier areas, and held talks with the leaders of the troop units garrisoning in Hotan [Xinjiang, near the Aksai Chin], Ali [Ngari or Gar] and Lhasa [in the Tibetan Autonomous Region or TAR] areas to discuss the development and reform of frontier troop units.
This means that General Xu inspected troops belonging to 2 separate Military Area Commands (Lanzhou and Changdu).
Xu Qiliang also visited sentries of the Shenxianwan (just north of the Karakoram Pass and the Depsang Plains) frontier defense company who were performing duties at the altitude of 5,380 meters.
Xu Qiliang went to the barracks of the Khurnak Fort frontier (opposite the Indian troops in Ladakh, north of the Panggong tso) defense company and Banmozhang (near Sirijp on the Panggong Lake where many incursions have taken place) to inspect a water [speed-boats] squadron and inquire about the soldiers’ work, study and life.
According to the same source: "Xu Qiliang also inspected weaponry and equipment and observed training and drills in a training base of a 'Red Army' regiment of the Xinjiang Military Area Command (MAC), an infantry brigade of the Tibet Military Command (TMC) and the First Detachment of the Tibet Contingent of the People's Armed Police Force (PAPF)."
He was accompanied by a battery of generals, amongst them, Gen. Sun Jianguo, deputy chief of general staff of the PLA, Gen. Miao Hua, political commissar of the Lanzhou MAC and Gen. Zhu Fuxi, political commissar of the Chengdu MAC.
This visit is also probably linked to the arrival of the railway line in Shigatse.
Another official Chinese site announced a few days ago that the completion of an extension of the world's highest Qinghai-Tibet railway, Lhasa-Shigatse railway. The construction started on September 26, 2010 will be officially opened in August.
Test trains are already running on the newly-built line, which will have an overall length of 253 km; trains will be able to run at a speed of 120 km per hour. It will take only 2 hours from Lhasa to Shigatse, the seat of the Panchen Lamas' and the TAR's second largest city.
China Tibet Online says that the city already attracts thousands of pilgrims and visitors each year: "In recent years, Panchen Lama's palace, Tashihunpo Monastery in Shigatse has received over 200,000 visitors from home and abroad annually. The opening of Lhasa-Shigatse railway will surely make the journey of worshippers to Tashihunpo Monastery safer and easier."
The first train reached Lhasa in July 2006, and though Beijing says: "it has positively impacted on Tibet's tourism, hospitality and manufacturing sectors", the main beneficiary has been the PLA.
The new line will be another progress for the PLA and PAPF stationed on Western Tibet.
To come back to General Xu's visit, did he come to distribute new accurate maps to the troops?
A Chinese military site recently reported: "A batch of new-version paper-made battle maps with a scale of 1:50,000 obtained by a motorized infantry brigade under the Lanzhou Military Area Command (MAC) of the Chinese People’s Liberation Army (PLA) from a measuring and mapping information center under the PLA Lanzhou MAC were quickly transferred to the frontline troop units participating in the trans-regional base training on the morning of July 9, 2014, marking that the distribution of a total of over 15 million new-version paper-made battle maps to the troop units under the Lanzhou MAC has been completed."
The website added: "This is the first time for the PLA to completely update a single type of map in the past 30 years."
Now the time is ready for Beijing to exchange maps of its 'perceived borders' with Delhi, something it has refused to do till today.