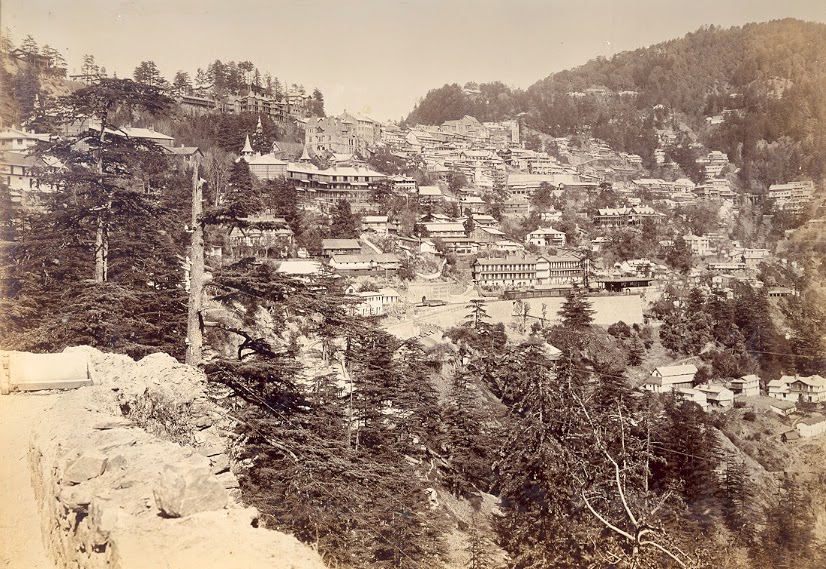 I am posting here an article written 10 years ago about the tripartite Simla Conference.
"The Simla Convention: Ninety Years Later" was the chapter of a book Colonial India: a Centenary Tribute to Prof. K.K. Datta, edited by Prof. Surendra Gopal (Veer Kunwar Singh University, Arrah, 2006).
The Convention between the Great Britain and Tibet signed on September 7 1904 in Lhasa mentions the opening Trade Agencies in Tibet.
Article 2 says:


The Thibetan Government undertakes to open forthwith trade mart: to which all British and Thibetan subjects shall have free right of access at Gyantse and Gartok, as well as at Yatung.
The Regulations applicable to the trade mart at Yatung, under the Anglo Chinese Agreement of 1893, shall, subject to such amendments as may have after be agreed up on by common consent between the British and Thibetan Governments, apply to the marts above mentioned.
In addition to establishing trade marts at the places mentioned, the Thibetan Government undertakes to place no restrictions on the trade by existing routes, and to consider the question of establishing fresh trade marts under similar conditions if development of trade requires it.

The Anglo Tibetan Trade Regulations signed on July 1914 in Simla inter-alia confirmed the existence of these Trade Agencies.
The Panchsheel Agreement was supposed to be re-confirmation of the 1914, this time with a new regime in Beijing.
It was not to be, the Trade Agencies were harassed and progressively closed.
An article quoting me appeared a couple of days ago in The Daily Mirror.
The title says it all: Celebrate the Panchsheel Agreement? It was one of India's worst political disasters.
Read it: a sad story!

Here is my article:
There is a prevalent custom in Asia: let’s first have a cup of tea.
Colonel Younghusband  had the customary cup when he visited the Tibetan camp at Guru near the Chumbi Valley in 1904 . A couple of days later, he officially received his Tibetan counterpart, General Lhading at his camp in Tuna. Then, despite the courteous offering of scarves, tea and refreshments, a battle started between the troops of Younghusband and Lhading. The Tibetans were crushed; they were no match for the British troops equipped with the most modern weapons.
The Choegyal of Sikkim, a relative of Lhading had warned the Tibetan General: “For the Tibetan army to challenge the British was like throwing an egg against the rock - the egg could only be smashed.”
After this easy victory, Younghusband continued towards Lhasa, the Tibetan capital. Lord Curzon, his boss, had instructed him to ‘start negotiations’ with the Tibetan authorities. For years, the Lhasa government had refused to even open the letters of His Gracious Majesty’s Government. This was extremely irritating for an all-powerful Viceroy and his officials.
An Englishman later wrote: “In 1903 the position of Britain and Tibet, was like that of a big boy at school who is tormented by an impertinent youngster. He bears it for sometime, but at last is compelled to administer chastisement.”
Younghusband himself described the situation before the battle:
There was no possible reasoning with such people. They had such overweening confidence in the Lama’s powers. How could anyone dare to resist the orders of the Great Lama? Surely lightning would descend from heaven or the earth open up and destroy anyone who had such temerity!  I pointed to our troops, now ready deployed for action. I said we have tried for fourteen years inside our frontier to settle matters. …For eight months now I had patiently tried to negotiate, but no one with authority came to see me, my letters were returned, and even messages were refused.”
The conflict had some unexpected consequences.
Perhaps even more than the bullets of the ‘British devils’ and the outcome of the battle, another factor flabbergasted the Tibetans. Soon after the end of the hostilities, some British officers visited the battlefield, and instead of killing those still alive, the ‘devils with long noses’ ordered their troops to take them to their field hospital. This was an incredible gesture for the Tibetans used to fighting wars on their eastern front with Chinese warlords where no prisoner was ever taken leave aside caring for the wounded. This incident, along with the fact that Younghusband paid well for whatever food or fodder he requisitioned on his way to Gyantse, made the Tibetans change their mind about the British; this change of attitude played an important role in future ‘negotiations’. For the first time after centuries of isolation, Tibet was forced to enter into contact with the Western world.

Download the article by clicking here...
Posted by Claude Arpi at 10:35 AM