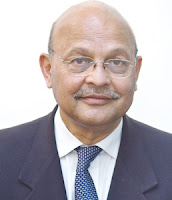 My dear friend Bharat Verma is no more.
He left us yesterday morning.
I am republishing an interview which appeared in Sify.com in 2009.

Here is the original link...

Fault Lines is the title of the latest book by Capt. Bharat Verma, the outspoken editor of The Indian Defence Review, the country's most prestigious defence publication.

The book, a collection of the Review's editorial pieces, demonstrates the depth and consistency of his vision over the last decade.

At a time when very few in the country think of India as a unified whole, and vote banks are the only preoccupation of politicians, Capt. Verma speaks to Claude Arpi about the fault lines, not only in the defence sector but also in the nation's psyche. Excerpts:

Could you explain what the fault lines you have discussed in your book are?

It is said that a long time back, a king with an excellent military machine at his disposal could not stomach the violence involved in winning wars. So he renounced war. This led to the rise of the pacifist philosophies, which created an 'extreme'-where the state either refused to defend itself or neglected the instruments that could defend it.

Pacifist philosophies may be good for the individual's soul, but are suicidal for the nation's security.

Any 'extreme' is dangerous, as it tends to create imbalance in statecraft. We saw that in the unjust unilateral aggression in Iraq. It diminished the American aura.

Pakistan's over-aggressive agenda in the name of jihad haunts it now to the point of fragmentation of the state.

China's compulsory one-child policy seems to be landing it in an extreme position where it will have 15 million young males who cannot find brides. This unnatural tilt in the male population could lead to war with its neighbours!

Similarly, pacifism is the other extreme. If it infects policymaking, then 26/11s will occur on a regular basis. Or a 'Tibet' will happen.

Would you say there is ONE original fault line [the Partition based on a faulty two-nation theory]?

Any thought process with an extreme edge would naturally create multiple fault lines in the subsystems of governance. Therefore, the creation of Pakistan based on an acute purity of thought process, vis-à-vis excessive pacifism of multi-cultural India, is contradictory. Such 'extremes' generate wars.

Armed with an aggressive Wahabi philosophy, Pakistan wants to destabilise a pacifist India. The latter's instruments of state-steeped in pacifism-are unable to rise to its defence!

Have you heard anything about defence matters during the present electoral campaign? If not, is it not worrying?

Mostly, it is in general terms and at a low tactical level of the spectrum. Of course, everyone promises to fight terrorism. But on the night of 26/11, if Home Affairs did not know that it could immediately request the military to activate the regular infantry battalion and the marine commandos stationed in Mumbai, then it is obvious nobody had done their homework in New Delhi!

So without a concrete road map, I doubt these leaders are capable of waging a war against terrorism. It's pure rhetoric meant for the consumption of the voter.

Similarly, exempting income tax of the defence forces or implementing one-rank-one-pension is merely vote bank politics. It does not generate a road map for securing the nation. Frankly, there are just two issues in front of the nation that need attention-the first is development and the second is security. All-round development will generate wealth that is required to be secure. The rest is peripheral!

There is an urgency to particularly ensure rapid development of states located on the international borders. Otherwise, the external actors will continue to undermine citizens' loyalty to the state with ease.

Where is 'India as a whole' in the current election campaign?

India is under major transition on two counts. First, the 'have-nots' are rising. They have been denied their fair portion of the pie for too long. Therefore, there is a major social churning taking place.

They are now fighting their way up-because the system, out of prejudices and lethargy, did not allow them space to grow. This will create a lot of turmoil and political fragmentation in the days ahead, if not handled intelligently!

Second, the change of generation taking place will witness an assertive India from 2012 onwards. The new generation is focused, self-assured, has better vision than the waffling elders of yore and is determined to see India as a strong country.

The first factor will dominate these elections and we will continue to see a fair amount of turmoil till 2012. I think as the national pie gets enlarged in years to come, social harmony will reappear.

Just take a look at America-it provides a great environment for working people. That environment propelled the Indian community to become the highest revenue earners in the United States. Such is the individual genius when given the right environment. China is scared of this Indian talent and has been trying to sabotage it with the help of its proxies!

The magic word for India, therefore, is 'governance'. If New Delhi can offer merely an average stable and secure governance for the next 10 years, India's success story will be unstoppable. In such an eventuality, India will emerge as the most influential power in Asia by 2020!

How do you see the evolution of defence preparedness over the last 10 years? Are you optimistic?

Honestly, we are in poor shape. Portions of meagre budgets that are provided are being returned to the treasury unspent every year because of cumbersome procurement procedures. The huge shortage of officers in the army is breaking down the bonding between the soldier and the officer. This, in turn, is impacting the discipline adversely and is hurting morale.

The lack of a grand strategy at New Delhi is pushing the battle-winning factor of India into a marshy land of insurgency for decades, with no end game planned. Unless we mainstream the military power by bringing it into the decision-making loop and ensuring lateral induction into the civil to keep the military young, I am afraid we will end up losing a fine war machine. The fault will be entirely ours!

Lateral induction will also help in beefing up the weak civil administration at the same time, with skills they badly need. However, I think the trend of declining military power will be reversed by 2012 with the younger generation taking over the reins of governance.

You said that Fault Lines "analyses the security issues that threaten the territorial integrity of the country due to the unstable neighbourhood", but is it not wrong to always point a finger at the neighbour, when Indian politicians and bureaucrats are not doing their own homework?

In Fault Lines, the first finger that I point is at us. I firmly believe in the Chinese proverb, "If he slaps you once, it's his fault. If he slaps you again, it's your fault!" Primarily, fault lines are highlighted to illustrate how we neglected our well-being and others took or may take advantage of our muddle-headed policies.

I am confident Sun Tzu was pointing to Indian politicians and bureaucrats when he said, "If you know neither the enemy nor yourself, you will succumb in every battle!" The importance of this anthology, however, rests on the ability to pinpoint the inherent pitfalls in the strategy adopted by the various actors. Most of it appears to have come true.

That brings me to the last question. How do you view the new American policy on Afghanistan-Pakistan?

President Obama's effort to lower the social temperatures augurs well for the international community. By increasing the focus on Pakistan (where the battle really lies), rebuilding the relationship with Europe, trying to talk to Iran, increasing communications with Russia and many other countries to tackle serious problems the world faces today displays rare statesmanship.

However, it is not true when the Obama administration says that the United States, India and Pakistan face the same threat. The truth is that Pakistan is the threat that India, America, Europe, Russia and others face.

This is particularly true since the Pakistan Army, its ISI and the jihad factory recruit from the same area-Pakistan's Punjab. They also aim to achieve similar politico-religious objectives. The inter-connectivity with one brother joining the Army and the other the Jihad machine cannot be separated. Therefore, nuclear tipped Radical Islam is more dangerous than Nazi Germany.

The success will depend entirely on how honestly and decisively the world community is willing to address the problem. The problem obviously is Pakistan. Therefore, the next battlefield is Pakistan, too.