Was the Chinese intrusion really a PLA strike against Xi Jinping? 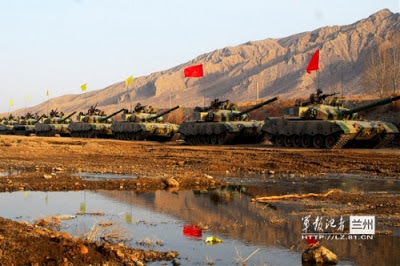 What has China gained from its Daulat Beg Oldi excursion?
Many theories have been propounded: Some say the Chinese leadership wanted to show its displeasure on the new coziness between Delhi [ Images ] and Tokyo. But is it not putting the cart before the horse?
Indeed, such Himalayan happenings are bound to draw the US, Japan [ Images ] and India closer, not the other way around.
What about China's displeasure at the infrastructure that India has been building on its side of the Line of Actual Control? Was it worth this drama? Was it not possible to discuss this issue at the already scheduled ministerial meets?
'Experts' will argue that according to the Art of War, it is the Chinese way to get what they want. This is not certain, because the issue has serious negative collaterals for China.
They may have 'marked their territory' by 'camping' for three weeks in the 'Gateway to Hell,' but they have not earned goodwill from India.
This incident, even if it is 'successfully' solved by both diplomacies, will remain for years a scar in Sino-Indian relations which had just started looking up.
When Chinese scholars visit India, they like to say that both countries should sincerely work on the mutual trust deficit. It is clear the Chinese 'camping' has pushed back for years the earlier progress in closing the 'trust' gap.
Perhaps a more important issue which has escaped the analysts: What about the Chinese Dream?

This is a really insightful article. But I think that the Chinese were really trying to flex some military muscle and show India who's boss.