Is it not strange that Beijing' propaganda material always speaks of 'China's Tibet'.
Look at these two examples found today on the website http://eng.tibet.cn/: 'Jokhang Temple in China's Tibet' and 'Former site of Guge in China's Tibet'.
Such examples could be multiplied.
In India, would anybody write, 'Tanjore in India's Tamil Nadu', 'Jaipur in India's Rajasthan' or Kolkata in India's West Bengal'? At the most, one could write in 'Didi's West Bengal'.
China may not be very sure of its 'ownership' of Tibet.
In the meantime, Agence France-Presse reported from Washington DC that Lobsang Sangay, the leader of Tibet's government-in-exile had declared that he accepted: "the Communist Party's rule in Tibet".
He assured Beijing that "[China] faced no threat to its sovereignty if it eased its grip".
According to AFP, on a visit to Washington, Sangay said that Dharamsala was "not challenging China's sovereignty or territorial integrity" through it wanted a greater autonomy: "What we seek is genuine autonomy as per the framework of the Chinese constitution. ...In short, if the Chinese government implements their own law, we would take that as genuine autonomy. That, we think, is a moderate, reasonable solution which is a win-win proposition both for the Chinese government and the Tibetan people."
What does it means that Dharamsala will "not challenge China's sovereignty or territorial integrity"?
When the Chinese troops entered DBO in Ladakh, Beijing said it was China's territory. Does Mr Sangay is ready to accept China's definition of 'territorial integrity'?
China's claim the entire Arunachal Pradesh as its own territory, does it mean that Dharamsala is ready to accept this position?
Lobsang Sangay's statement has extremely serious implications for India's territorial integrity. He should certainly clarify his position.

Jokhang Temple in China's Tibet
May 10, 2013
China.org.cn,
Jokhang Temple, located on Barkhor Square in Lhasa, is Tibet's first Buddhist temple and is part of the Potala Palace. The temple used to be called Tsulag Khang ("House of Wisdom"), but it is now known as Jokhang ("House of the Buddha"). It is the ultimate pilgrimage destination for Tibetan pilgrims. Built in Tang Dynasty-style architecture, Jokhang Temple is a four-story timber complex. A statue of Sakyamuni at age 10 is one of only three statues designed by Sakyamuni himself. [China.org.cn] 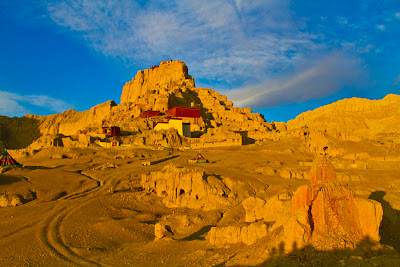