The new boss of Tibet and Xinjiang preaches 'stability'

Yu Zhengsheng, member of the Standing Committee of the CCP's Political Bureau and Chairman of the CPPCC recently undertook an inspection tour in Hotan, Kashgar, Yili and Urumqi of Xinjiang Uygur Autonomous Region. He spent 5 days (from May 23 to 28) in the area.
This demonstrates the importance that the Party attaches to the restive Muslim province.
This tour also tends to prove that Yu Zhengsheng has taken over the Chairmanship of the Xinjiang Work Coordination Small Group which will monitor the Xinjiang Affairs.
A couple of days earlier, Yu had chaired his first Central Tibet Work Coordination Small Group in Beijing.
Yu is therefore the Party's strong man for Tibet, Xinjiang and Taiwan.The exact composition of the Tibet Small Group is not known, though I have mentioned some possible names on this blog.
Apart from the Central Officials, the meeting is said to have been attended by cadres from Gansu, Qinghai, Sichuan and the Tibetan Autonomous Region.
The Party Secretaries from these areas went back to their respective provinces and gave speeches on the importance of Yu’s comments.
From Yu's declarations in Xinjiang, one can guess what Yu told the Party cadres in Beijing: he probably called for greater efforts for improving people's living conditions and promoting ethnic solidarity and social harmony.
He must have emphasized 'social stability'.
In Xinjiang, he also spoke of "effective measures to be put in place to contain the breeding and spreading of religious extremist elements."
On his return to Tibet, Chen Quanguo, the TAR's Party Secretary went for an inspection tour  of the Nagchu Prefecture; he carried Yu’s message to “bring stability and harmony to Nachu".
Unfortunately for Secretary Chen, the day he was returning to Lhasa, thousands of Tibetans gathered in Driru county (Chinese: Biru in Nagchu Prefecture). They met at a sacred Tibetan mountain to demonstrate against the Chinese government's planned mining projects in Driru county.
The Tibet Post reported:


On May 24, 2013, over 1,000 trucks  [probably cars]  loaded more than 5,400 Tibetans from the four major areas, including Pekar, Nagshoe Phudha and Tsala gathered in Dathang town, near the sacred mountain in protest of the growing Chinese mining tensions in the county; said Mr Ngawang Tharpa, an exile Tibetan in Dharamshala, citing contacts in the region. The mountain is called Lhachen Naglha Dzambha, rich in mineral resources and it has the Gyalmo Ngulchu [Salween River] running through its foothills. Sources said the local Tibetans ultimately managed to stop the mining at the holy Mountain.
The current situation is tense in the Driru county, where the local authorities deployed over fifty military convoys to the protest site, according to sources from inside Tibet.

Two protesters Gonp and Abu would have died in a car accident on their way to the site.
According to Radio Free Asia (RFA): "Mining operations in Tibetan regions have led to frequent standoffs with Tibetans who accuse Chinese firms of disrupting sites of spiritual significance and polluting the environment as they extract local wealth.  ...Waste from the mines, in operation since 2005, “has been dumped in the local river, and mining activities have polluted the air,” one source said."
This is bad luck for Mr. Chen who had just come to preach 'stability'.
This is not the first time that such incident has happened.
Last October, two Tibetan cousins Tsepo, 20 and Tenzin, 25, self-immolated in front of a school in Driru.
Local contacts told Tibetans in exile that the cousins shouted slogans calling for freedom in Tibet and the return of Tibet's spiritual leader the Dalai Lama before setting themsevlec alight. They also pleaded for all Tibetans to be "united like brothers”.
RFA commented: "Tibetans in Driru have been in the forefront of opposition to Chinese rule in the Tibet Autonomous Region since deadly riots in the region in 2008, with monks and nuns protesting and abandoning monasteries in order to defy 'intrusive' new Chinese regulations."
At that time, Lobsang Gyaltsen, who since then has become the head of the government in the TAR had stayed 2 weeks in the area to pacify the Tibetans.
The Party's senior cadres' exhortations do not seem to work on the local population.
As I mentioned earlier the resentment against the Chinese administration is extremely strong in the region.
This goes in parallel with the looting of the underground wealth of Tibet. 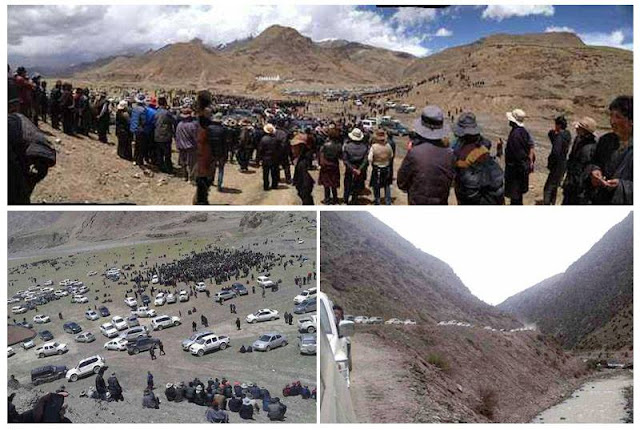 Yu tours Xinjiang, stresses curbing extremism, terrorism
Xinhua
May 29, 2013
URUMQI, May 28 (Xinhua) During his tour of Xinjiang, China's top political advisor stressed containing the growth of religious extremist elements and maintaining a high intensity in the fight against terrorist activities.
The tour took Yu Zhengsheng, chairman of the National Committee of the Chinese People's Political Consultative Conference, to Hotan, Kashgar, Yili and Urumqi in northwest China's Xinjiang Uygur Autonomous Region from May 23-28.
Visiting villages, companies, schools, police stations, a border port and a mosque, Yu called for greater efforts in improving people's living conditions and promoting ethnic solidarity and social harmony.
To facilitate the region's economic and social development and long-term stability, he urged local authorities to fully implement policies that the central authorities have prescribed for Xinjiang.
During the visit, Yu held meetings on safeguarding social stability with local government workers and people from religious circles.
In addition to measures to encourage more religious believers to contribute to Xinjiang's development and stability, he demanded effective measures be put in place to contain the breeding and spreading of religious extremist elements.
"Meanwhile, we should maintain a high intensity in fighting violent terrorist activities in accordance with the law," he said.
Yu also paid a special visit to Bachu County, Kashgar Prefecture, where he relayed the central authorities' condolences to the survivors and family members of those who died in a deadly clash with a group of alleged terrorists on April 23.
Describing employment as a key aspect concerning both public well-being and social stability in Xinjiang, he called for more support for vocational training and the growth of labor-intensive industries.
Yu also urged efforts to improve ethnic minority language-Mandarin Chinese bilingual education environments at local schools, thus fostering communication among different ethnic groups.
Noting that the fundamental means for Xinjiang to realize stability and prosperity is through economic and social development, Yu urged efforts to quicken the development of specialty industries while protecting the environment.
Posted by Claude Arpi at 2:04 PM