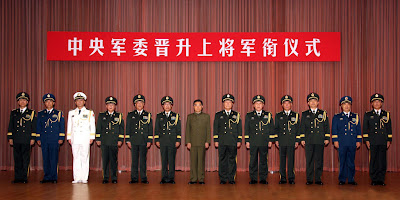 The author of this otherwise good article is wrong when he states that the PLA recently gained strength because it is: "only answerable to a divided civilian government with no clear leadership and decision-making structure, the PLA is afforded more leeway and discretion to make and execute foreign policy than it might otherwise have."
The PLA has never been answerable to the civilian government (which might be divided as the author points out).
The People's Liberation Army is only answerable to the CCP. In the Middle Kingdom, the Army is the Party's Army, not the government's. It makes a big difference.
A lot of papers have been written on the Change of Guard in 2012 (7 out 9 Standing Committee of the Politburo's members will retire), but little is known about the changes in the Central Military Commission (CMC). We only know that Xi Jinping, the next Secretary General of the Party (and President of the PCR) was not able to make it to the CMC (last September) and will therefore not replace Hu Jiantao as Chairman in 2012. The future of China depends of the new CMC, which may remain under the Chairmanship of Hu until 2017.
Even strategic issues such as the 'diversion' of the Yarlung Tsangpo/Brahmaputra may ultimately be decided by the CMC.
Does the present President Hu fully control the generals? It is a difficult question to answer. Probably not, as the new 'core interests' demonstrate.