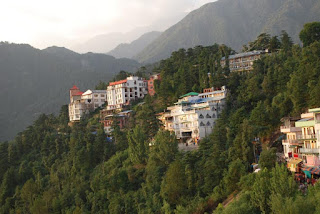 The problem might not be with 'Chinese spies' who can relatively easily be spotted in Dharamsala, but with Tibetans on the payroll of the Chinese Government (either for money or other reasons).
They are plenty of such people in Tibet and it is not difficult to ex-filtrate them to India. In any case, the Chinese embassy is keeping a close tab on the Dalai Lama's activities in India and it is difficult to stop this.
What about the security of the Dalai Lama when he goes outside Dharamsala? It is handled by the respective State Governments with the help of the central agencies, but once again the main threat could come from Tibetans, not Chinese, particularly in the large monasteries in South India.

Tibetan government in exile fears Chinese infiltrations
Hindustan Times
Gaurav Bisht,
Dharamsala,
September 08, 2010
While Tibet's exiled spiritual the Dalai Lama's security remains the centre of concern, the Tibetan-government-in-exile fears "infiltration" of Chinese undercover agents in the hill town that has been nerve centre of Tibetan movement.
Fearing China could unleash its band of army trained undercover agents in the town, the security wing of Tibetan - government- in- exile cautioned the Indian security and intelligence agencies. Security department in its communication to Crime Investigation Department of state police anticipated Chinese infiltration in Tibetan settlements clustered across India in the garb of monks.
"Necessary steps are being taken in wake of anticipation of Tibetan administration Senior Superintendent of Police, Dr Atul Fulzele confirmed to Hindustan Times, while adding that effective steps have been taken to upgrade security of Tibetan spiritual leader, the Dalai Lama. Police has asked Ministry of External Affairs to provide funds for installing chemical detector at Dalai Lama's palace. Dalai Lama's has three tier security manned by Himachal Police. Internal security is looked after close protection group of Tibetans.  More than 150 men are deployed for round the clock security of Dalai Lama's palace.
Tibetan government fears come two months after a Chinese woman was arrested in Mcleodganj for staying without valid travel document.  Chai Sha Hung, convicted for violating foreigners act, was deported back to her home town last month, the police suspected her of being a spy but claims could not be established.
Sources in Tibetan government-in-exile maintains Chinese intelligence agencies was keeping track about the activities of Tibetan government and Non Government Organization that are at fore front of campaign to secure freedom for China administered Tibet. "Chinese government has become more wary of the Tibetans after protest scattered across Tibet ahead of Beijing Olympics" felt, senior official of Tibetan security.  China had blamed Dalai Lama and his "clique" for orchestrating protest in Tibet that turned violent killing more than 150 people. On being tipped by intelligence agencie, local police arrested a Chinese man in 2008. Intelligence gathering confirmed that arrested Chinese man Liu Xia  had served  Peoples Liberation Army.   Information gathered by Indian intelligence revealed that Liu had visited Dharamsala twice before protest spread in Tibet.
What came to the surprise of Intelligence agencies was Liu mobile phone details which confirmed that he was in touch with high ranking military official in Lhasa. Xia has reportedly revealed that he had come by road from Lhasa, and later reached Delhi after traveling through Nepal illegally. In the wake of renewed qualms of Tibetan government, local police has stepped up vigil on  Tibetan escapees, although their numbers have decreased drastically  ever since China tightened security on its borders.  According to Tibetan security agencies on and average 2000- 3000 Tibetans crossed into India from Nepal but this year only 200 have arrived in Dharamsala so far.
"We have sent an advisory to all the Tibetan welfare officer asking them to educate Tibetans about the possible infiltration of Chinese monks " said a Tibetan security official requesting anonymity.  Police have advised Dalai Lama to maintain a particular distance while meeting the new entrants at his palace.  The Dalai Lama routinely meets the Tibetan exiles in his palace. Tibetans government has warned the exiles to remain cautious about the activities being undertaken by followers of Dorje Shugden. Dalai Lama had banned worship of Dorje Shugden. The Dalai Lama identifies Dorje Shugden as a "spirit", and claims that tradition of propitiation associated with Shugden elevates this spirit to being equal or superior to the Buddha. He states that encouraging the worship of Dorje Shugden could contribute to reducing Tibetan Buddhism to a form of superstitious spirit worship. Tibetans exiles say that China was using Shugdens for prpoganda against Dalai Lama.
Posted by Claude Arpi at 1:09 PM