Water Quality in The Tibetan Plateau 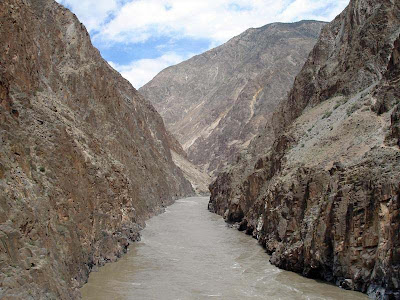 A very important and interesting PhD thesis has been published by Xiang Huang on "Water Quality in The Tibetan Plateau — Chemical Evaluation of the Headwaters of Four Major Asian Rivers" for the University of Eastern Finland Faculty of Science and Forestry under the supervision of Professor Mika Sillanpää (mika.sillanpaa@uef.fi).
President Hu Jintao who likes to speak of Scientific Development of China should encourage more of such studies. Ideally, they should be undertaken jointly with neighouring States such as India, Bangladesh or the Mekong countries.
Delhi should push Beijing to work in this direction. Does not Tibet 'shares' its waters with the entire Asian continent?

Abstract of the PhD thesis of Xiang Huang:
Information on water quality of Asian major rivers draining Tibetan Plateau is limited, even though these rivers play a significant role in lives of more than one third of world’s population. The purpose of this study was to contribute to the knowledge of the chemical quality of these major rivers on the Plateau, to address major natural factors governing the spatial variation and to identify possible sources for contamination.
Water samples from a total of 159 sampling sites along the Yangtze River, Mekong River, Salween River, and Yarlung Tsangpo (Brahmaputra) in the Plateau were collected during spring 2006, later summer 2007 and early autumn 2008. Included in this work are also a case study of the drinking‐water quality in Lhasa city and a study of influence of a natural heavy metal enriched subsurface water and mining activity on the surface water quality in the central Tibet. Samples were subjected to a total of 34 physicochemical quality parameters, including major cations, anions, trace elements, and nutrients.
The solutes in the Tibetan rivers were dominated by Ca2+ and HCO3 ‐and that the dissolved matter is on average the double of that of rivers in other parts of world. Elevated concentrations of Na+, Cl‐, and SO42‐, being largely influenced by evaporites and drainage from saline lakes/geothermal waters, are a significant contributor to these high concentrations of solutes. Oxidation of sulfides is in addition an important source for the high SO42‐in these waters. The spatial distributions of these major solutes in these waters are relatively homogenous. Multivariable analysis shows that geology and climate are the major factors governing the spatial variation. In spite of alkaline nature of these waters, the average levels of dissolved trace elements in the Tibetan rivers are high and their concentrations varied considerably. Nevertheless, the levels of Ag, Cd, Co, Cr, and Hg are negligible in all studied waters.
The headwaters of these Asian major rivers in the Plateau can be considered undisturbed. However, rapidly increased mining activities pose a high risk of heavy metal pollution for the local environment and a potential threat to the downstream water quality.
Posted by Claude Arpi at 12:06 PM