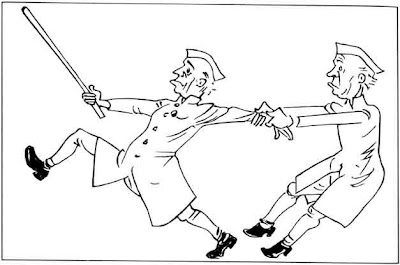 A few years ago, I wrote the text for an exhibition of famous cartoonists on Tibet.
During the next few days you can see the exhibition in Kochi.
Like this cartoon of Shankar (Nehrus' split personality over the Tibet issue), some are truly great.
Don't miss the exhibition.

In solidarity with Tibet
New India Express
September 2, 2010
K Surekha
KOCHI: Tranquility twinkles in their eye and stands out even in their rugged features. The people of the country which leads a pilgrimage to the core of their inner being to understand the truths of life cannot be otherwise. Tibetans in India have been leading a peaceful existence but with the pain of displacement. Communists who hardly know the meaning of meditation or awakening would never understand.
It is this collective spirit passed on for about 2000 years that stand them in good stead even in their darkest hours. It’s a never ending struggle for their right for independence. Friends of Tibet (India) has organised an exhibition of cartoons on the Tibetan issue, currency, coins, passport, post office and the history of Tibet that take you to its independent  existence.
The introduction of the show by Claude Arpi starts with the words of His Holiness Tenzin Gyatso, the XIV Dalai Lama, “My religion is simple, my religion is kindness. The exhibition is a stark reminder of turbulent times of the Lama’s lost state, Tibet, the roof of the world, flanked by India and China.
Facts have been rendered with a punch in the cartoons done between 1950 and 2005. The land ruled by  Dalai Lamas since 1642 was invaded by China in 1949. After a decade Dalai Lama was forced to seek asylum in India.
R K Laxman brings out the character of the Lama through his caricature  done in 2000. His words introduce this great man. The Dalai Lama was born on July 6, 1935 in a hamlet in Amdo province. Recognised as the reincarnation of Lama 13 at the age of two he was later enthroned in Lhasa. Each frame brings out the history of the land and the reactions of powers that be and its neighbours to the issue in a humorous vein. 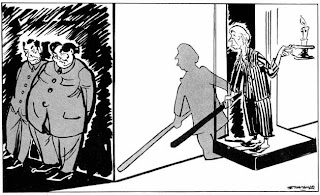 Shankar’s piece dated November 5, 1950 published in Shankar’s Weekly shows Nehru with his hands on a fence looking at the Chinese invading Tibet (October 7, 1950) and US president Truman and secretary of state Acheson with their backs to him laughing away with the words, “we told him so.” India didn’t take a stand against Beijing’s though it was extremely disappointed with the action. Shankar has sketched Nehru with a suitcase labelled Peking marching on his maiden trip to Beijing even as world leaders look on with myriad expressions. US secretary of state Dulles is depicted with a bomb, Pakistan PM with a knife, Churchill and Melenkov with a frown and many other with arms and negative expressions. Shankar’s ‘Pen Friends’ in which he plays on ‘Panch Sheel’ and Indo-China agreements is layered with meaning. The days of Nehru is no different from the present era where we see Manmohan Singh and Sonia Gandhi with a placard saying Indi Cheeni Bhaayi Bhaayi.
O V Vijayan has potrayed the politics of early 70s as we see Leonid Brezhnev and Mao looking in opposite directions at the time of the Communist splits, the caption saying, ‘the revolution is ours’. 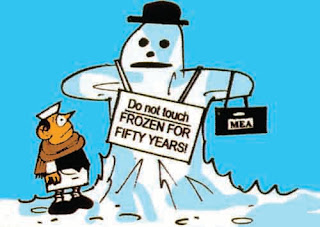 The smell of blood nauseates as you read Ravi Shankar’s work. The atrocities shown to Tibet loom large as you move from frame to frame. Cartoons of Yesudasan, Mario Miranda, Rajinder Puri, Prriya Raj, Nanda Soobben, Abe Gowda, Kaak, Madhu Omalloor, Balu, Thommy, Ponnappa, Morparia throw light on the issue with double meanings.
Prakash Shetty shows the Lama’s optimism with words, ‘never give up’. The culture of Tibet comes alive in the posters describing their simple way of life, sans violence and thoughts of war, arms or army and the history of the land. A transistor made by Zenith Royal for Lama, an avid listener of BBC is also on
display.
The exhibition will run through September 3 and an exhibition will be held at Gateway Hotel on September 4, the day the Lama is expected in the city.
Posted by Claude Arpi at 11:54 AM