Will the Arunachal dam be scrapped? 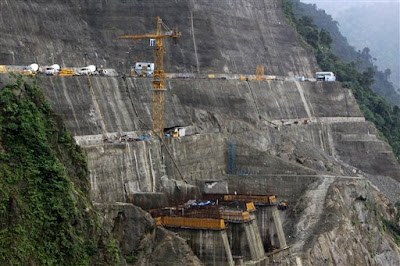 If it is confirmed it is a great news. Usually, the dam builders start the construction and later ask the environment assessment. As a result, the local population face a fait accompli.
This area witnessed the most powerful earthquake of the 20th century. It was on Independence Day of 1950; it measured 8.9 on the Richter scale. How can it be ignored?
If India abandon the project, she can certainly put more pressure on China to stop its own projects on the Brahmaputra, particularly the mega dam just north of the McMahon Line in Metok (the hydropower plant ave a capacity  of 38,000 megawatts, larger than the Three Gorges Dam -22,000 megawatts).


Arunachal dam should be scrapped, says Jairam
Hindustan Times
September 10, 2010
After vetoing Vedanta Group's bauxite mining project in Orissa last month, Union Environment Minister Jairam Ramesh has decided to bat for anti-dam activists in putting the brakes on mega hydel projects in the northeast.
The minister called for the halting construction work on the 115-metre-high Lower Subansiri dam in Arunachal Pradesh after an expert committee report in June said the dam was not environmentally feasible.
"The work on Lower Subansiri dam should not have continued after an expert committee on the project recommended a review and redesign of the dam," Ramesh said.
The 100-plus dam projects in the northeast have been debated over by environmentalists for quite sometime.

R50,000 cr loss
India has lost natural resources worth R50,000 crore since 1990, and the benefit of protecting the environment could be worth 10 to 50 times the damage, a report has said.
Congress chief Sonia Gandhi raised this point at Dadri in Uttar Pradesh, when she said protecting forests and the environment was important to sustain India's growth story.
The report, The Economics of Ecosystems and Biodiversity, released by Environment Minister Jairam Ramesh on Thursday, said that on an average, one-third of Earth's habitats have been damaged by humans.
For instance, 85 per cent of the seas and oceans and 70 per cent of Mediterranean shrubland have been affected. "Functioning natural system is a prerequisite for our well-being," the report said.
"For local development, considering ecosystem services in policymaking can help save the future municipal costs, boost local economies, enhance quality of life and secure livelihoods," the report said, citing the Sanjay Gandhi National Park in Mumbai that saved the city from a colossal flood in July 2005.
One such policy change is considering environment performance in allocation of money to state governments, it said.
(inputs from Chetan Chauhan)
Posted by Claude Arpi at 12:43 PM