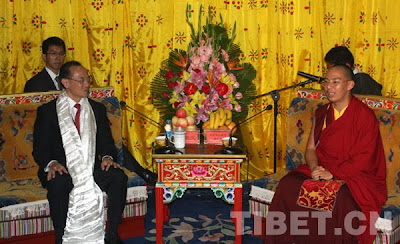 Though he is not recognized by the Dalai Lama and the Tibetans, Beijing has begun to use 'their' Panchen Lama full swing.
It is a way to prepare the 'succession' of the Dalai Lama. He will probably soon start to travel abroad in 'safe' countries.  It is sad that the Singaporean Foreign Minister accepted to play Beijing's small game.

The 11th Panchen Lama Bainqen Erdini Qoigyijabu, member of the Chinese People's Political Consultative Conference (CPPCC) and vice president of Buddhist Association of China met with Singapore Foreign Minister George Yeo at the West Yellow Temple in Beijing Tuesday afternoon.
The Panchen Lama expressed his warm welcome to Foreign Minister Yeo and the Buddhist delegation from Singapore.
Foreign Minister Yeo presented flowers and hada to the Panchen Lama to show his respect and express his thanks.
"China and Singapore enjoy a long history and close ties in Buddhist exchanges. Our meeting today is the development of the friendship between the 10th Panchen Lama and Singapore Buddhist circle, and is also a new step forward toward closer cooperation between the two sides," said the Panchen Lama.
He also spoke highly of the efforts and achievements made by the Buddhist circles in their participation in and promotion of social charity and harmony between diverse religions and ethnic groups of Singapore. Also he expressed his best wishes to the Buddhists and the masses in Singapore.
Foreign Minister Yeo conveyed his congratulations to the Panchen Lama's bhiksu ordination in June of 2009. He said, nowadays more and more Singaporeans go  to visit Tibet and are amazed with the rapid development there.
During the meeting, Yeo invited the 11th Panchen Lama to visit Singapore in his capacity of a CPPCC member, and the Buddhist community also welcome him for religious practice.
The Panchen Lama accepted the invitation happily.
Posted by Claude Arpi at 12:36 PM