One more piece in the dams' puzzle 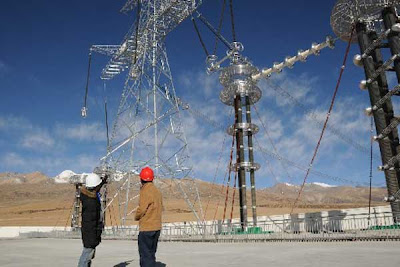 One more piece in the great puzzle of the damming of Tibet's rivers.
A few weeks back, I wrote on this blog: "Considering that the Tibetan plateau has the greatest hydrological potential in the entire People's Republic (China's theoretical hydro-power resources have been estimated at 384 gigawatts), it is doubtful that this transmission line will be used to bring power from mainland to Tibet."
Today, Beijing admits that Tibet can 'also' supply some power to the mainland. With the rapid construction of several dams on the Tibetan rivers, it is the Roof of the World which is bound to supply electricity to China and not the other way. It is also the best way to prepare a mega project on the Brahmaputra.

NW China province to transmit power to Tibet
2010-09-16
Xinhua
Experts approved a construction plan to transmit power from northwest China's Qinghai Province to Tibet by connecting Qinghai and Tibet's power grids on Wednesday.
China will spend 16 billion yuan (2.37 billion U.S. dollars) in connecting the grids during the next two years.
China's National Development and Reform Commission approved the construction of the grid on June 17. It will be completed and put into operation by the end of 2012.
Tibet's grid is not currently linked to any other grids. During the dry season, the region lacks power because about 80 percent of its power supply comes from hydro power stations, while in flood season, there is too much power.
After the grids are connected, the surplus power during the flood season will be transmitted to Qinghai or other parts of China through the Qinghai grid while power from elsewhere can be transmitted into Tibet during dry season, said Zhang Wenliang, head of China Electric Power Research Institute.
It will be a world class power transmission project with high safety, efficiency and environmentally-friendly standards, said Wen Weibing, deputy head of the Qinghai-Tibet grid connection construction headquarters, State Grid Corporation of China.
The project will be constructed in three phases
In the first phase, a 750 KV transmission line will be strung from Xining City, capital of Qinghai, to Golmud City in the center of the Qinghai-Tibet Plateau;
Next, a 400 KV transmission line from Golmud to Lhasa, capital of Tibet Autonomous Region, will be hung;
Third, a 220 KV grid facilities within Tibet will be built.
The transmission line will run 1038 km from Golmud to Lhasa. About 900 km of the line will be built on lands that are at least 4,000 meters above sea level, making it the longest power transmission line ever constructed at such high altitudes.
Experts warn, however, that harsh conditions on the plateau might affect the workers' health along with their efficiency.
Currently, more than 4,500 workers are at the sites, involved in preparatory works. The number of workers is expected to reach 20,000 during its peak time, according to statistics from the construction headquarters.
The project has allocated 300 million yuan for medical care and environmental protection. First aid stations are being built every 25 to 30 km and clinics are to be set up every 100 km along the line. Workers will be trained in bases in Golmud and Lhasa to become accustomed to the environment before going to the work sites, said Fa Tao, head of the project's medical and life support department.
"Our goal is to ensure three zeroes - zero death, zero disability and zero permanent health damage for workers of the project," he said.
Another challenge for those involved in the project is to avoid affecting Qinghai-Tibet plateau's fragile ecology. "Whenever there is a conflict between construction and ecology, we will make way for environmental protection," said Yu Xinqiang, head of the construction headquarters.
The soil, along with the plants in it, will be taken away and preserved before a transmission tower is constructed. Then the soil and plants will be returned to its original site, according to the construction plan.
Workers are strictly prohibited from hunting or disturbing animals on the plateau. Also, transmission towers should be located away from animal habitats, according to the plan.
A section of 550 km of the transmission line will be built on frozen soil that could become unstable due to temperature changes. "Construction on frozen soil is difficult, but we have developed some technologies to ensure the project progresses as planned," said Ding Yansheng, head of the construction headquarters' technology department.
Experts note that with the experience of constructing the Qinghai-Tibet railway line, the world's highest and longest railway on a plateau, most of the project's challenges have previously learned solutions.
Posted by Claude Arpi at 1:35 PM