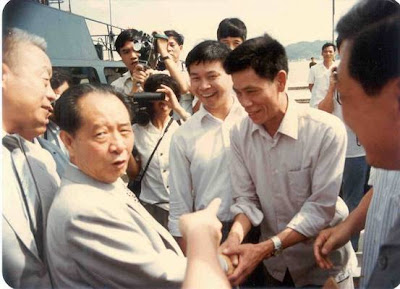 Despite Wen Jiabao recent speech in Shenzhen, China is definitively going backward. On September 15, the Ministry of Justice announced an 'increase' of its assistance: "to Tibet’s administrative work, including cadres and talent, science and technology, as well as other areas in the judicial system."
This is very ominous.
Let us remember that between May 22 and 31, 1980, General Secretary Hu Yaobang led a Working Group of the Party Central Committee (PCC) to Tibet. According to a collaborator of Hu: "This event was watched with great interest by those, both at home and abroad, who were concerned with Tibetan society, and it can be said that this event marked the beginning of a new era for the PCC's Tibet policy."
In Lhasa, Elder Hi gave a speech: "On May 29 Hu Yaobang made a very sincere and passionate political speech at a gathering of 5,000 cadres. The slogan put forward in the speech was 'Strive to build a united, prosperous and civilised new Tibet' ('Wei jianshe tuanjie fuyu wenmingde, xin Xizang xiang nuli douzheng'). In the speech Hu listed six tasks facing Tibet:
1. To exercise nationality autonomy in the region fully - that is to say, to let Tibetans really be the masters of their own lives.
2. A commitment by the Central Government to relieve and reduce burdens of the people, exempting the from agricultural and animal husbandry tax over the next three to five years in order to allow the Tibetan people a chance to recover.
3. To adopt a special policy to revive the Tibetan economy, including the adoption or a system of private economy in line with Tibetan circumstances. Nationwide this initiative was developed into the economic (household) responsibility system.
4. To make great efforts to develop agriculture and animal husbandry as well as the manufacture of consumer goods, in order to promote economic prosperity and enrich people's lives.
5. To make efforts to develop Tibetan science, culture and education, and to prepare for the establishing of the University of Tibet.
6. To implement the policy on minority nationality cadres correctly, to strengthen the unity between the Han and Tibetan cadres, and to transfer a large quantity of Chinese cadres who had worked in Tibet for many years back to the interior.
Today, we are witnessing a reverse situation, with Beijing sending more and more cadres and bureaucrats in Tibet "to maintain social stability; and promote patriotic and ethnic unity education in the communities, countryside, schools and temples." Frightening!

China to Send More Cadres in the Judicial System to Tibet
Source: Xinhua, September, 15, 2010 http://news.xinhuanet.com/2010-09/15/c_13513569.htm
According to Xinhua news on September 15, the Ministry of Justice is to increase its assistance to Tibet’s administrative work, including cadres and talent, science and technology, as well as other areas in the judicial system. The proposal was made during the National Judicial Administrative System's Conference to Aid Tibet.
Wu Aiying, the Minister of Justice, said that [China] should assist Tibetan judicial administrative departments to maintain social stability; and promote patriotic and ethnic unity education in the communities, countryside, schools and temples. Regarding financial aid, Wu called for increasing the funding of Tibet’s judicial work, particularly the funding of prisons, reeducation through labor (detoxification), the financial-planning apparatus, law education and legal assistance. Regarding the assistance that includes cadres and talent, it was stressed in the conference to maximally solve the problem of the judicial administrative cadre and talent shortage, and to implement the training of directors of the judicial bureaus in all 73 Tibetan counties (and cities).
Posted by Claude Arpi at 9:40 PM

Dear Claude,
I think this text by HU Y. should be circulated more often and the Tibetans in exile should put it in front of all correspondence with the Chinese government and tell the media about it.