The integration of military and civilian development 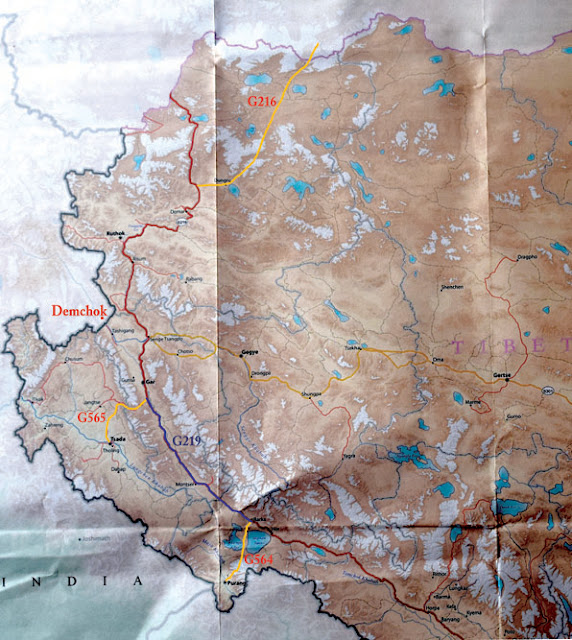 I recently mentioned the new roads being built in Western Tibet (Ngari) towards the Indian border (G564 and G565).
But that is not all.
According to Kangba TV, the Tibet Autonomous Region (TAR) has created a basic integrated transport network, with a total road mileage of 82,500 km, five airports, 71 domestic and international airlines, as well as the Qinghai-Tibet and Lhasa-Shigatse railway lines.
During a press conference, Sonam Chophel, director of the TAR transport department asserted: “Transport is the key role in economic development. Therefore, in order to break the bottleneck of economic development, we need to have good transport.”
Sonam Chopel also said, “In 2016, TAR has attracted a total investment and bank loan of 54.6 billion yuan [for infrastructure]. 44 key road projects are under construction.”
The TAR has spent 8.5 billion yuan in railway projects in 2016, and 7.5 billion yuan were used on the Tibet section Sichuan-Tibet Railway.
With the arrival of Che Dralha at the helm of the TAR government, this trend will probably accelerate, as one of his objectives is to develop tourism on a large scale.
China Tibet Online further announced that “the highest ring road is being built”.
With six lanes, the road will circle around Lhasa city. It will have a total length of 100km; it will include seven tunnels and 27 overpasses.
Once the road is opened in June, the drive around the capital city will only take two hours.

Loyalty to the core
On January 11, Wu Yingjie, Secretary of the TAR Party Committee, met a delegation of senior officers of the People’s Armed Police on the side of the Regional People’s Congress.
Lt Gen Xu Yong, the Commander of the Tibet Military Region was in attendance.
It is said that the atmosphere is very warm.
Wu asked the officers to pledge “absolute loyalty to the party under the strong leadership of the Party Central Committee with Comrade Xi Jinping as the core, with the unselfish support of the people of the whole country.”
He urged the attendees to “consolidate the good situation of sustained harmony and stability, to maintain sound and rapid economic and social development and to achieve the objectives of the 13th Five-Year Plan.”
The Armed Forces have made outstanding contributions for the maintenance of the local stability, the economic development, the improvement the people's livelihood and the implementation poverty alleviation and national unity, he said.
He added that Tibet is located “in the southwest border of the motherland, in the first line of anti-separatist struggle; it is the main battlefield.”
This refers to the Tibetans living in India.
Wu insisted that he hoped that the PLA stationed troops will resolutely implement "the instructions of the Party Central Committee, the Central Military Commission and the President of the CPC while strengthening the army's objective under the new situation.”
He probably meant the in-depth reforms of the PLA.
Wu also repeated: “One must be absolutely loyal to the core. The central position of General Secretary Xi Jinping was established …to comprehensively promote reform, development, stability, internal affairs, foreign affairs, national defense and the rule of the Party.”


The integration of military and civilian development
Perhaps more importantly for India’s borders, Wu asked the troops and officers to “promote the integration of military and civilian development.”
It has serious implications for the infrastructure on the plateau, particularly for the new roads leading to the Indian border.
Wu remarked: “Party committees and governments at all levels should inherit and carry forward the glorious tradition of unity between the military and the army and the people, and further consolidate the military-military-civilian relations between the army and the people.”
Note that the building of the above-mentioned ‘integrated infrastructure’ relates to both the military and the civilian.
For the Party boss of Tibet, it is necessary to “conscientiously implement the economic construction and national defense construction.”
He further mentioned “the implementation and the integration of these views on development”, while urging the officers “to adhere to military and civilian joint construction” and take the initiative "to integrate national defense and military construction into local economic and social development planning.”
India could perhaps learn for Tibet and China.
Posted by Claude Arpi at 10:43 AM