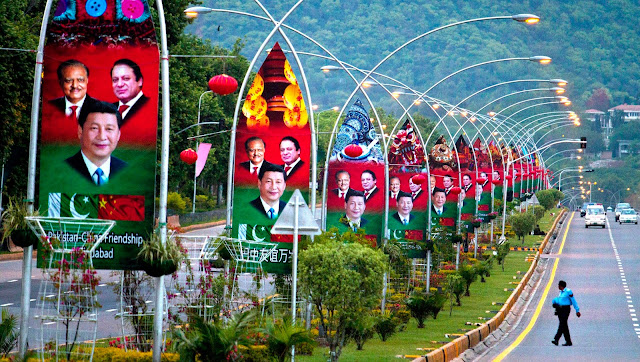 As President Xi Jinping arrived in Islamabad in April 2015, he was welcomed by huge billboards in Chinese and English: the friendship between China and Pakistan was ‘higher than mountains, deeper than oceans, sweeter than honey, and stronger than steel.’
In an article published in Pakistani papers before he landed in Islamabad, Xi wrote: “This will be my first trip to Pakistan, but I feel as if I am going to visit the home of my own brother.”
He added that the bilateral relationship ‘has flourished like a tree growing tall and strong’.
It was very touching!
More prosaically, The Washington Post remarked: “Xi arrived in Islamabad bearing real gifts: an eye-popping $46 billion worth of planned energy and infrastructure investment to boost Pakistan's flagging economy. This would include adding some 10,400 megawatts to Pakistan's national grid through coal, nuclear and renewable energy projects.”
It was a Chinese Dream for Pakistan!
Beijing had decided to set up a China-Pakistan Economic Corridor which would link up Xi's pet project, the two New Silks Roads (also known as ‘One Belt, One Road’).
The ‘corridor’ was to have railways, roads, optical fiber cables, dams (to produce the necessary electricity), pipelines and was to connect the port of Gwadar on the Arabian Sea through the Karakoram Highway, to the Xinjiang province of China and then Central Asia …and later Middle East, Africa and Europe.
Since then the project has been inaugurated.

Impermanence
What political observers often forget is the impermanence of all things.
In 1953, The People’s Daily published an article criticizing Pakistan and the US for the ‘too’ close relations.
It is worth reading the translation sent by the Indian Embassy in Beijing to the Ministry of External Affairs in Delhi.
Incidentally, Shalabh Kumar, the Chairman of the US Republican Hindu Coalition recently affirmed that the US President-elect Donald Trump had told him that the new administration is “not going to tolerate a dual role from India’s neighbors.”
Kumar added: “The US President-elect made that policy very, very clear, that he is not going to tolerate a dual role from India’s neighbors. You need good defense cooperation among friends, which is happening but is going to accelerate dramatically in the common fight against terrorism.”
Of course, as I said, there is no such a thing as Permanence in politics.
Buddha has defined anicca (Pali) or anitya (Sanskrit) as one of the three marks of existence: all conditioned existence, without exception, is "transient, evanescent, inconstant".
All temporal things, whether material or mental, are compounded objects in a continuous change of condition, subject to decline and destruction.
I presume it is true in geopolitics too.

WHAT FOR HAS [ADMIRAL JERAULD] WRIGHT COME TO PAKISTAN

The article points out that the recent visit of the Commander of the American Flagship, Pittsburg [Admiral Jerauld Wright], to Karachi marks a further step in the chain of American attempts to induce Pakistan to join the Middle East Defence Organisation and turn into a military base. Quoting the words of the Naval Commander spoken in a press interview on board the ship and the comments of The New York Times, harping on the strategic importance of Pakistan, the article states that America regards Pakistan as a worthy target fulfilling all conditions for its aggressive designs. The article then refers to visits by Mrs. Rosenberg, Assistant Secretary for Defence, high-ranking American military officers and the Deputy Joint Chief of Staff of Turkey made in 1951-52 – all to induce Pakistan to join the Middle East bloc.
The article then refers to a report emanating from Karachi and Delhi press circles in March 1951 saying that America was trying to exploit the Kashmir dispute to persuade Pakistan to join the Middle East Defence Command. The article further states that America also tried to use Pakistan’s food shortage to force her into her camp. In December 1952, according to the article, the American Ambassador in Karachi insisted that Pakistan authorities should change their attitude on certain matters, especially on the question of Middle East Command. The article finally refers to a “Commercial Navigation Treaty” proposed by America to Pakistan in April 1951 (and which is still in a draft stage) according to which Pakistan rupee was to get most favourable exchange rate vis-à-vis the U.S. dollar, goods imported from America would enjoy equally favourably treatment with the British goods, the American investments in Pakistan would receive protection and the Visa system for American visitors to Pakistan will be abolished. The article says that this American infiltration in Pakistan is bound to be resisted by the British with all their might. Moreover, it is already meeting with growing opposition from the people and public organizations of Pakistan.
Posted by Claude Arpi at 3:56 PM