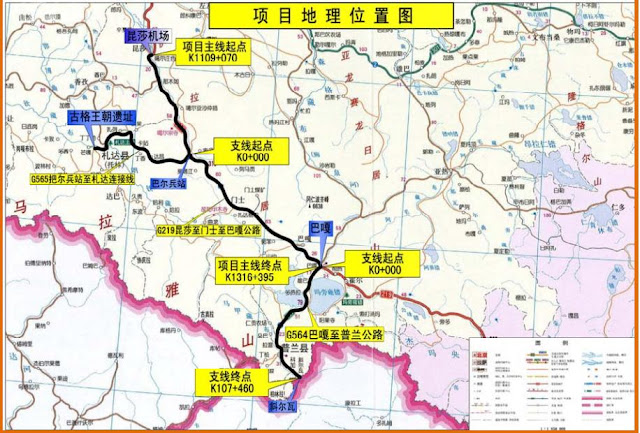 The Chinese Law on Environmental Impact Assessment (EIA) requires the State to consult the population about any new project; it is how some information on the new highway projects in Western Tibet (Ngari Prefecture) came in the public domain.
Last week I had mentioned the construction of a 558 km-long highway connecting Xinjiang and Tibet, via Minfeng.
The deeply-worrying aspect of this project is that it crosses the highly eco-sensitive Changthang National Nature Reserve. It runs for 110 km in the main reserve, about 270 km in the buffer zone and some 100 km in the ‘experimental area’.
The new road will ultimately connect G216 to G219 highways and end up in Tibet, north of Rutok near Panggong Tso in Ladakh.

Two new highways and an one upgraded
Two new roads have also been announced through a EIA notification.
Further, the G219, the main artery connecting Tibet to Xinjiang should soon be upgraded. All this will be done during China's 13th Five-Year Plan (2016-2010).
A new highway, known as G564 will connect the G219 to Purang/Taklakot located near the tri-junction Nepal-India-Tibet.
The G564 will branch off from the G219, near Mount Kailash (Tharchen) and head south, passing between Manasarovar and Rakshas lakes before continuing towards Purang/Takalkhot.
The length of the road will be 107 km, it will have a width of 12 m; it is designed for a speed of 80 km/h. The construction should take 36 months; it would have started in September 2016 and it is supposed to be completed by August 2019.
The second highway, the G365, will connect the G219 (in Kunsha/Gunsa Township) to Tholing (Zanda in Chinese). It will probably continue to the famous religious complex of Tsaparang; the ruins of the Guge Kingdom are presently being restored to bring a large number of Chinese tourists.
The length of the road is about 117 km. It will be slightly narrower than the G564, with a width of 10m. It is designed for a speed of 60km/h. Construction schedule is the same as for the G564.


Upgrading the G219
Some 207 km of the G219 will be upgraded between the Mt. Kailash area and Kunsha, where the new highways respectively branches to the G564 and the G565 (see map above).
The G219 will have a width of 12 m and it is designed for a speed of 80 km/h.
According to a Chinese website, the objectives of the two new highways are: “to improve the Tibet Autonomous Region road network infrastructure and improve the highway traffic conditions.”
But the main objective is clearly to develop tourism.

The ruins of the ancient Kingdom of Guge are the main attraction around Tholing (which is incidentally very close of the Indian border – Chamoli district of Uttarakhand).
The Chinese are also planning a railway line along the G564 to Purang, hoping to develop trade with Nepal on a large scale.
Before undertaking the rail line, the section towards Kyirong (from Shigaste) will have to be extended towards Ngari. It will probably happen after 2020.
A Chinese website says the three highways (G219, G564, G565) will pass through the Mabian Yongmu (?) Wetland Nature Reserve, the Kailash National Forest Park, the Manasarovar scenic area, the Tholing Forest Nature Reserve,  the Tholing County Geological parks and the Guge scenic area (Tsaparang).
The project has been entrusted the Chongqing Design and Research Institute Co., Ltd. of the China Coal Industry Group.
The coal companies are everywhere in China.

On the Indian side of the border
In July 2016, Union Road and Transport Minister Nitin Gadkari announced that the Modi government was “hopeful of completing by next April [2017] the construction of highways through Uttarakhand for Kailash-Mansarovar to make it easy for people to visit the abode of Lord Shiva. “
The Minister told PTI: “Kailash-Mansarovar is the identity of our rich ancient culture and heritage. …We are cutting rocks through Himalayas to make a new alignment of highways through Uttarakhand for going to Mansarovar.”
Mr Gadkari claimed: "We can reach Mansarovar directly through Uttarakhand,” it is not certain that Beijing, in its present mood, will agree to receive hordes of Indian pilgrims.
In any case, let us see if the minister keeps his promise. It is doubtful.
But for sure, a highway to Mt. Kailash will be opened on the other Tibetan side by 2019. 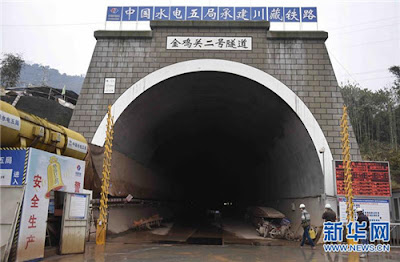 The Construction of Sichuan - Tibet railway accelerates
In the meantime, a publication affiliated with Xinhua reported yesterday that "the epic Sichuan-Tibet railway is accelerating construction at both ends -- the section between Chengdu to Ya’an, Sichuan province, and the section between Lhasa to Nyingchi, Tibet Autonomous Region."
As mentioned earlier, the 1,900-km line starts from Chengdu and ends in Lhasa; it passes through Ya'an, Kartze, Chamdo and Nyingchi.
The same publication said: "The Jin Jiguan No.2 tunnel in Ya’an is the first tunnel from the hilly region of Sichuan to Qinghai-Tibet Plateau, and is expected to be completed in March this year."
The Chengdu-Ya’an section should be the first section opened to traffic in June 2018.
Once completed, the travel time from Chengdu to Lhasa will be reduced to 13 hours, with a speed limit of 200 km/h.
Posted by Claude Arpi at 1:57 PM