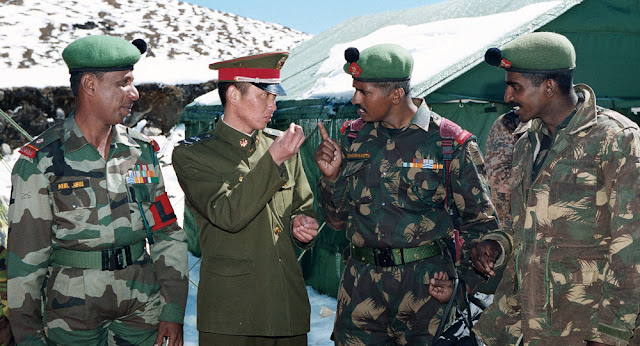 On New Year day, a Border Personnel Meeting (BPM) between India and China was held in a Chinese hut near a place called Damai, north of the Lohit sector of Arunachal Pradesh. The Indian delegation was led by Brigadier S.S. Bhogal, who commands a brigade in the area, while China was represented by Senior Colonel (equivalent to a brigadier) Hu Xiao Bao, commanding the Zayul Garrison of the Chengdu Military Area Command.
The Times of India reported: “This year there was something new and exciting about the meeting. After paying respects to the national flags and playing of the national anthems, the Chinese soldiers sprang a surprise and enthralled the audience by their performance on Hindi Bollywood songs 'Jai Ho' and 'Ankhe Khuli Ho Ya Ho Bandh'.”
Then, Chinese women performed some ‘scintillating dances’, while male soldiers of the People’s Liberation Army (PLA) gave a feel of their voices.
The report speaks of growing bonhomie and brotherhood between the armies of the two nations. But in view of past history, one should remain guarded, especially when Indian newspapers get carried away with too much ‘brotherhood’. Remember the Bhai-Bhai days?
However there is probably no harm in hoping for the best at the beginning of the New Year! The Indian Army’s spokesman also spoke of “fostering the feelings of friendship and commitment towards enhancing the existing cordial relations and maintenance of peace along the LAC.”
It is certainly better to dance and sing together, than to sponsor terrorism across the border, like another of India’s neighbours does.
Far away from the Lohit valley, Indian and Chinese border officials also met in Ladakh ‘to improve ties at the functional level’.
The Moldi Garrison in Chushul sector of Ladakh witnessed a BPM in a ‘free, congenial and cordial’ atmosphere; Brigadier Vijyant Yadav was seen shaking hands with PLA’s Senior Colonel Fan Jun.
The Northern Command’s spokesman Colonel S.D. Goswami told the Srinagar-based Daily Excelsior that this reflected the mutual desire of the 2 countries “to maintain and improve relations on the borders at functional level”.
Another encounter was held at what is called the world's highest BPM’s post; both delegations met in the vicinity of Daulat Beg Oldie (DBO) and Tianwendian (TWD). While the Indian delegation was led by Colonel Rinchen Dorje, the Chinese were commanded by Colonel Song Zang Li.
What is interesting is that a local Ladakhi represented the Indian Army. This is what makes India’s strength; China is today unable to incorporate Tibetans or Uyghurs in its defence forces, as they can’t be trusted by Beijing.
The CBMs come soon after the visit of Northern Army Commander, Lt Gen D.S. Hooda to Lanzhou Military Region, which is responsible for the Ladakh sector (this may change with the ongoing reforms in the PLA).
Does all this mean that like in the early 1960s, India is slowly being put to sleep by China?
No! In fact, Delhi has decided to go ahead with its border defenses.
Take the installation of latest gadgetry along the LAC to monitor movement of the Chinese troops near the LAC. A few months ago, The Excelsior had reported that the MHA and MoD had decided to install high resolution sophisticated cameras to keep surveillance on the PLA activities on the Indian side.
Army sources told the J&K daily that the new surveillance cameras would be first installed about 20 kilometers inside the Indian territory to ensure that the system doesn’t fail like the previous ones. And roads and advanced landing grounds are also built on a war-footing.

China’s Military Reforms
On the other side of the mountains, the PLA is fully involved in military reforms. In a commentary on January 1, The Global Times said: “With a strong army, China can be more politically appealing, influential and persuasive, and will make it easier to network. The army will be more capable of using the equipment and soldiers’ morale will be boosted.”
But the question on every defense analyst’s lips is: will the new reforms proceed smoothly?
On December 31, President Xi Jinping, who is also the Chairman of the Central Military Commission, inaugurated three new PLA ‘units’ or ‘services’, namely, the PLA Land Army, the PLA Rocket Force and the PLA Strategic Support Force.
President Xi said that it was “an important decision to realize the Chinese Dream and the Dream of a Strong Military, and a strategic initiative to build a modern military power system with Chinese characteristics.”
While the PLA Rocket Force will take over from the Second Artillery Force to “strengthen the trustworthy and reliable nuclear deterrence and nuclear counter-attack capabilities”, the PLA Strategic Support Force will deal with hi-tech warfare in space and cyberwar.
The seven Military Area Commands will soon be replaced by five battle zone commands, focusing on combat. The new Western Combat Zone will replace the two Military Area Commands today facing India in the High Himalaya.
The Global Times warned: “The latest military reform will meet many challenges and difficulties in the process.”
The mega reforms maybe complicated by another issue: the morale of the PLA. Indeed, the spirit of PLA officers and troops does not seem very high on the plateau.
On December 28, China Tibet Online published photos of a group of new recruits ‘releasing inner discomforts’ in Central Tibet. They were playing a psychological counseling game under the guidance of psychologists.
A detachment of Tibet’s border defense troops participated in group training activities in Shigatse; it was themed ‘releasing inner discomforts and welcoming new challenges’.
The exercise was meant for the new recruits, who experience inner and outer discomforts, while being posted on the Tibetan plateau.
The website explained that the course was designed “to help alleviate psychological pressure and ensure they pass the ‘second adaptation period’ smoothly.”
Already in May 2013, the Tibetan Centre for Human Rights and Democracy in Dharamsala had got hold of a fascinating manual exposing the psychological trauma faced by the People's Armed Police (PAPF) in Tibet.
During the recent Shigatse ‘counseling’, the detachment’s counselors, Zhang Yan and Li Linfu, “fully played to their strengths by using plain language to explain to the new recruits how to alleviate their own psychological pressure. The new recruits participated actively and were enthusiastic, coordinated and willing to try,” said China Tibet Online.
The article concluded: “This activity not only helped recruits relieve psychological pressure and relax their minds, but also strengthened their team spirit and collective consciousness.”
This means that several decades after the so-called ‘Liberation of Tibet’, the Chinese soldiers are still not at home on the Roof of the World.
India definitively has an advantage in the field of human resource, even if it does not have it in infrastructure and equipment.
During his last press briefing Senior Colonel Yang Yujun, the spokesman for the Ministry of National Defense, commented on the situation on the China-India border; he said: “The Chinese side is ready to work with the Indian side …to jointly maintain peace and stability in the border region.”
In the coming year, China will try to keep the situation on the border ‘peaceful’ in order to implement its reforms, but Delhi should realize that in the long term, the Chinese defence forces will become fitter, better prepared and far better coordinated.
While welcoming the CBMs, India’s leadership should not miss the opportunity to further strengthen its defenses in the Himalayas.
Posted by Claude Arpi at 6:55 AM