From Theocracy to Democracy 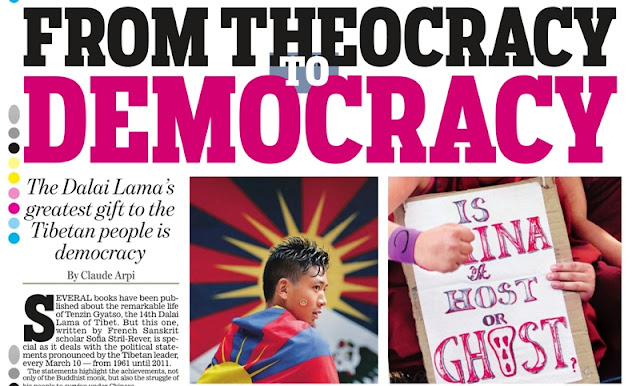 My review of H.H. the Dalai Lama XIV: My Appeal to the World appeared in
Mail Today a few days ago.

Innumerable books have been published about the remarkable life of Tenzin Gyatso, the 14th Dalai Lama of Tibet. The one written  by French Sanskrit scholar Sofia Stril-Rever (H.H. the Dalai Lama XIV: My Appeal to the World) is however special as it deals the political Statements pronounced by the Tibetan leader, every March 10, from 1961 until 2011.
Year after year, the Statements highlight the achievements not only of the Buddhist monk, but also the struggle of his people to survive under Chinese occupation or in exile.
On March 10, 2011, the ‘simple monk’ as he likes to call himself, pronounced his last Statement as he renounced his temporal power. As Stril-Rever notes, this marks ‘the end of the political authority of the Dalai Lamas’: “The speech was short, …eighteen minutes that have radically changed nearly four hundred years of Tibetan history.”
Ever since the Great Fifth Dalai Lama was given in 1642, the temporal and spiritual responsibility to lead the people of Tibet, the Dalai Lamas have ruled over the Roof of the World.
Why this ‘ritual’ statement every March 10?
On that day in 1959, the Tibetan ‘masses’ rose against the Chinese invaders and ‘with their bodies’ protected their beloved leader, who had been invited for a performance in the PLA garrison in Lhasa. The entire population of Lhasa stopped the Dalai Lama to attend the Chinese show, especially ‘without his usual Corps of Body Guards.’
Since then, March 10 is termed ‘Tibetan Uprising Day’.
The greatest lie of Communist China has been to make the world believe that Mao and his colleagues just wanted to ‘liberate’ the Tibetan people from the oppression of the aristocracy and the clergy.
During the days following the Uprising, according to Chinese figures, 87,000 Tibetans were killed for resisting the so-called Liberation. Ultimately on March 28, Beijing proclaimed ‘The Serfs are emancipated’ and since then, China celebrates the day as the ‘Serf’s Emancipation Day’.
What a price to be emancipated!
Stril-Rever’s work highlights each March 10 Statement by giving a detailed commentary on the existing situation, a few times with some minor inaccuracies, (a big one is that Tawang is not ‘a Tibetan village’).
It makes fascinating reading because it shows the evolution of a two-thousand old nation, which in 50 years is metamorphosed from a theocracy with all its imperfections into a modern State with democratic institutions.
Though not often reported by the world media, the Dalai Lama’s first and greatest gift to the Tibetan people is undoubtedly ‘Democracy’.
This collection of the March 10 Statements is the Tibetan leader’s log on this arduous path, often struggling against his own people, reluctant democrats. But, year after year, the persevering Dalai Lama managed to force into the Tibetans’ mind, the necessity of a more modern governance system.
Tenzin Gyatso knew that if ‘democracy’ was not imposed, after his passing into the Eternal Fields, Tibet would have two Dalai Lamas, like there is today two Panchen Lamas. The temptation would be too strong for political leaders in Beijing, to not choose ‘their’ own candidate.
This explains why the Dalai Lama recently told the BBC “The Dalai Lama institution will cease one day. These man-made institutions will cease.”
Soon after the events of March 10, 1959, the Dalai Lama secretly left Lhasa and took the direction of India and finally crossed the border, north of Tawang on March 30. During the following months, some 80,000 Tibetans joined him and settled in India.
On April 29, 1959 from the hill station of Mussoorie, the Dalai Lama formed a Tibetan Government-in-Exile, also known as the Central Tibetan Administration (CTA); a year later the CTA moved to Dharamsala, where it is still located.
The process of democratization then started. As a first step, on September 2, 1960, the Tibetan parliament-in-exile, then called ‘Commission of Tibetan People’s Deputies’, came into being.
On 10 March 1961, in his first Statement, the Dalai Lama formulated a draft Constitution of Tibet, incorporating traditional Tibetan values and modern democratic norms. Two years later, it was promulgated as the Tibetan Constitution-in-Exile.
The process continued during the following years; in 1990, the Tibetan Parliament was empowered to elect the Kashag or the Council of Ministers, which was made answerable to the Parliament. A Supreme Justice Commission was also instituted.
The newly-empowered Parliament soon drafted a new Constitution, known as the Charter of the Tibetans in Exile which defines the role of the three organs of the government: judiciary, legislature and executive. Today, the CTA functions as any democratic government. This fact deeply irritates China, which is still governed by a one-Party system.
The Dalai Lama has often had to fight to impose these democratic institutions on the Tibetan ‘masses’, who often thought that “the Dalai Lama is wiser, why do we need a human governance, when we have a divine one?”
But it shows the wisdom and the vision of the Tibetan leader, who knows that in the long run, democracy is a more stable system.
This book is a good addition to the large collection on the Dalai Lama; it documents a rare historical process, whereby a theocrat par excellence, decides to be the father of the democracy for his own nation.
What makes China so angry with the Tibetan leader is that Beijing is unable to follow his footsteps.
A Foreword of Prof. Robert Thurman is always a plus.
Posted by Claude Arpi at 6:21 PM