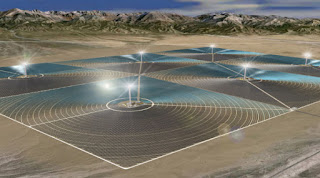 A French website recently reported that China is building a giant solar power plant in the desert.
It gave some details about China's latest ‘sustainable’ prowess: “A colossal complex emerges from the sand, right in the Gobi Desert at Delingha, in the heart of China's Mainland. The complex, constructed on no less than 25 km², is designed to generate power through solar concentrators, one of the cleanest and secure electricity production methods to date.”
That sounds great.
The article continues: “Despite its poor ecological balance, China is making considerable efforts to limit as much as possible its carbon emissions. It has become the largest investor in renewable energy in the world. Given the high demand for energy of its 1.3 billion people, projects for clean energy are proving equally colossal.”
Still great! 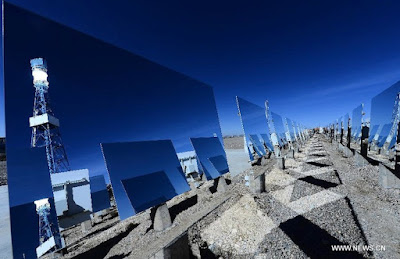 Located in Haixi [Mongol and Tibetan Autonomous Prefecture, locally known as Qaidam Prefecture] in Qinghai province [formerly Amdo province of Tibet], "in the heart of the Gobi Desert [?], Delingha is one of those outsized projects that attempt to pull the Chinese Republic into a more sustainable future. In practice, there is a vast complex where thousands of mirrors concentrate sunlight on large towers.”
The article explains that this technique should not be confused with a photovoltaic farm.
In Delingha, the heat generated by the sun is captured and converted into electricity by using turbines as in a conventional thermal power plant: “After its construction, with its 25 square kilometers, it will be the largest solar power plant ever built.”
The project is a collaboration between BrightSource Energy, a Californian company and the Shanghai Electric Group.
Apparently, the project aims at providing electricity to more than one million homes: “With molten salts capable of maintaining the stored heat the day, designers estimate that 7 hour storage time of solar power will be enough to guarantee a stable and continuous production of electricity.” 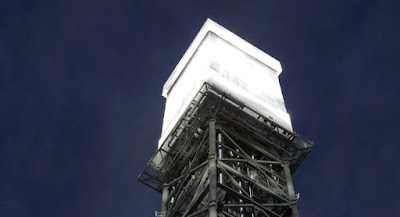 One could ask: where are all these houses in the desert?
But the website continues: “Beyond its own electricity production, the plant is expected to replace the equivalent of 4.69 million tons of coal per year (the main energy source in China), a reduction of 896,000 tons of emissions of carbon dioxide per year and 8906 tons of sulfur dioxide.”
Again great! But who needs all this electricity?
The article gives some details: “The first phase of the project is to fence the first two solar towers with a capacity of 135 megawatts each. A total of 6 mirrors fields (for 6 towers) will be provided, with the hope of starting production by 2017. At the end, the project is expected to save nearly 20 million tons of carbon emissions during its existence. With this effort, China hopes to peak emissions of carbon dioxide by 2030 and then decline.
Will it be sufficient to avoid an ecological crash?”
The conclusion is “Only the future will tell us.”
A few years ago, I mentioned Delingha on this blog.
Why?
Not for solar energy! 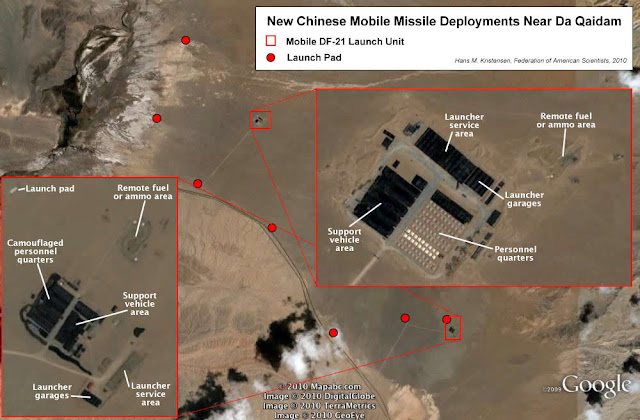 It is the main base for nuclear ballistic missiles in the Middle Kingdom.
I quoted from an article ‘DF-21C Missile Deploys to Central China’, written by Hans M. Kristensen for the serious Strategic Security Blog of the Federation  of American Scientists.
Kristensen said: “Analysis of commercial satellite imagery reveals that launch units for the road-mobile DF-21C medium-range ballistic missile now deploy several hundred kilometers west of Delingha in the western part of central China.” 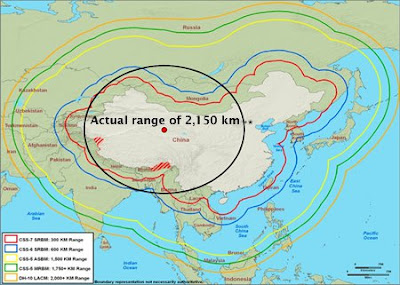 These medium-range missiles were (are?) targeting North India.
Now, the desert site will be supplied by solar energy.
We can not say 'great' anymore!
Read Kristensen' article, you will understand for what the solar energy produced in Delingha is for.
But it is certainly not to feed electricity into one million houses.
Posted by Claude Arpi at 3:09 PM