Interesting correspondence between the Dalai Lama and Nehru (1960) 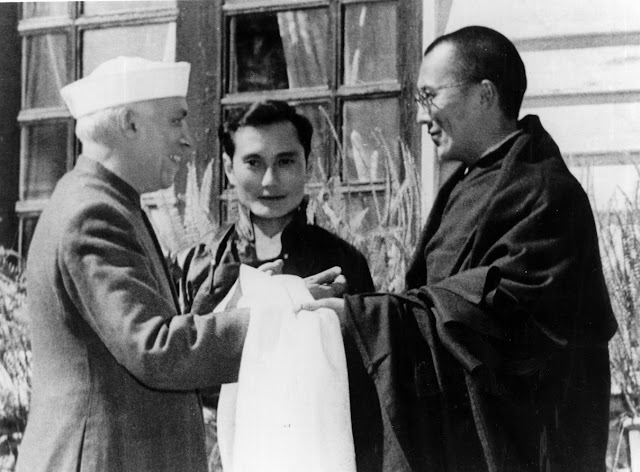 The Selected Works of Jawaharlal Nehru recently published an interesting exchange of letters between the Dalai Lama, who a year earlier had taken refuge in India, and the Indian Prime Minister.
The main subject of this exchange is the Tibetan appeal in the UN and the role of Gyalo Thondup, the Dalai Lama's elder brother.
A first UN Resolution was passed in 1959 (see text) and the presence of Gyalo Thondup in New York at that time was deemed necessary by the Dalai Lama to coordinate a second resolution.
The Government of India however refused to grant an Exit (and No-Objection-to-Return) Visa to Thondup to prepare the second appeal. The reputation of Thondup and the fact that his was a Taiwanese probably compounded the issue.
The correspondence is particularly interesting because Gyalo Thondup has recently been in the news after the publication of his memoirs, The Noodle Maker of Kalimpong.
It is a fact that the Dalai Lama’s brother has always been a controversial figure, often very close to the CIA. While many saw him as a great patriot, fighting for Tibet’s independence, others believe that he was a bad influence on his brother (it is the view of the Indian Prime Minister)
At the same time, it is true that no Tibetan leader has had so close relations with the Communist leadership in China than Thondup. He is said to have travelled more than 50 times to Beijing to ‘negotiate’ his brother’s return to Tibet.
This exchange of letters also shows the difficult position of the Dalai Lama. Nehru was very much against an appeal in the UN, as he wanted to preserve for India what was left of the ‘brotherhood’ with Beijing, while the Dalai Lama believed that the international community should know what was happening in the Land of Snows and support the Tibetan people in their just struggle against Communist China.
Nehru believed (mostly after the awful Kashmir experience) that nothing can ever be ‘decided’ in the UN. He was probably right.
Since the early 1950s, Nehru had often to deal with Gyalo Thondup, more particularly in connection with the ‘melting’ of the Dalai Lama’s treasure, mentioned in Thondup’s book.
Questions had even been raised in the Indian Parliament on the 'treasure'; it was embarrassing for the Indian Prime Minister.
It should also been remembered that the Chinese Premier, Zhou Enlai had come to India in April 1960; he had 17 hours of talk with Nehru. India and China were keen to solve the border issue and at the time of this exchange of letters, the discussions between the ‘Officials’ of the 2 countries were going on in Delhi and Beijing.
Nehru did not want the ‘last chance’ to find a solution for the border to be jeopardized by a Tibetan appeal in the UN; this explains his attitude towards Thondup and the Dalai Lama.
Ultimately, a new resolution was passed in 1961, this did not help much the Tibetan cause. The border issue too was not solved and two years later, India and China clashed over what used to be the Indo-Tibet border.
There is no doubt that the Tibetan issue was at the centre of the 1962 conflict.


Letter from the Dalai Lama to Prime Minister Nehru

Time and again you have been kind enough to express, both publicly and in private, your deep sympathy for the people of Tibet in their sad and sorry situation, and this has given strength and courage to all of us, whether living in Tibet or outside. You have generously accorded us asylum in this holy land. You have given, and are still giving, all possible help for the rehabilitation of the unfortunate Tibetans in India. I have already addressed several letters to Your Excellency in this behalf and am most grateful to you for the kind interest you are taking in the matter.
Your Excellency has also evinced abiding interest in "the cultural kinship between the people of India and the people of Tibet." We have always believed that Tibet is a child of Indian civilisation and the people of India must be vitally concerned in the preservation of Tibet's distinct personality. I have, therefore, ventured to address this letter to you. Your Excellency must be fully aware of the grim tragedy that is now being enacted in Tibet. I have been receiving with profound sorrow harrowing accounts of oppression and murder. Hundreds of Tibetans, who have recently been pouring into India and Nepal, bear witness to this sad and distressing state of affairs. There are thousands of others who cannot escape and are threatened with death and destruction. I, therefore, feel, and feel very strongly that something must be done, and done now, to save the lives of these people. As Your Excellency is aware, I have unflinching faith in non-violence and have throughout the last ten years made earnest endeavour to pursue the path of peace. Unfortunately, all my efforts have ended in failure, and I am at present not in a position to help my people in any way. I believe, however, that a wise and far-sighted statesman like Your Excellency may be able to do something to bring about a speedy end to this unnecessary and indiscriminate shedding of innocent blood and a just and peaceful settlement of the Tibetan problem.
I fully appreciate the difficult position of the Government of India in this matter and have, therefore, no other alternative than to take such steps as may be necessary to appeal once again for mediation by the United Nations. I confidently hope that even if the Government of India cannot themselves raise the issue, they will kindly agree to help us in securing the support of other countries and in prosecuting our appeal. Your Excellency, my heart is heavy with sorrow, and I have written to you frankly and freely. I have every confidence that this letter will be taken in the same spirit in which it has been written.


Letter from Jawaharlal Nehru to the Dalai Lama


Letter from the Dalai Lama to Prime Minister Nehru
August 25, 1960

Will you kindly accept my sincere thanks for your letter of the 7th instant which I received on the 11th.

2. I am very glad indeed that Your Excellency has written to me frankly and openly and for this I am grateful to you. May I, however, respectfully say that there are certain statements in Your Excellency's letter which have caused me a great deal of pain and surprise. I refer to your statement that some of the activities carried on my behalf have caused you concern, particularly the activities of my brother Gyalo Thondup and one or two members of my entourage. Your Excellency is aware that I would not permit anything to be done, which might cause you concern and if you had been good enough to draw my attention, I would have promptly attended to the matter. As it is, I am at a disadvantage, for I am not aware of any such activity by Gyalo Thondup or anyone In my entourage. I shall be grateful if you will kindly let me know the nature of the activities and the persons who are carrying on such activities.

3. May I also refer to the statements regarding my brother Gyalo Thondup and the other members of the Tibetan Delegation which had been deputed by me to the last session of the United Nations? At the outset, I should like to assure Your Excellency that there is not the slightest foundation for the information which has been reported to you. You will, I trust, allow me to state the barest facts.

4. The Delegation stayed for about a fortnight at the Atheneum Court in London en route to the United Nations. The three members of the Delegation shared one room, and one of them had to sleep on a sofa. In New York, arrangements were made for their stay at the Waldorf Astoria by some prominent Americans, who have always been keenly interested in the affairs of Tibet. They paid about thirteen dollars a day for a single room and this could not be called an exorbitantly high rate keeping in view the charges which are made at some of the leading hotels in India. However, within a short while after their arrival in New York, they left the Waldorf Astoria for a cheaper hotel, as the American friends were insisting on the payment of their expenses, and they did not wish to be under obligation to any person, however well meaning he might be. I am sure, Your Excellency will agree with me that, in the circumstances, the expenses incurred by my representatives could not be described as lavish. Nor did they spend any large sums of money on entertainment, whether official or otherwise. Indeed, within the small allotment of dollar exchange granted to them it was impossible for them to live lavishly and in expensive hotels. What was, however, expensive were the fees paid to American lawyers and others by the Delegation for the purpose of obtaining the best possible advice.

5. As regards the serious allegation made against my brother that he has been collecting money for the relief and rehabilitation of Tibetan refugees and that he may not have given full account to me, with due deference, I would like to state clearly that this is completely untrue. The members of the Tibetan Delegation did indeed pay visits to various charitable organisations, but they did so at the request of such organisations and only to thank them for the contributions they had already made to the Central Relief Committee in India and to suggest to them that they should continue to remit direct to the Committee whatever funds were available. The only contribution that was directly received by my brother was the sum of forty-one dollars handed over to him personally by a few Buddhist disciples from Inner Mongolia. All these facts can easily be verified. I may be permitted to add that we have heard of a person who has been giving currency to such reports, and have documentary evidence to prove conclusively that these reports are not in accord with facts. If necessary, I trust that, in all fairness and justice, Your Excellency's Government will be pleased to grant to my brother and his associates the opportunity to substantiate the statements which I have made. In this connection, I would also like to emphasise the fact that, in all their dealings, the members of the Tibetan Delegation have never failed to praise, as they should, the help and assistance which I and my people have always received from the Government of India. Nor have they hesitated to contradict observations prejudicial to the interests of India made by other people. I trust I have succeeded in making the position clear to Your Excellency.