Ouragan over India in the 1950s 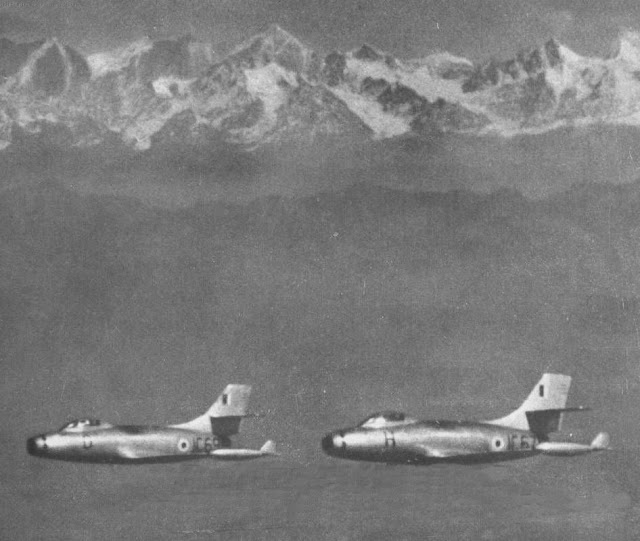 Despite the cancellation (or postponement) of the French Defence Minister, Jean-Yves Le Drian's visit to India, the 'Deal' for 36 Rafale fighter planes, should soon be signed.
It is at least what the Indian Air Force hopes.
Narendra Modi's decision to purchase the planes 'off-the-shelf', during his April visit to Paris, was a quick, pragmatic, and smart move.
He brought the IAF's 'critical operational necessity' on the negotiating table, while dropping the Medium Multi-Role Combat Aircraft framework.
Waiting for the final deal to be signed, it is interesting  to read a letter sent by H.S. Malik, India's Ambassador to France to the Prime Minister Jawaharlal Nehru in October 1953.
At that time, India had just purchased 71 Ouragans (known in India as Toofanis) from the same Dassault.
Incidentally, the new avatar of Dixmude (the third one), has recently made the news. It is a helicopter carrier of the French Navy and an amphibious assault ship of the Mistral-class.
France was to deliver 2 Mistrals to Russia, but decided at the last minute to put off the deal and refund Moscow, in protest against the Russian intervention in Ukraine/Crimea.
A ship, with the same name Dixmude, brought the Ouragans to India in 1954.
Just a coincidence!

Here is Malik's letter to Nehru.
Let us remember that the question of the French settlements in India was not solved at that time. The de facto transfer of Pondicherry and the 3 other settlements (Yanon, Mahe and Karikal) will only take place a year later (November 1, 1954).