As the dust is settling down on the Potala Square in Lhasa, the time has come to take stock of the ‘grand’ event held last week in the Tibetan capital, namely the celebrations for the 50th anniversary of the foundation of the so-called Tibetan Autonomous Region (TAR); in other words, the dismemberment of the Roof of World in 5 parts (with the TAR remaining the largest one, parts of Tibet are now administered by Sichuan, Yunnan, Qinghai and Gansu provinces).
Beijing has been preparing the events for months.
Imagine, 2 White Papers published since March 2015, a full Politburo meeting (on July 30), a two-day Sixth Tibet Work Forum (on August 24 and 25), a new Leading Group on United Front Work to deal with Tibet affairs and numerous high-profile visits to Tibet reported from time to time on this blog.

Why should China spend so much time and energy on Tibet?
The Chinese propaganda will probably tell you: China loves Tibet.
A few days ago, China Tibet Online announced a photo contest on ‘Charming Tibet’ to be held in Beijing: “The event aims to provide a platform for Tibet enthusiasts and photography lovers to showcase and share the charm of Tibet through their lens. Outstanding photos will receive awards. …In order to objectively present Tibet’s achievements in economic development, peace and stability in Tibet over the past 50 years, the event encourages all amateur and professional photographers, domestic college students and foreign students to show to the world a real Tibet through their cameras.”
Today, everyone in China loves 'charming' Tibet .

Tibet is indeed ‘charming’ and Beijing is ‘rejoicing’.
On September 10, an article in China Daily says: “The now-50-year-old Tibet autonomous region has every reason to rejoice: The national regional autonomy mechanism is working well and benefiting ordinary Tibetans.”
This is the Golden Age, according to the Communist leadership, which takes the occasion to demolish the Dalai Lama’s Middle Path approach: “Yet the 14th Dalai Lama and those in Dharamsala of India will not be sharing the festive mood, for this is not what the Dalai Lama wants. The ‘high degree of autonomy’ he advocates is de facto independence. He wants the central government to forsake any military presence in the region and for the region to conduct its own diplomacy. This would mean the region becoming an independent sovereignty entity.”
It is not what the Dalai Lama has been advocating, but it is irrelevant for Beijing, which continues with its propaganda: “But for that to happen, he would first have to overturn the established jurisprudential truth that Tibet is a part of China. Which is impossible.”
It seems impossible today!

The doors to the negotiations are closed
This is one of the visible outcomes of the grand celebrations: the doors are closed for the Dalai Lama to discuss any ‘degree of autonomy’ with the Communist authorities in Beijing.
I arrived at that conclusion a few years ago, in my book The Negotiations that never were, but now Beijing openly says so, and it adds: “Even among the country's autonomous regions, Tibet has been the subject of envy for the policy favors it has received. Financial subsidies from the central government accounted for almost 93 percent of financial expenditures of Tibet from 1952 to 2014, not to mention the endless aid programs provided by dozens of central government offices, provinces and major State companies. And the sixth central conference [Sixth Tibet Work Forum] on Tibet has just promised further efforts to improve local living standards.”
Will economic measures be sufficient?
Beijing knows that it will not suffice, and that why the leadership is so nervous about the ‘stability’ of the region.
This was reflected in Yu Zhengsheng's program while in Tibet. 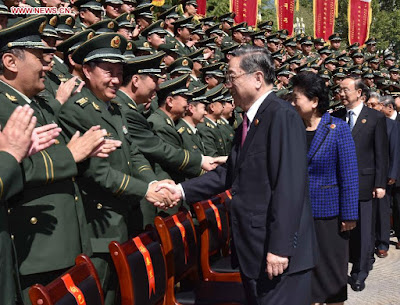 Yu met the generals: the Stability of Tibet
Apart from the political issue which seems sealed for the time being, to analyze the recent events on the Roof of the World, one has to look beyond the glamourous function in front of the Potala Palace.
In China, side-visits often speak more than grandiose parades.
Take for example the meeting of Yu Zhengsheng, chairman of the Chinese People's Political Consultative Conference (CPPCC) with the representatives from the People's Liberation Army (PLA) and the People’s Armed Police Force (PAPF) posted in Tibet.
On September 7, Yu took the opportunity to urge the army, the police and the judicial staff “to crack down on separatist forces and be ready to fight a protracted battle against the 14th Dalai clique.”
Yu also asked the defence forces “to improve their abilities of governing Tibet according to law [sic], specifically cracking down on the separatist forces, strengthening social management and protecting the people's rights.”
The defence forces should uphold the correct ‘political direction’ and exert a larger role for safeguarding border stability and ethnic solidarity.
Yu also addressed through video conference the defence staff posted at the ‘stability-maintaining command centers’ in the seven prefectures across the plateau region, says China Tibet Online.
Yu praised the army, police and judicial staff's contribution to Tibet's stability and development, calling them a strong team that the Party can trust and the masses can rely on. 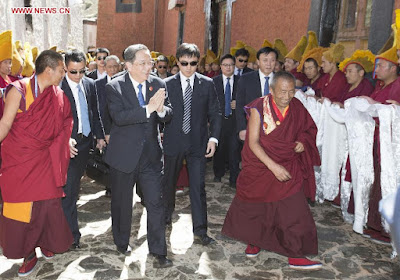 The Visit to Tashilhunpo monastery
The Chief Guest of the TAR’s ‘celebrations’ also visited Shigatse and the Tashilhunpo Monastery, the traditional seat of the Panchen Lama, as pointed out by the Chinese press.
But, as mentioned in a previous post, Gyaltsen Norbu, the Beijing-selected Panchen Lama, was nowhere to be seen.
He should certainly have been present in ‘his’ monastery, the Tashilhunpo, to receive the eminent member of the Politburo's Standing Committee.
His absence speaks a lot about the climate of insecurity in which the Chinese leadership lives. Beijing can’t even showcase their selected ‘leader’ and head of monastery!
Here too, like in Jokhang, Yu Zhengsheng held a banner with President Xi’s words, "Enhancing ethnic unity, building a beautiful Tibet”.
In his speeches, Yu highlighted again and again the importance ethnic unity and social stability.

‘Ethnic Unity’ probably means ‘Unity between Hans and Tibetans under Han leadership.'
Yu affirmed that “the top priority of work in Tibet at present and in the near future is to strengthen ethnic solidarity and safeguard national unity, promote economic development while improving people's livelihoods, and to enhance social stability and harmony.”
Stability, stability, stability is the new Mantra of the Land of Snows.
In the monastery, Yu urged the Lamas “to observe religious precepts and national laws at the same time, further advance their religious studies.”
The Sutra of Stability to start with, Nirvana can wait!

Yu inaugurates the Lhasa-Nyingchi road
Perhaps more importantly (for India at least), Yu Zhengsheng presided over the opening ceremony of the new four-lane highway linking Lhasa with Nyingchi.
It is “expected to help tourism, assist regional industrial transformation as well as preserve border stability and bolster ethnic unity,” said Yu.
And like for any infrastructure in Tibet, it will have dual use: civilian and military.
Nyingchi (or Nyingtri for the Tibetans) is the prefecture bordering the Indian border (Arunachal Pradesh), still today claimed by China.
The article speaks of Dagze county as the terminus of the highway; it it probably Dagze Village, where the Benri La Mountain is located, 28 km of Bayi town (the PLA headquarters). It is a sacred site for the Bön tradition and one of the four great holy mountains in Tibet.
The construction of the highway started in 2013 and it has been built with an estimated investment of 6 billion U.S. dollars.
It is a game changer for India, but who is bothered in Delhi?
According to the information of Tibet Business Daily, the high-grade highway between Lhasa and Nyingchi is expected to start a trial operation on September 15.
On September 10, 2015, reporters drove from Lhasa to Maizhokunggar (Meldro Gungkar) County east of the Tibetan capital, testing the Lhasa-Nyingchi high-grade highway on this section. The whole journey took only  40 minutes.

General Zhang Yang visits Western Tibet
Xinhua reported that on September 9, General Zhang Yang, head of General Political Department of PLA and member of the Central Military Commission, visited Ngari Prefecture.
He was accompanied by Lt Gen Xu Yong, commander of the Tibet Military District Party (note that Ngari depends from the Lanzhou Military Area Command (MAC), while Central Tibet belongs to Chengdu MAC; therefore technically Lt Gen Xu Yong was not in his jurisdiction).
Zhang arrived by plane at Alikunsha Airport in Ali (Ngari) Prefecture, one of the 6 main airports in Tibet.
It is not said that if General Zhang Yang visited the close-by border areas (adjacent to Ladakh), though he was seen inspecting an ecological agriculture park in Gar[tok] County of Ngari Prefecture.
Did he go and see the seagulls (and the speedboats) on the Tibetan side of the Panggong Lake?
It was not mentioned by the Chinese press.
What is interesting to note is that it is the boss of the ‘Political Department’ who was selected to represent the PLA during the ‘celebrations’.
Does it mean that the 'political' situation is not 'stable?
Stability has certainly been that main focus of the recent Tibet celebrations and ‘Political Stability’ is bound to remain the Mantra for the years to come.
Bringing millions of tourists will not help solve the issue.
Posted by Claude Arpi at 1:47 PM