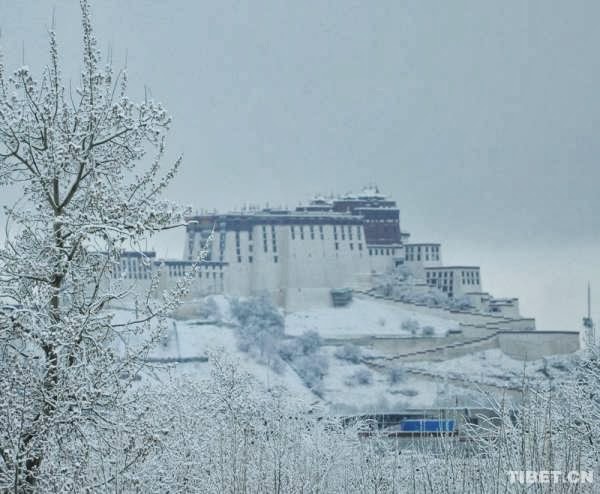 Not because the Tibet New Year (Losar) approaches, but because the regional leaders will move to Beijing to pass their yearly tests during the National People’s Congress (NPC) and the Chinese People's Political Consultative Conference (CPPCC), statistics have started pouring from the Roof of the World.
On February 27, Xinhua News Agency announced that Lhasa's economy had ‘rapidly’ improved in 2013. The local Lhasa Development and Reform Committee released the data for the gross domestic product (GDP) for the Tibetan capital for 2013.
Lhasa accounts for 39 % of the GDP of the Tibet Autonomous Region (TAR); it reached a record 31.2 billion yuan (5.07 billion US $), which mean an increase of 20% compared to the previous year.
In 2013, the total retail sales of consumer goods of Lhasa attained 2.4 billion US $, accounting for 51.9% of the region’s sales; it marks an increase of 20% compared to 2012.
The public financial revenue achieved 813 million US $, 52.6% of the TAR; it represents an increase of 46% from last year.
The per capita urban disposable income hit over 21,421 yuan (about 2,500 US$), a 9.6% increase from the previous year. The regional of the TAR average is 1,229 yuan lower than the capital.
The per capita net income for farmers and herdsmen is 8,537 yuan, an increase of 20.45%; it is now higher than the regional average level with 2,010 yuan.
Well, it is not clear how many herders and farmers live in the big city. These figures have obviously to be taken with a pinch of salt, like any Chinese statistics; remember the bumper crops during the Great Leap Forward!
The report quoted by Xinhua seems to indicate that the ‘farmers’ are working in some of the numerous attraction parks: “Lhasa vigorously promoted the green industry in 2013 with an aim to protect the fragile plateau environment. Till now, the total area of featured industry like planting saffron crocus, peony and blueberry has totaled 20,000 mu, bringing a 15% more in the per capita net income for the local farmers and herdsmen,” commented Xinhua.
This data does not show the compared incomes of Hans and Tibetans. While it is clear that herders and farmers are Tibetans (their income is practically one-third of the other urban dwellers), to whom relates this figure of 21,421 of ‘disposable income’? To the Han tour operators, hoteliers, caterers or local Tibetans?
Unless this is clear, the above figures mean little except for the local leaders to tell their ‘central’ bosses in Beijing during the Two Meetings that Tibet is doing well.
The report also says that the industrial added value reached 3.2 billion yuan in 2013,while the manufacture output value was 7.9 billion yuan and the manufacture revenue 590 million yuan; respectively an increase of 20%, 25% and 30% on the previous year.

Now about Chinese tourists
Dong Tianlin, an official with the local tourism bureau in Lhasa affirmed that Lhasa only received nearly eight million tourists in 2013. This is out of 13 million for the entire TAR.
Xinhua commented: “Renowned as the ‘Sun City’, Lhasa saw a 22.76% year-on-year increase in tourist arrivals from China and overseas last year.”
Obviously, Lhasa is still a ‘Sun City’ compared to foggy Beijing.
In 2013, tourism revenues in the city reached a whopping 1.34 billion U.S. dollars, an increase of 25.47% compared to 2012.
Dong proudly stated that tourism has become one of the leading economic growth engines for the TAR; local authorities and tour companies “have figured out various ways to attract travellers in off-peak season, such as offering lower prices during the winter.” Dong gave the example of the ticket price for Potala Palace which was cut by half to 100 yuan per person in winter.
Sales Season!
Dong Tianlin also explained that the authorities are developing other ‘attractions’ such as special tourist itineraries during important Tibetan festivals. One of them is Losar, the Tibetan New Year (falling on March 2 this year). It appears that Han tourists have started flocking to the streets of Lhasa to click pictures (and selfies) of the exotic Tibetan capital and its inhabitants.
‘Exotic’ is the key word.
Xinhua admits that major travel agencies in Lhasa are selling ‘specially designed packages’ for Losar, “giving tourists a chance to visit Tibetan families, taste the New Year feast, worship the sacred Jokhang Temple and attend a Sutra chanting ceremony.”
Is it good for Tibet?
A Chinese tourist Li Daiyun from Hunan Province said that she tried to wear traditional Tibetan shuba (dress) in one of the city's streets:"I have better understood Tibetan people by tasting their cuisine and sharing their festive mood."
That’s easy, let us hope that she has really got a better 'understanding'!

Cars on the Roof of the World
Another area of ‘progress’ is the number of cars in the streets of Lhasa. It is quite frightful.
Xinhua mentioned: “With over 150,000 cars in Lhasa, and the number growing by 200 a day, the bittersweet joys of the modern auto industry are hitting the ancient city hard.”
Dong Zhihong is director of the Lhasa Vehicle Management Station told Xinhua that poor traffic management and bad driving brought regular traffic jams to the 1,300-year-old city, “a city which, until 60 years ago, did not even have a highway.”
The authorities admit that during rush hour, downtown Lhasa routinely ‘slips into gridlock’ and parking spaces are almost always impossible to find.
China Tibet Online, an official website said that Tibet's vehicle ownership is ‘one for ten people’ and it exceeds the national average (one for 13). It frankly comments: “Whether Lhasa can avoid systemic traffic problems of most big Chinese cities is a question which will test the foresight of Lhasa's government.”
But the local Government is mainly interested to get more revenue to show the bosses in Beijing how well they are doing.
In Lhasa Municipality has the highest vehicle ownership in Tibet (one for six people). Can you imagine that every year, nearly 80,000 people take the driving test?
He Gang of the Tibet Academy of Social Sciences told Xinhua that he believes that today Tibetans have said goodbye to the days of struggling to make ends meet and embraced the auto era.
He Gang explained: “Equestrian culture is deeply ingrained in the Tibetan consciousness after aeons of nomadic herding,” however today cars are “quickly supplanting horses as a popular family asset, along with the customary yak, cattle and sheep.”
This reminds me of the Baby Austin owned by the Thirteenth Dalai Lama. It was dismantled in India to be sent over the Himalayan passes. It seems that the Dalai Lama was using it from time to time to inspect the gardens of the Norbulingka Summer Palace. It had to be started with a hand crank and was driven by Khunpela, one of the Dalai Lama’s attendants.
A Tibetan Nyima recently told Xinhua: “A horse, a gun and a knife used to be the standard equipment for a Tibetan man to set out for his dreams. Now, we barely ride horses. When tending the flocks, we ride motorcycles."

And for cars, you need more roads.
Interestingly, the Communist government wants to concentrate on monasteries, probably to control better the restive monk population.
Tashi Gyatso, a senior official with Tibet's transport department announced that the TAR will spend 32.67 billion U.S. dollars for building new roads and repairing old ones in the next six years.
That is a lot of money.
How much goes to strategic roads leading to the Indian border is not known.
Officially, the campaign is “driven by the need to make monasteries more accessible. Tibet had paved roads leading to 813 registered monasteries and other religious venues by the end of 2013.” Many of the 1,700 ‘registered monasteries’ are still not connected by road.
The TAR government plans to have blacktop roads linking over 80% of the Tibetan townships and more importantly to ‘complete’ the construction of the road linking Lhasa and Nyingtri, north of the McMahon Line: "It could reduce the driving time from Lhasa to Nyingtri by more than two hours," said Tashi Gyatso. It could also help to bring reinforcements to the Indian border in case it is required.

The TAR has today 70,591 km of road; this should reach 110,000 km by the year 2020. According to the TAR’s statistics, last year, Tibet spent nearly 2 billion US $ on road projects, an18.8 % increase compared to 2012 and 167 villages and 21 townships have now been linked by blacktop roads.
Although Tashi Gyatso said that Tibetan people have long hoped for “improvements to the region's poor transport infrastructure, which has hindered its economic and social progress”, the fact remains that many of these roads will be used by the PLA to reach India’s borders.
This will not be shown in the Defence Budget to be announced next week.
Posted by Claude Arpi at 7:40 AM