The Train on its way to Southern Tibet 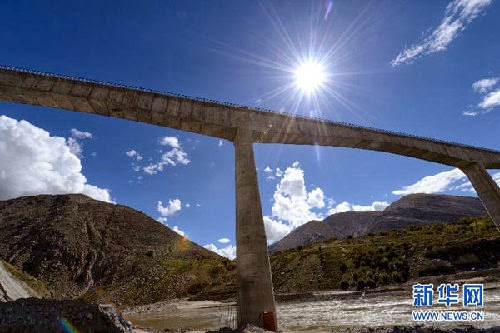 While the Indian press says that AK Antony has been the worst ever Indian Defence Minister (read India Today's article) and the Minister himself says he has done so much for Indian defense preparedness, China is laying railway lines in Tibet at a frantic pace.
The latest section to be started in September will link Nyingchi (or Nyingtri in Tibetan), north of the McMahon Line to Lhasa (and the mainland). China Tibet Online yesterday reported 'Lhasa-Nyingchi Railway to be launched within the year'.
According to another website, ChinaTibetnews.com: "Lhasa-Nyingchi Railway is expected to start construction within 2014 soon after the completion of Lhasa-Shigatse Railway construction that is scheduled in September."
For the first time, details are given about the strategic line: "Running 433 kilometers and covering 34 stations including nine major ones, Lhasa-Nyingchi Railway will build 402-kilometer new lines, which is designed to have a speed of 160 kilometer per hour with a declared investment of 5.4 billion US dollars."
Yang Yulin, a deputy director of railway office of Tibet explained that the Lhasa-Nyingchi Railway will start from the Shelrong Station on the Lhasa-Shigatse Railway (to be completed in September); it will then cross the Yarlung Tsangpo River (Brahmaputra) and heads towards the Lhoka Prefecture to finally arrive in Nyingchi.
The article admits that today, the communication and traffic with Nyingchi and the Lhoka Prefecture depends only the highway and an airport, near Bayi town (the main PLA cantonment in Southern Tibet) in Nyingchi Prefecture.
China Tibet Online asserts that this line of communication suffers from a number of disruptions as "special weather conditions may break down the land and air routes occasionally".
More interestingly, it adds: "the abundant natural resources also call for a stronger transportation support of the area."
'The abundant natural resources' probably refers to the rich mineral resources of Tibet which are wildly exploited, but also to the power generation potential of the Great Bend of the Yarlung Tsangpo/Brahmaputra. See my article on the diversion of the river.
It means that everything is slowly coming into place to make the mega project feasible.
The rest of the article is more obscure. It says: "Furthermore, a world-class landscape gallery would be formed after the construction of Lhasa-Nyingchi Railway, which will connect not only the tourism resources along the line, but also famous scenic areas such as Jiuzhaigou Valley [Valley of Nine Villages, a nature reserve in northern Sichuan], Yellow Dragon Scenic Area [Huanglong, a scenic area of and historic interest in northwest Sichuan], the Qinghai Lake [Kokonor lake], as well as tourist cities including Chengdu, Dali and Lijiang [both Yunnan], through a railway network covering Chengdu-Nyingchi Railway, Yunnan-Tibet Railway, Qinghai-Tibet Railway and Lhasa-Shigatse Railway."
It probably signifies that China is planning to complete the loop, Xining-Lhasa-Shigatse-Nyingchi-Chengdu-Kunming, to promote tourism and harness Tibet's rich natural resources.
Posted by Claude Arpi at 5:10 AM