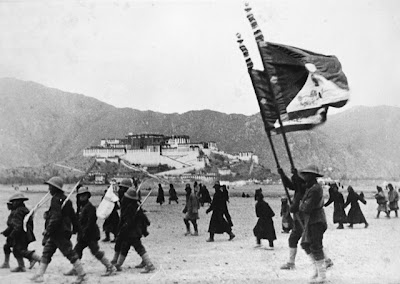 Phuntso Wangye, the veteran Tibetan Communist leader, an outspoken critic of Beijing's hardline policies towards Tibet died yesterday in Beijing.
He was 91.
"Phuntso's son, Phunkham, told Reuters "He left this morning. Before his death, he was a Communist Party member. After his death, we have invited lamas to pray (for his soul) according to traditional Tibetan culture."
The Dalai Lama was probably immediately informed of the death of his former translator.


A couple of years ago, I wrote an article on an interesting story about the Tibetan flag. It is reproduced below: